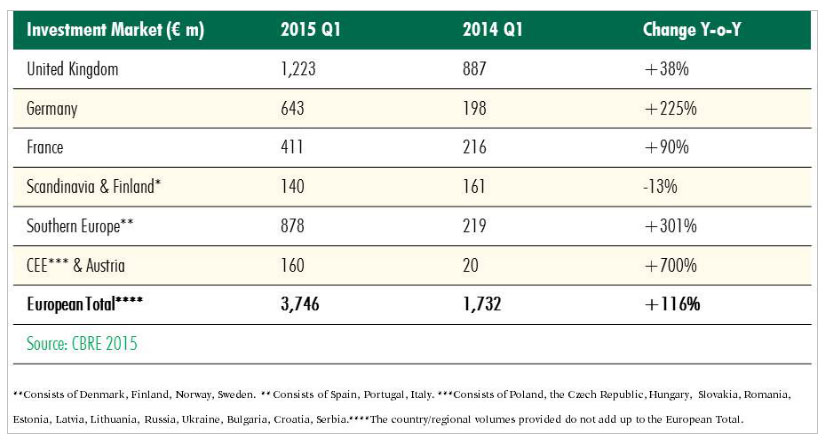 European hotel investment has seen year-on-year growth of 116 percent reflecting the strength in hotels as a growing commercial property asset class, this has been led by a number of factors including high investor appetite for consumer driven real estate asset classes in a time of low inflation and rising consumer spending.

Hotel investment activity in nearly all European countries was significantly higher in the first quarter (Q1) of 2015 compared to Q1 2014. The UK, France and Germany presented strong growth in Q1 2015 with investment volumes increasing by 38 percent, 90 percent and 225 percent respectively year-on-year.

The UK will continue to see strong trading growth on the back of expected economic growth and limited supply risk. Whilst the German transaction market is likely to remain hot in the coming quarters as the availability of operational leases attracts a growing number of institutional investors at a time of low bond yields.

Southern Europe saw a substantial uptick in transaction volumes across the region in Q1 2015 reaching €878 million and up 301 percent year-on-year. The increase was largely due to a notable rise in Spanish hotel transactions which has attracted interest from private equity funds who are seeking value-add opportunities with strong growth potential.

Central and Eastern Europe (CEE) and Austria has also seen a sizeable increase in hotel transactions hitting €160 million in Q1 2015. This is mainly due to a spill-over of capital previously looking at assets in Western Europe, based on attractive yields and healthy trading performance data.

Joe Stather, Information and Intelligence Manager EMEA, CBRE Hotels, commented: “The surge in hotel investment volumes indicates the continuing investor appetite in hotels as an asset class. The opportunity for strong returns across the hotel space, coupled with high levels of liquidity will continue to drive transaction levels for the next 12 months in most European markets.”

Valentin Gavrilov, Director of Research, СBRE in Russia, said: “The Russian hotel segment is popular, but is quite a complicated investment asset. During the last 5 years investors acquired properties for around $2,35 billion, or roughly $0,5 billion per annum. Investors were focused on Moscow. There were transactions with both trophy assets and hotel chains, targeting budget clients. During first 4 months of 2015 only $15 million. were invested in hotels. Such a small amount is explained by the risks, which increased as a result of worsened macroeconomic situation. However, from the fundamental point of view, depreciated Rouble made it much cheaper for foreign tourists to travel across Russia. This positive change might fuel investors’ interest to the hotels, as well as stabilization of geopolitical risks.”