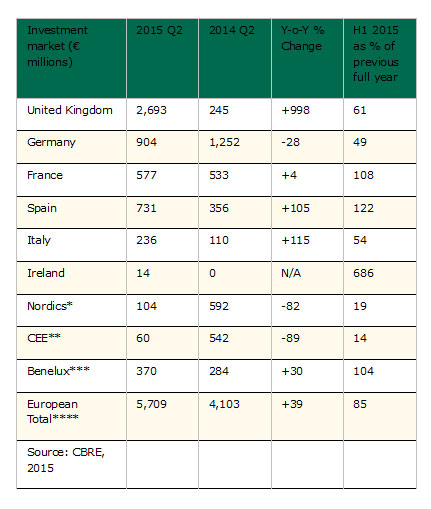 European hotel investment on course for €20 billion in 2015 – EuropaProperty

European hotel investment is set to burst through the €20 billion mark for the first time in the history of the asset class, according to the latest research from property advisor CBRE.

Joe Stather, Information and Intelligence Manager EMEA, CBRE Hotels, commented: “Taking into consideration the figures to date, pipeline of activity and historical deal trends, we are set for a record breaking year. The €20 billion threshold seems within reach and would set an unprecedented benchmark for European hotel investment; a realisation that the asset class is becoming progressively mainstream.”

The institutional appetite to invest in core real estate has heightened considerably thanks to low interest rates and the associated impact on bond yields. Countries where the hotel landscape was considered to be further along in the cycle, such as Germany, France and the UK, continue to register mounting deal volumes, attracting significant institutional interest and a growing weight of Asian capital.

The UK investment market remains popular with traditional investors as well as new entrants. At €2,693 million, the Q2 deal volume for the UK exceeded the long-run quarterly average by over €2 billion.

North American opportunistic capital having targeted Spain’s economic recovery is now also contributing to a rise in Italian deal volumes (currently €236 million), €148 million above the long-term quarterly average. Most of the interest has registered in strong tourism locations such as Venice and Rome where robust trading performance has been underpinned by increasingly mobile North American, Northern European and Asian travel markets.

Despite a relatively slower second quarter, Irelands H1 deal volume is already €442 million ahead of the total transaction volumes achieved in 2014. Irish hotel deals that seemingly monopolised the headlines over the last 24 months have centred around non-performing debt – some of these assets are now coming back to market as equity and thus making a mark on the country’s investment volume.

Yields continue to strengthen across most European markets and while confidence remains in trading performance growth, assets encumbered by a franchise agreement are achieving lower yields than those operated under a generally less-flexible management contract.

Valentin Gavrilov, Director of Research, СBRE in Russia, said: “During 2011-2014 a number of landmark Moscow hotels acquired new owners. Given the length of the investment cycle in this segment, and the current economic situation in Russia, there is no surprise in the fact that investments in this segment in 2015 were negligible: just $15 million. Nonetheless, this does not mean low interest for this sector. Nowadays investor interest is primarily for the development of new projects, including regional. Significant Rouble depreciation has made Russia a much cheaper and attractive option for foreign visitors. In addition it has created prerequisites for the development of domestic tourism. Thus, investment attractiveness of this segment seems fairly obvious.”