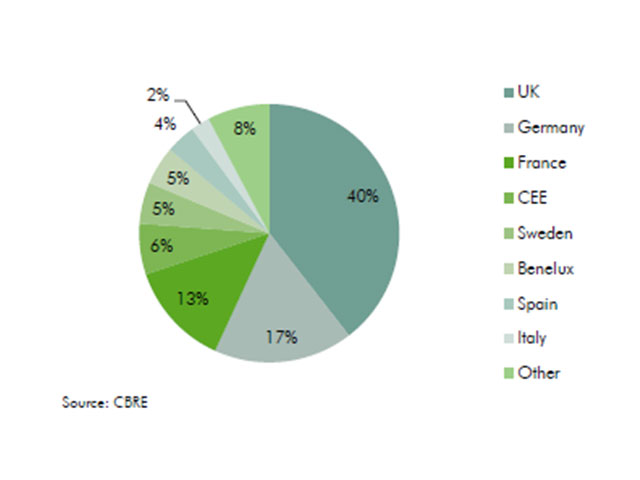 Commercial real estate investors are showing greater appetite for risk in Europe as the overall market continues to grow and the recovery in both Ireland and Spain gathers pace, according to the latest data from CBRE.

The trend of increasing commercial real estate investment that has been emerging in Europe over the course of this year continued in Q3 2013. Total investment reached €35.7 billion in Q3 2013 – an increase of 21 percent on the same quarter last year. This is also the highest quarterly total since Q1 2008, excluding the Q4 spikes of year-end investment activity.

Led by improving economic conditions and increased investor interest, significant growth in real transactional activity is apparent in Europe’s recovering markets, namely Spain and Ireland. Over the past eighteen months, Ireland in particular has seen a significant increase in investment levels. In Q3 2013 Ireland saw investment reach €462 million, compared to just €102 million in the same quarter last year, while the last 12 months have seen €1.33 billion worth of transactions. With €1,321 million worth of transactions in Q3 2013, investment in Spain is more than double the level seen in Q3 2012 at €531 million.

Marie Hunt, Executive Director, Research, CBRE Ireland, commented: “The volume of transactional activity in the Irish commercial real estate market in 2013 surprised many, with volumes more than trebling year-on-year as the process of deleveraging picked up pace to meet investor demand for Irish investment opportunities. We expect to see a similar volume of transactional activity occurring in 2014 as banks, borrowers and NAMA continue to bring assets to the market and some of the properties sold by way of loan sales in recent years start to be unwound.”

The core investment markets of the UK, Germany and France were still dominant in Q3 2013. Commercial real estate activity in the UK reached levels that have not been seen since 2007, with over €14 billion worth of transactions in Q3 2013 compared with €11.4 billion in Q2 2013. France also saw a significant increase in investment quarter-on-quarter, with Q3 2013 at €4.6 billion – €1 billion more in activity than Q2 2013.

Jonathan Hull, Head of EMEA Capital Markets, CBRE, commented: “Europe had an impressive third quarter in terms of investment activity and this trend is expected to continue in the final quarter of 2013. While core markets remain strong, with the UK showing remarkable levels of investment in Q3, sentiment continues to improve in Europe’s recovering markets such as Ireland and Spain. There is greater risk appetite in the real estate investment community, with many private equity groups seeking high yielding opportunities.”

Valentin Gavrilov, Director, Research Department in CBRE, Russia, said: “Eurozone GDP growth, coming back to positive figures, together with the first signs of decreasing unemployment rates will signal the end of the world economic crisis of 2008 – 2013. Foreseeing this signal, investors increase their risk appetite in order not to miss the start of a new cycle in asset prices growth. Investment in European commercial real estate are still just 50-70 percent of the pre-crisis volumes, i.e. growth potential in investment volumes is still considerable. Investors in the Russian commercial real estate sector have started their acquisitions much earlier. In 2013 we might see 10-20 percent growth in their operations. The Government’s ability to turnaround decreasing GDP growth rates is a key Russian macroeconomic concern now.”