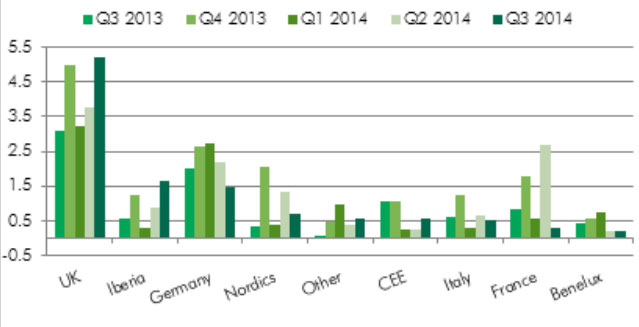 European retail investment reached €33 billion in the first nine months of the year, the highest total for this period since 2007, according to the latest research from CBRE. For Q3 alone, investment volumes reached €11.1 billion, a 23 percent increase on turnover for the same quarter in 2013.

Investor sentiment is also improving for retail properties in Central and Eastern Europe (CEE), despite the current political situation and following two quarters of relatively muted activity. Romania saw one of CEE’s largest retail deals in Q3 2014; the Immochan acquisition of a €261 million retail portfolio. Russia also saw an uptick in investment over the same period, albeit from a very low base.

Investor interest in retail, across most of Europe, continues to strengthen and there has been a notable increase in the type and nationality of the investors. This, in turn, is generating further growth in competition. As a result, the CBRE EU-28 High Street and Shopping Centre Yield Indices reported significant quarterly compressions at 11bps and 13 bps respectively, for the quarter. Average weighted prime yields now stand at 4.42 percent for high street and 5.28 percent for shopping centres, their keenest since Q3 2007 (4.41 percent) and Q2 2008 (5.13 percent), respectively.

John Welham, Head of European Retail Investment at CBRE, commented: “We have a wider range of investors from more countries targeting retail investment in Europe than even before the global financial crisis. Most investors are using low levels of debt, if any, but we do see loan to values in transactions gradually increasing. In all likelihood the amount of capital – debt and equity – targeting European retail investment will soon exceed 2007 levels. This is putting increased downward pressure on yields.”

Iryna Pylypchuk, Director of EMEA Research and Consulting, CBRE added: “So far this year we have seen strong investor sentiment towards European retail and a growing investor pool, which is translating into a notable increase of international capital flows targeting the sector, as well as a steady stream of larger deals. With that in mind we expect strong investor competition to continue in Q4, with significant prospects of further yield compression and possibly a record high in terms of European retail investment market activity.”

Anna Melnik, Head of Capital Markets Research, Research department, CBRE, Russia, commented: “Despite all the government’s efforts the Russian economy continues to approach recession under the influence of Western sanctions, rouble depreciation, oil prices decrease and tightened lending conditions. Definitely, all these factors are having a negative impact on the attractiveness of Russian assets. The retail segment was one of the first to be at risk. In the previous years, investment in this sector accounted for 20-40 percent of the total, and traditionally it was on the 2nd place among other commercial real estate segments. In the first 9 months of 2014 the retail sector is in the 4th place with a total investment of USD 200 million, or 6 percent of the total volume. The main concerns are related to the large amount of new delivery in 2014-2015 and increasing pressure on rents. Nevertheless, investments in quality, income generating properties in this sector are seen as one of the most secure at the moment.”