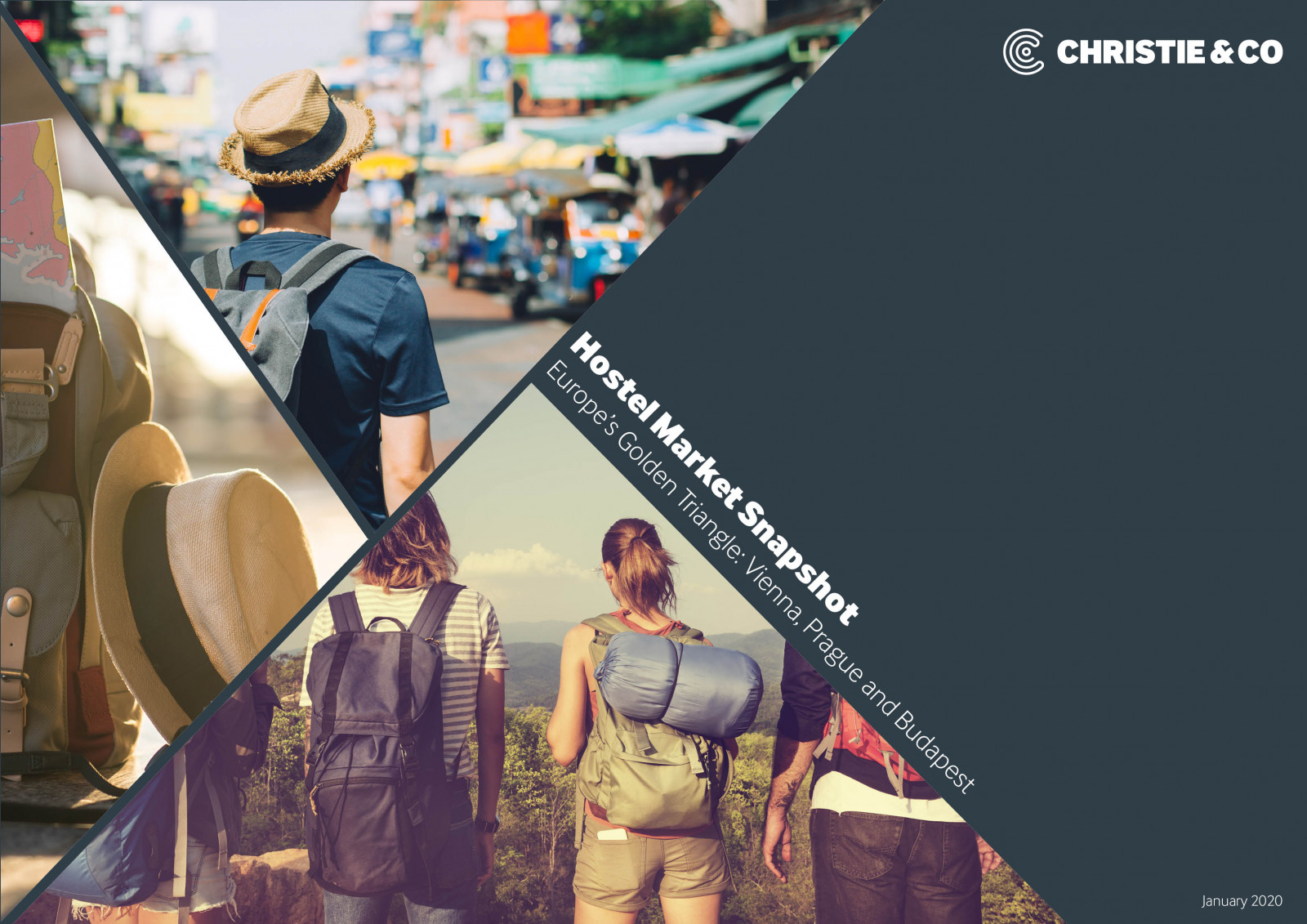 Specialist business property advisor, Christie & Co recently launched their new report focusing on the hostel markets in Vienna, Prague and Budapest. The report shows an overview of the business model itself, key characteristics, the evolution of the hostel concept and gives a deeper insight of the mentioned markets: Vienna, Prague and Budapest, in terms of demand, supply and especially branded supply.

The hostel concept first appeared during the German Youth Movement in the 1890s, but its commercial potential has only been recognised more recently. The European hostel market is still fragmented, but also fast evolving. Recent trends suggest that travellers increasingly seek more authentic, social experiences, while travelling for a longer period of time. In addition, they are more price sensitive and look for alternatives to the traditional hotel accommodation.

Vienna, Prague and Budapest were selected for comparison due to similarities in history, culture, city size and tourism volume and were analysed over a 5-year period. Overall, the hostel sector shows healthy grows in these three destinations, with all cities demonstrating stable performance.

Since 2013, Vienna has recorded a healthy evolution of its hostel sector, yet minor fluctuations reflecting a drop in supply were reported between 2014 and 2015. The market decreased from 18 to 15 hostels and the number of beds decreased by 4.4 percent. Industry experts state that the Viennese hostel market is not satisfied and demand for this type of accommodation is currently outstripping supply levels. Vienna is noted as having the highest level of demand when compared to Prague and Budapest. In 2018, 364,000 arrivals and 803,000 overnight stays were recorded. There are currently 1,000 hostel rooms under construction or being planned to launch in 2020 to increase supply.

Among the three analysed cities, Vienna has the largest proportion of branded supply. Almost half of all hostels belong to a branded chain, with most operating under the Meininger brand, followed by A&O and Wombat’s. In addition, two new openings are planned for 2020 in Vienna: the launch of Superbude and the Student Hostel will increase the bed supply in the hostel segment by 50 percent

Bed supply in Prague has developed significantly over the analysis period. Prague counted 46 hostels in 2018, however the number of beds rose at a faster rate than the number of hostels. As such, the average number of beds per property has almost doubled, representing a trend in consumer preference towards larger hostels. In recent years, Prague has shown a significant increase with respect to arrivals and overnight stays. Although, the demand for hostels in Prague is the lowest among the analysed markets, Prague has reported the strongest growth over the analysis period. The number of overnight stays has significantly increased from 180,000 to 614,000 overnights. Arrivals have also increased from 73,000 to 274,000, which is an uptick of around 375% and represents a compounded annual growth rate of over 30%. In addition, Prague has the largest portfolio of international brands in the market, as well as an impressive proportion of local brands.

Budapest ranks first in terms of hostel supply, with the market reflecting the most significant increase in terms of numbers of hostels, growing from 43 hostels to 77 in 2018. Albeit, the report highlights there has been a decrease in the average number of beds per property, indicating a shift in consumer preferences towards smaller hostels in this city. The market has made tremendous progress in its hostel sector, reporting upward trends in the overnight stays and improved hostel performance, backed by increasing demand. In 2018 arrivals came to around 286,000 and the number of overnight stays grew significantly to 683,000 within the indicated period. Compared to Vienna and Prague, Budapest experienced the highest share of arrivals and overnights in total inbound tourism for hostels. Brand penetration in the Budapest hostel market is extremely low: only 4.5 percent of all beds are branded. Budapest shows the largest number of unbranded hostels, sitting about 80 percent. Due to the fact that there are only two international brands operating in the city, Budapest becomes an attractive opportunity for international hostels operators to enter the market.

Yannick Herzberg, Consultant Investment & Letting Austria & CEE at Christie & Co, summaries, “We recorded strong performance and high development potential over the 5-year analysis period and in all analysed markets. Overall the hostel product is evolving, and we anticipate the market to continue to grow and succeed in the future. Existing hostels should review and if necessary, transform their strategy, and adapt to the changing needs of today’s travellers.”