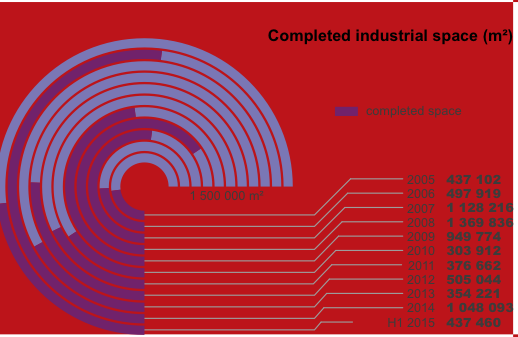 JLL has recently summarized H1 2015 and presented the key trends for the coming months on Poland’s industrial market. According to the property adviser, the market has witnessed strong demand for warehouse space, with tenants from the logistics sector maintaining their leadership, followed by retail chains and automotive companies. Additional, new warehouse regions are on the rise, with the market registering its lowest vacancy rate since 2007.

Tomasz Mika, Head of Industrial Poland, JLL, commented: “In the first half of 2015 gross demand for warehouse space hit 1,17 million sqm, with 781,000 being new contracts. Strong results in H1 as well as continued interest from tenants allows us to assume that 2015 is in with a chance of being another record-breaking year for the Polish market and exceed 2014’s excellent performance. Tenant demand has been matched by the immediate response from developers. Over 437,000 sqm of new industrial space was delivered within the first six months of 2015. An additional 672,000 sqm is currently under construction across Poland, 23 percent of which is being built on a speculative basis, without binding lease agreements.”

“Demand has become more and more geographically diverse, as still a few years ago the share of the five major regions in net demand amounted to 80 percent – 90 percent, as opposed to H1 2015 when it dropped to 74 percent. Locations that were previously viewed as peripheral, such as Kraków or Szczecin, as well as those whose first commercial industrial space has only been developed recently, such as Lublin or Rzeszów, have gradually taken on greater importance,” explained Jan Jakub Zombirt, Associate Director, Research and Consultancy at JLL.

The highest demand comes from logistics operators, who secured 229,000 sqm of new lease agreements (corresponding to the 29 percent share in the net take up), followed by retailers (26 percent) and the automotive sector (9 percent).
Since the end of 2013, vacancy rates have gradually declined. Total vacant space currently amounts to 686,000 sqm (7,4 percent – the lowest level since 2007). The lion’s share in available warehouse space is to be found on mature markets, such as Warsaw Inner City (13.7 percent), and so- called emerging markets, such as Lublin (25.5 percent). According to warehousefinder.pl, the lowest vacancy is the case for Poznań (1.5 percent) and Wrocław (4.5 percent).
“Taking into account the current market situation we expect general vacancy rates to be below double digits over the next few quarters. Although we are recording growth in speculative projects, which now account for 23 percent of stock under construction, the market – driven by strong demand – should absorb that space relatively quickly,” added Tomasz Mika.

In H1 2015, the supply of new warehouse space in Poland increased by 437,000 sqm, reflecting a 47 percent increase y-o-y. The largest projects delivered to market included an 82,000 sqm within Goodman Poznań Logistics Centre II and a 46,000 sqm P3 Mszczonów scheme. The majority of completions in H1 were delivered in the Poznań area (207,000 sqm) and Warsaw Suburbs (74,000 sqm).

Currently 672,000 sqm of warehouse space is under construction, with the majority (508,000 sqm) already pre-leased, while the remaining 154,000 sqm (23 percent) volume has been carried-out on a speculative basis.

Nearly half of Poland’s industrial stock is currently in the hands of the three largest market players and their business partners. Prologis claims 24 percent of the stock, followed by SEGRO (11 percent) and Logicor (10 percent).
The highest rents are typically a feature of Poland’s urban markets. The most characteristic industrial format to be found in these locations are referred to as SBU (Small Business Units), projects which combine an office function with a small industrial (warehouse or production) component. Effective rents in these locations are €4.8/sqm/ month in Warsaw, €3.8/sqm/ month in Wrocław and €3.7/sqm/ month in Łódź.

“In H1 2015, prices for industrial land in major regions remained relatively stable. Improvement in infrastructure has had a positive effect on further development of the established industrial regions and the seeding of new ones. Lublin has emerged onto the warehouse map, with new logistic parks located near the S12 ring road. Completion of the next stages of the A4 highway and express ways around Rzeszów is also set to have a positive impact on development in this region. In addition, a new exit road from Warsaw towards Katowice has been opened and is planned to be extended. This may be an additional stimulus for initiating new industrial projects in the south-western part of Warsaw, said Agata Zając, Associate Director, Industrial Poland, JLL.