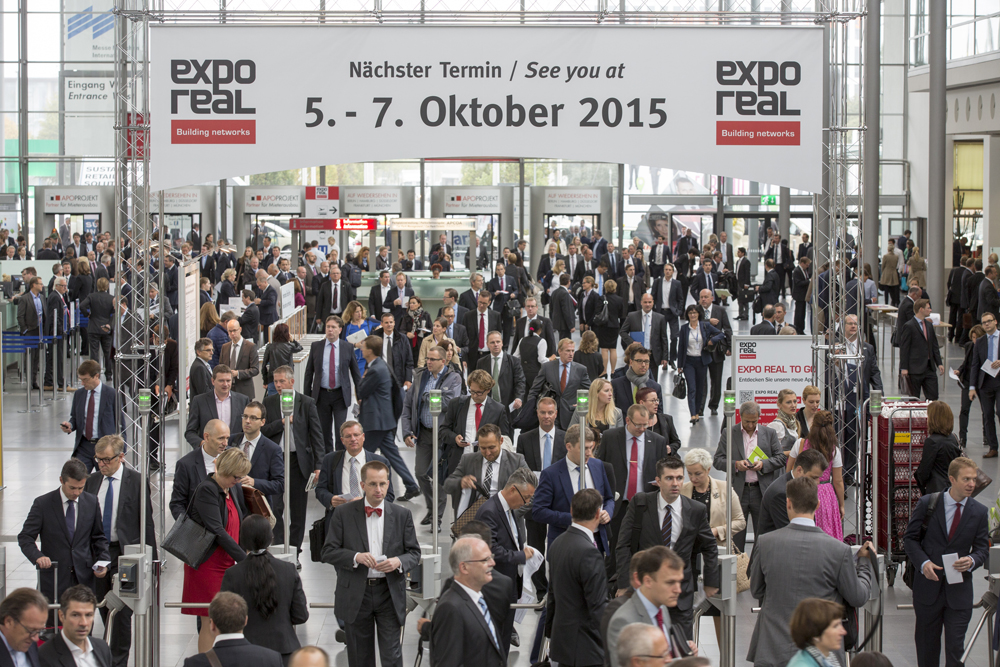 The positive mood in the investment and finance environment is continuing in the second half-year. That was the conclusion of the 17th International Trade Fair for Property and Investment. A total of 1,655 exhibitors from 34 countries took part this year. The 2014 edition of EXPO REAL recorded a slight rise in participation figures, by 2.5 percent to 36,900 professionals from 74 countries. Most of this increase was due to a higher international participation.

That was confirmed, too, by Piotr Bienkowski, Chairman of the Board of BNP Paribas Real Estate, Germany: “Once again in 2014 EXPO REAL has lived up to its reputation as a working fair. The appointment density was extreme, including many meetings with ‘newcomers’ from abroad.”

The international scope at the fair was also underlined by Ulf Buhlemann, Senior Executive Investment Germany at Colliers International, Germany: “Especially because of the presence of numerous foreign investors, EXPO REAL has become more attractive compared with last year. It has again confirmed itself as the most important meeting point for established and ‘new’ investors alike.”

One of these ‘newcomers’ is Michael Sales, Managing Director Europe, TIAA Henderson Real Estate, UK. He was delighted: “EXPO REAL is the major European real estate networking opportunity where investors, service providers and tenants are in attendance. We make 30 to 40 contacts per day, which normally takes us months back in London. EXPO REAL allows us to innovate.”

It was also the first time at EXPO REAL for Mikhail Men, Minister of Construction, Housing and Utilities of the Russian Federation; he, too, was impressed: “Taking part in EXPO REAL as an exhibitor is the first international appearance of the still fledgling Ministry for Construction and Housing of the Russian Federation. This debut is going very successfully for us. Here, it is not about pathos but real business. I am enthusiastic about the atmosphere and the businesslike contacts. We could not have wished for a better premiere.”

In Germany in particular, alongside the classical residential and office segments, the trend is towards alternative property investments. That was seen at the fair in the stronger showing from companies involved in property for the hotel, retail, logistics and health sectors.

This is seen as a positive development, also by Nima Davoodzadeh, Vice President of Development Europe, Wyndham Hotel Group, UK: “Over the last few years EXPO REAL has become one of the most significant platforms for hospitality and hotel development in Europe. As the place to meet high-profile people that can make decisions and move projects forward, EXPO REAL has a firm place in our event calendar.”

Carlos Vidal, Vice President International Operations Europe, Dunkin’ Donuts, Germany, and a representative of the retail segment, commented: “Not only were we able to successfully present ourselves to the German real estate market, we also welcomed many international visitors to our booth. Moreover, what really convinced us is the quality of the contacts we have met – EXPO REAL served as platform to get in touch with the big players of the industry.”

Summing up this year’s show, Axel Vespermann, Managing Director of UBS Real Estate KAG, Germany, said: “We are very taken with both the quantity and quality of the trade. EXPO REAL affords the opportunity to make valuable contacts and showcase our product range to an international target audience. We will certainly be back in 2015.”

The top ten countries of origin for visitors were, after Germany (and in this order): UK, Netherlands, Austria, Switzerland, France, Poland, Czech Republic, US, Russian Federation and Luxembourg.