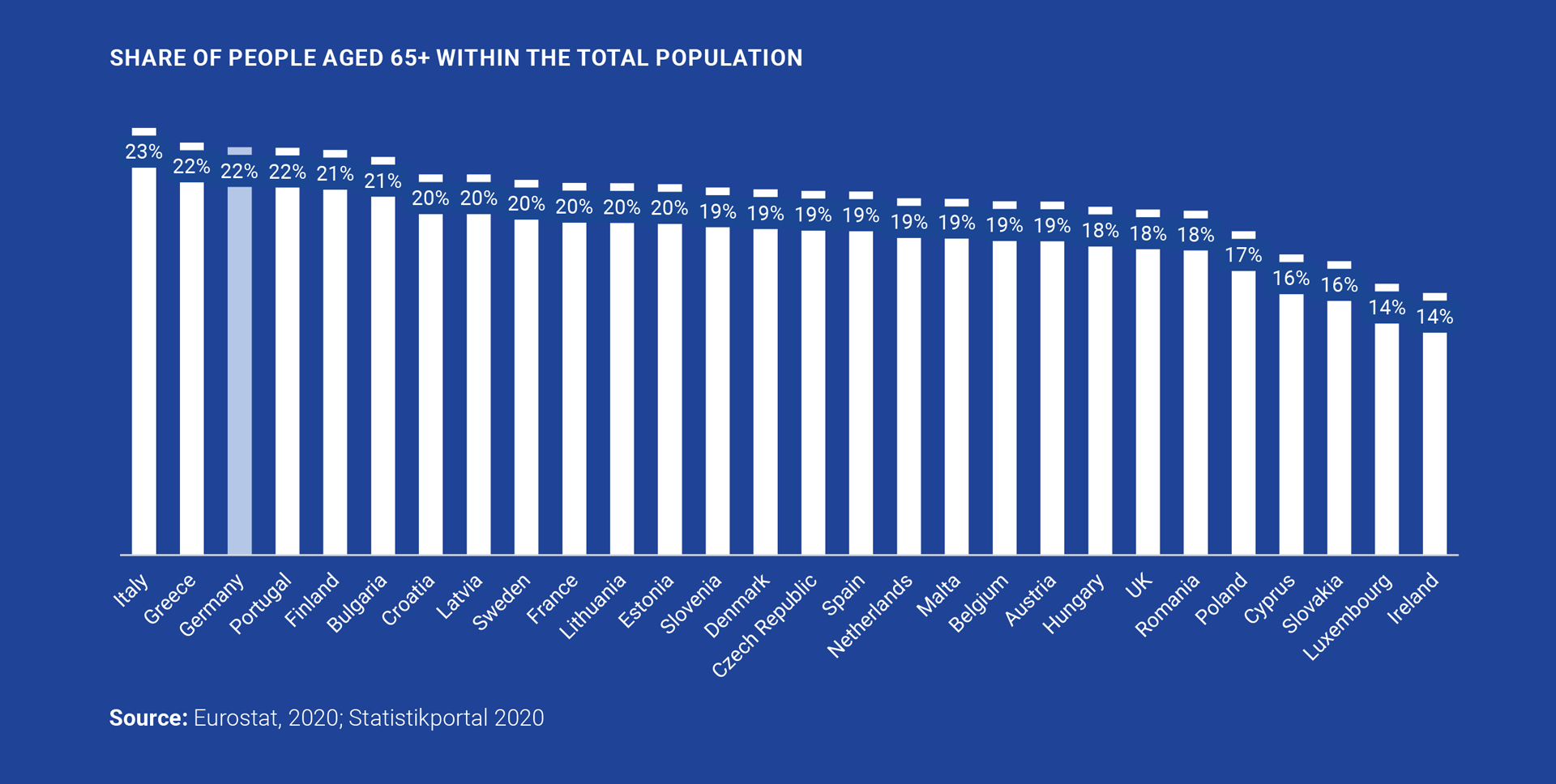 This is the second report of the series addressing the need for having comprehensive, standardised and robust data on the fast-growing senior living asset class, thus giving the market a new level of transparency and allowing for better investment environment. The aim of the report is to provide a demand-supply analysis and up-to-date insight into senior living in Germany, at the national level with a closer look into the top 20 locations across Germany.

“MoZaïC Asset Management is proud to present, with BONARD, the study “Senior Living Market Report” in Germany, which ranks third in Europe after Italy and Greece in terms of people aged 65+ within the total population. Thanks to high living standards and high-quality healthcare, the share of the population aged 60+ is growing quickly and accounts for 28 percent of the population. MoZaïC AM has initiated its second report into the senior living market and first devoted to Germany as an urge to understand a reality which was already a major societal issue, and which, in the crisis of the current pandemic, has been made all the more relevant,” says Frédéric Dib, CEO, MoZaïC AM.

The report concentrates on the 75+ age segment and analyses senior living establishments in Germany with a focus on private commercial service residences. At the same time, the research provides key information on public stock, as well as an overview of establishments for
dependent people.

The research has identified 1,368 assisted living establishments in the top 20 cities, with a total capacity of over 64,859 apartments. With the population aged 75+ in the cities cumulatively accounting for 1.65 million (representing 17 percent of all German seniors), there is a clear lack of supply to meet the growing demand for assisted living residences.

“We are delighted to introduce the second study from a series of senior living country reports, produced in partnership with MoZaïC AM. Despite the sizeable pool of potential customers of care service and independent living establishments, the supply remains limited. The provision rate for assisted living establishments in the biggest German cities is below 10 percent, creating a promising opportunity for the emergence of new developments,” says Julia Momotiuk, Senior Research Manager, BONARD.

The care market (assisting and supervising seniors in special establishments) in Germany was worth almost €58 billion in 2018, of which 36 percent was dedicated to residential service.

The prime net yield of assisted living establishments in Germany is almost the highest of all real estate assets, achieving 4.5 percent as of 2019.

Assisted living residences are mainly operated by non-profit organisations (e.g. charities), which comprise 65 percent of this supply. An additional 30 percent are managed by private providers, while the remaining 5 percent are run by public institutions.

The mapping of the provision rate (beds to seniors ratio) across the biggest cities in Germany sheds light on particular opportunities for new residences to be established. The highest rates were found in Bonn (7.7 percent), Nuremberg (6.9 percent) and Stuttgart (6.8 percent), while the average rate stood at 3.9 percent. Meanwhile, the provision rate of private commercial assisted living specifically fluctuates at around 1 percent and in no case exceeds 3.2 percent.

The residences in cities in western Germany are the most expensive. The average monthly rent for a 1-bedroom apartment in Köln stood at €2,346. The prices for apartments differ rather significantly even within the same city according to the class of the residence and
range of services; hence, such a gap in rent can reach €1,500 per month.

Despite the boom in assisted living construction, planned new assisted living capacities will not satisfy the growing demand generated by an ageing population. By 2025, the provision rate will decline in almost all the top 20 cities (except Duisburg), which creates opportunities for providers to enter the market with a high-quality service.