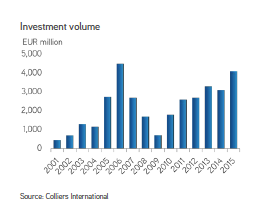 Colliers International summarises the performance of all sectors in 2015. Last year was a stable and moderate period for the Polish economy. The GDP growth rate in 2015 was 3.5 percent, in line with forecasts. It was also a good year for the commercial real estate market. The total value of investment transactions amounted to €4.1 billion and was the highest volume since 2006. The office and industrial markets witnessed record amount of leased space whereas the retail market gained large amount of new space, near to the record broken in 2013.

Demand was equally strong across all asset classes in additional to an impressive appetite for corporate deals. Pricing for core assets, particularly in the office and logistics asset classes, continues to be primarily driven by the residual lease term. However, we note that the liquidity for core+ and value-add properties is now also growing.

Poland remains the leading market in the CEE region, which was further characterised in 2015 by ever-growing liquidity and upward pressure on pricing.

Land market
There was a high demand for land sites last year. Low interest rates and a continuation of the government financial support program called “Mieszkanie dla Młodych – MdM” (apartments for youth) had a major impact on the purchase of new plots. The volume of transactions reached its highest value since 2006 and stood at more than PLN 2.0 billion.

Warsaw accounted for about 70 percent of the land purchased. Taking into account the division of sectors, the residential market was dominant (70 percent of funds). The share of plots for industrial development amounted to 20 percent, while the office and retail sectors stood at 10 percent.

The upward trend in the land investment market in Poland will continue. It can be assumed that in 2016 the transaction volume will reach another record value.

Office market
At the end of 2015, the total amount of office space in the nine major Polish markets reached 7.5 million sqm. During the year, developers completed over 587,400 sqm of office space, slightly less than in 2014. Almost half of the new supply was delivered in Warsaw (277,600 sqm), while in the regional cities most of the new supply was delivered in Wrocław (78,000 sqm) and Tricity (67,000 sqm).

2015 was a record year in terms of the amount of leased space. Gross demand registered from the first to the fourth quarter exceeded the previous year by 35 percent and reached 1.38 million sqm. The vacancy rate in Poland recorded a slight decline to the level of 11.6 percent (as compared to 12.4 percent at the end of 2014). Base and effective rents were at a stable level. Rental rates for office space in Warsaw ranged from €12.5 to €23 sqm per month, while in major regional markets they ranged from €10 to €16.5 sqm per month.

Currently, 1.5 million sqm of modern office space is under construction, half of which is located in Warsaw. Downward pressure on base and effective rents will continue in markets with strong construction activity. The overall vacancy rate for major office markets will demonstrate an upward trend.

2015 witnessed record-breaking demand. The volume of transactions was higher by approximately 100,000 sqm than in 2014 and at the end of Q4 2015 reached the level of 2.62 million sqm. Additionally, 234,000 sqm were leased within short-term agreements, which are not included in the general statistics.

Despite the low vacancy rate, effective rental rates will remain at a stable level.

Extensions of existing schemes constituted 25 percent of new supply. Most projects which were opened in 2015 are medium-sized shopping centres smaller than 20,000 sqm GLA.

It is estimated that in 2016 a decrease in annual supply may be observed. Around, 400,000 sqm GLA will be delivered to the market. Vacancy rates will probably remain stable and will not exceed 5 percent across the eight major Polish retail markets. The stable position of structural vacancy will be observed in secondary projects.

Hotel market
The hospitality market in 2015 maintained its strong upward momentum. According to the Ministry of Sports and Tourism, during the first half of 2015, Poland welcomed 37.7 million foreign visitors, with the number of tourists reaching 7.781 million, a rise of 5 percent and 4.7 percent respectively on the same period in 2014.

The hotel supply continues its fast pace of growth. Occupancy is rising steadily with average room rates remaining stable. According to the STR Global’s report on the hotel pipeline, Poland has the fifth-largest hotel development pipeline in Europe, comprising branded hotels planned and under construction.
All indications point to the current hotel property cycle continuing at peak volumes. Colliers expect a further increase in tourist visits, foreign as well as domestic, with the latter accounting for 70 percent of all hotel guests.