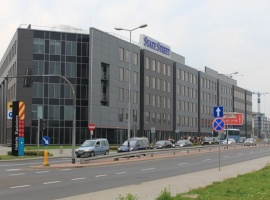 Globe Trade Centre S.A. (GTC) has announced the signing of a preliminary sale agreement for the sale of Kazimierz Office Center in Krakow, Poland. GTC signed the agreement with a subsidiary of a fund managed by GLL Real Estate Partners, for the sale of the office centre for around €42 million.

GTC’s decision to sell the asset is another step in the realization strategy that the company announced several months ago. In its usual course of business, GTC disposes of assets that have reached their performance maturity. The sale will generate about €13 million of free cash for the company, which will supplement the execution of GTC’s growth strategy.

“We have decided to sell this asset as, in our opinion, it has only limited potential for further value appreciation. The new owner has a different investment strategy and will benefit from the stable cash flow produced by the assets going forward. We consider this transaction as a proof of GTC’s office development capabilities,” said Thomas Kurzmann, GTC’s Chief Executive Officer.

Kazimierz Office Center offers 15,000 sqm of modern office space on five floors. The building was completed in 2009. It offers both underground and ground-level parking.