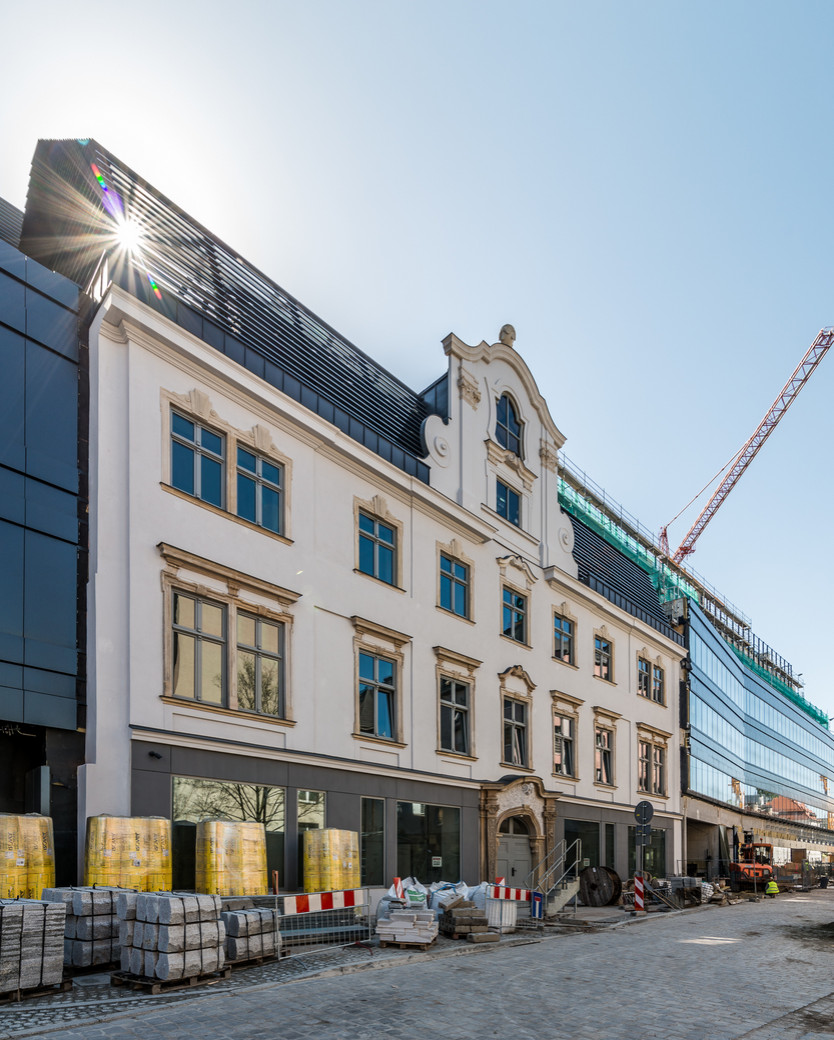 Skanska Property Poland has revitalized the historical Oppersdorff Palace and incorporated it into its Dominikański office complex. Furthermore, both the Palace and building A of the scheme have obtained occupancy permits.

Dominikański is a modern, Class A office scheme located in the very heart of Wrocław. It comprises two office buildings and the historical Oppersdorff Palace. In total, the whole scheme will provide nearly 40,000 sqm of space. The Palace will account for 800 sq m of the scheme’s overall space. An occupancy permit for both the scheme’s building A and the Palace was recently granted. Building B is currently under construction with its completion scheduled for August 2015.

“Dominikański was designed with a view to blending the scheme in with the surrounding area as well as presenting the revitalized Palace in all its glory. Because of the Palace’s inclusion, the Dominikański project has proved to be a unique scheme on the Polish office building market,” said Mariusz Krzak, Regional Director at Skanska Property Poland.

Oppersdorff Palace was built in the first half of the 18th century. It has changed its function and appearance several times over its nearly 200 years. Nevertheless, the Second World War and the post-war period took their toll on the building. Its façade and sandstone decorations were neglected over many years, even after the war when it became the headquarters for the Printer’s House. Only after Skanska included it into the Dominikański complex could the Palace be restored to its former glory.

The design for the Palace’s conversion was prepared in cooperation with building restorers, archeologists and city officials. An architectural inventory of the whole building helped to replicate its primary form with special attention paid to its intrinsic elements.

“During the restoration works we replicated the frontal elevation along with its relief decoration and two storey jerkinhead. Only after consultations and analyses conducted in cooperation with the Municipal Commissioner for Historical Monuments, were the building’s sandstone elements restored. In the Palace’s interiors we were able to restore many decorative elements in order to both symbolize the past and be part of the present in a new, modern office space,” commented Anna Życińska-Wójcik, Dominikański Project Manager at Skanska Property Poland.

Apart from its elevation, the Palace’s interior was also in need of revitalization. The building’s lobby and common space have been restored to their impressive grandeur. With regards space designed for tenants, numerous technical works were conducted, such as setting out new installations and introducing modern office systems. The final arrangement of interiors for future tenants will be implemented in consultation with the Municipal Commissioner for Historical Monuments.

The Dominikański complex – both its newly developed parts and the Palace – are a new addition to Wrocław’s business centre. Modern office space, a spacious patio, numerous services points and friendly urban architecture will result in the scheme being a very attractive location not only for its employees, but for all of Wrocław’s residents as well. It attractiveness is illustrated by the fact that it is already 55 percent leased.