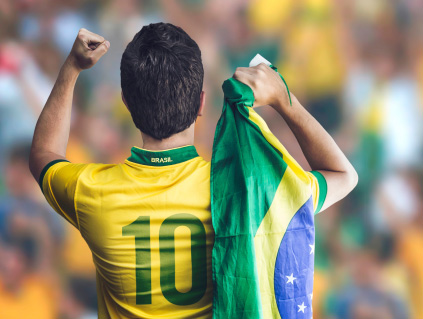 According to a report out this week from Colliers International, there is ample evidence to suggest that hosting a World Cup increases the chances of winning substantially. Colliers’ report, FIFA World Cup 2014: Brazilian Goals reveals that of those countries that hosted the World Cup since 1970, some 32 per cent went on to win the competition outright; 42 percent finished in the top two positions; 47 percent finished in the top three and a whopping 63 percent were in the top four.

Roger Hobkinson, Director, Destination Consulting at Colliers International explained: “The chance to host is often a doorway to a country’s first (and sometimes only) real success. For instance, England in 1966 had never progressed past the quarterfinals, much less appeared in a final. South Korea had never made it out of the group stage prior to a fourth-place finish in 2002; 2002 was Japan’s second-ever World Cup, and they passed through as well. The USA also passed through for the first time in 1994 (although beaten by eventual winners Brazil in the first elimination round). Chile’s third-place finish as hosts in 1962 is the single bright spot on an otherwise unremarkable record; and Mexico’s two quarter-final appearances were achieved as hosts (1970, 1986).”

He continued: “Brazil, as a team and a country, has much to gain.”

In an attempt to analyse the impacts of the goals and learn from the legacy of previous World Cups, Colliers International’s research teams from around the world have undertaken a global consultation to identify likely impacts of the World Cup on the economies and real estate markets of host countries. This paper draws on experiences dating back to the Mexican World Cup in 1970.

The study reveals that most of the benefits of hosting the World Cup are indirect and long term; therefore difficult to directly quantify. The findings suggest that measuring the success or failure largely depends on the host nation’s motivations for holding the event, which are not necessarily limited to financial gains.

“We must consider the motivations of a country (and its cities) for hosting so that a balanced review of the net benefits can be made,” continued Roger Hobkinson.

The net gains to be made by Brazil from hosting the World Cup will be substantial, but they are unlikely to be realised during the event. The Report’s top five findings that Brazil can expect to benefit from are:

Winning: The key immediate advantage to hosting a World Cup is that it increases the chances of the host country team winning the event outright.

Feel-good factor: The feel-good factor associated with the World Cup is hard to measure and individual to each host country, but it is widely acknowledged that hosting the event has a positive impact on patriotism and national unity.

Profile/brand: Most benefits of hosting the World Cup are not financial, but rather linked to a nation’s ‘branding’ in the international community. Playing host will immediately raise the global profile of a country and might even change perceptions of the host nation, resulting in increased tourism and political benefits and alliances, but these accrue over many years.

Infrastructure: Regardless of success – financial or sporting – a legacy of infrastructure remains, accompanied by improved roads, transport connections and telecommunications that might have not otherwise have been realised.

Costs: Reliable figures that encapsulate the total financial benefits that the event contributes to the host’s economy do not exist; the cost per attendee is around $1,300, however, this doesn’t take into account the positive revenues generated by broadcast deals, corporate advertising and merchandising. For many, hosting the event is considered to be priceless.

Walter Boettcher, Colliers International’s Chief Economist, EMEA said: “If you wish to promote a country and its main cities, as a large corporate might raise its own brand awareness, hosting a World Cup or any other mega-event, will deliver success. In contrast, if you wish to make a commercial profit, or if you want to increase popular support in your country, ample evidence suggests there are far easier ways to achieve these very different goals.”