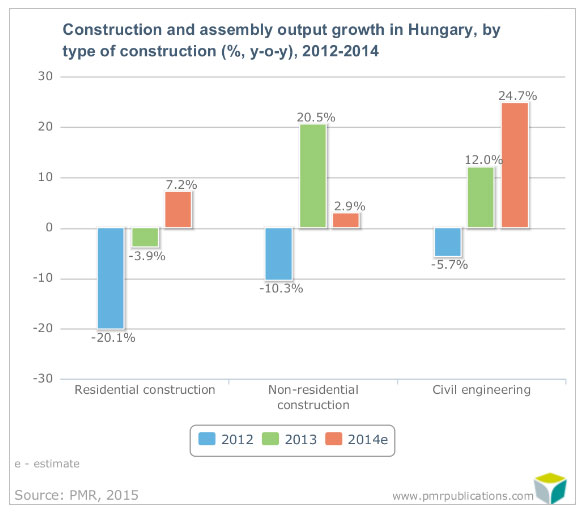 In non-residential construction, following an estimated rise of less than 3 percent in 2014, Hungarian non-residential construction is expected to experience nearly 5 percent increase in 2015, as a number of projects, particularly on the warehouse and office markets, are expected to begin. On the other hand, the non-residential subgroup which is likely to lag behind all others is retail facility construction. The renewal of the ban on the construction of large shopping malls last December dashed hopes of recovery among investors in this area. As a result, no major retail facility projects were unveiled in 2014, a year which saw no facilities completed in this field. Most of the output in the retail construction arena is accounted for by small developments in small towns.

Road construction is forecast to be the main generator of funding and orders for the Hungarian construction industry in the years to come. The EU budget for the years 2014-2020, which is relatively favourable for Hungary, along with the expected high rate of absorption, will stimulate public investment and employment in the economy. As a result, the amount invested in civil engineering structures will still be relatively substantial in the medium term.

However, in 2016, it is expected that expenditures covered by EU funds will be reduced significantly because of the end of the financing period for projects under the 2007-2013 EU budget. This will have a detrimental effect on public investment and, consequently, civil engineering construction.
We have already seen some signs of possible slowdown. In the first three months of 2015 the construction confidence indicator began to deteriorate again, mostly driven by slow-growing prices and still massive competition for a low number of orders.