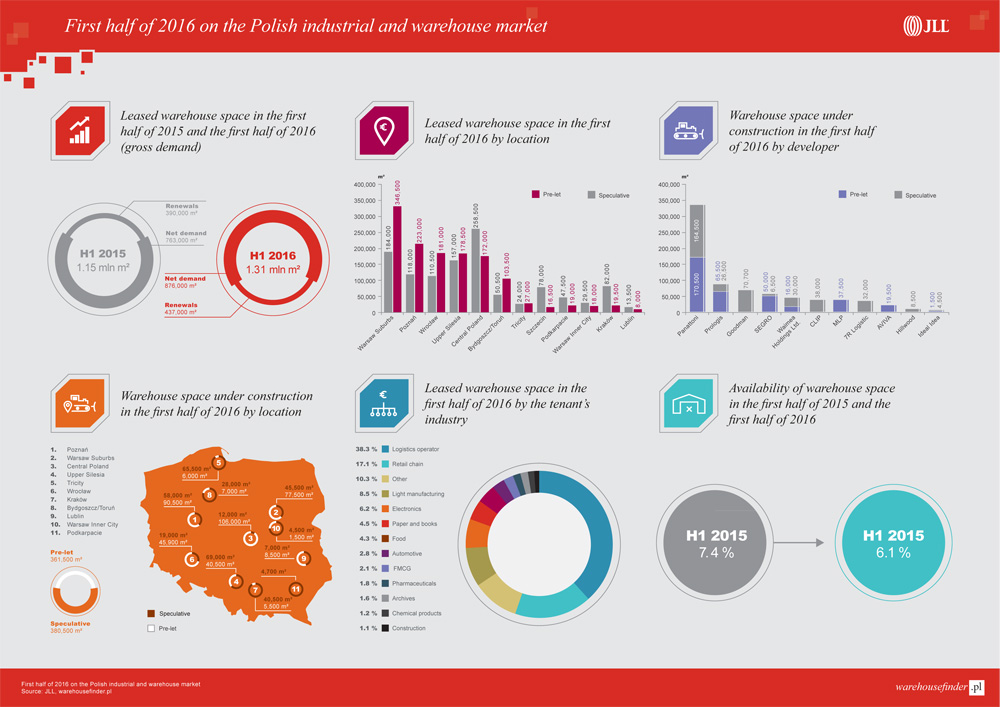 Industrial market in Poland looks to set another record – EuropaProperty

1,312,000 sqm of warehouse space was leased in H1 2016. This is the best half-yearly result in the market’s history. 742,000 sqm remains under construction, of which 51 percent is being developed on a speculative basis. The vacancy rate reached a historically low level – only 6.1 percent of existing warehouse supply is available for lease, according to JLL summarizing H1 2016 on the industrial market in Poland.

Tomasz Olszewski, Head of Industrial CEE at JLL, commented: “The industrial market in Poland is maintaining its excellent momentum. In H1 2016, companies signed lease agreements for 1,312,000 sqm of space, the best result in the market’s history. Moreover, developers remain bullish about the market’s further development – 742,000 sqm of space remains under construction with 51 percent being carried out on a speculative basis. Furthermore, high demand has resulted in the market’s lowest ever vacancy rate – only 6.1 percent of existing warehouse stock remain without tenants.”

Importantly, net take-up accounted for up to 876,000 sqm which is the best six -month period in the history of Poland’s industrial market and sets up 2016 as a possible record breaking year.

The emerging regional markets are gradually gaining in importance. Although in H1 2016 their total net take-up was slightly lower than in H1 2015, they have recently registered large lease transactions, e.g. Carrefour or Kaufland in Bydgoszcz.

“Logistics operators and retailers are the most active tenants on Poland’s warehouse market. In H1 2016, those two groups took 728,000 sqm of space with 525,000 sqm attributable to new leases and expansions. The share for logistic operators and retailers in net take-up was 37 percent and 22 percent respectively. Overall, since 2005 the two sectors have been responsible for 54 percent of total net take-up,” said Przemysław Ciupek, Senior Research Analyst at JLL.

By the end of H1 2016, the vacancy rate hit a historically low level of 6.1 percent, meaning 649,000 sqm of modern industrial space remains without tenants. Among the nine markets, the highest vacancy rate was registered in Warsaw Inner City (10.4 percent of warehouses are available) and the Warsaw Suburbs (10.1 percent), while the lowest was in Kraków (1.3 percent). Szczecin features 0 percent vacancy.

By the end of H1 2016, 742,000 sqm of warehouse space remained under construction, with 51 percent being carried-out on a speculative basis.

Panattoni accounts for the highest amount of space under construction – nearly 335,000 sqm.

“Total industrial stock by the end of H1 2016 in Poland was 10.58 million sqm. Taking into consideration the high developer activity, the market has the opportunity to exceed 11 million sqm of supply by the end of 2016,” added Tomasz Olszewski.

Rents for industrial facilities depend on a number of factors which vary according to the particular region or even sub-region. These factors include the quality of a given scheme, and the availability of space. The highest rents are typically a feature of Poland’s three urban markets: Warsaw Inner City, Łódź and Wrocław. The most characteristic industrial format in these locations are SBU’s (Small Business Units). According to warehousefinder.pl, effective rents in these locations were €4.8 / sqm / month in Warsaw, €3.8 / sqm / month in Wrocław and €3.7 / sqm / month in Łódź.

New regulations regarding land acquisition came into force in May 2016, resulting in the extension of the administration process related to warehouse development in Poland. Stricter conditions regarding the change of land use from farmland to developable land may limit the number of potential development projects in the near future.

“In H1 2016, developer interest was predominantly focused on new development sites in Central Poland (the eastern part of Łódź) and the Warsaw Suburbs (the southwestern areas). These areas became more attractive, particularly after the completion of the A2 and A1 motorways, as well the S8 express-way,” said Agata Zając, Associate Director, Industrial, JLL.

No major changes in land prices were seen during H1 2016.