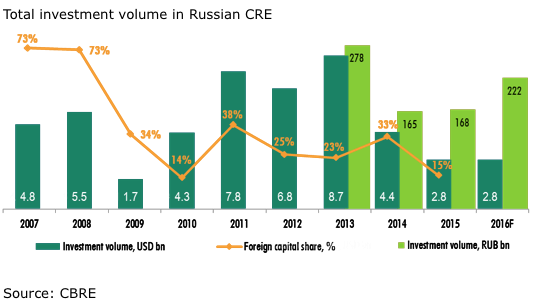 According to the latest investment report by CBRE, despite the economic turmoil, interest in commercial real estate is still high, both from Russian and foreign investors. The main driver for investors now is the potential of asset value recovery on the back of a market correction.

Investment into real estate assets was down by 36 percent y-o-y in US dollar terms and amounted to USD2.8 billion. However, the investment volume in rouble terms was the same as in 2014 and amounted to RUB168 billion.

The re-pricing is happening because of FX market volatility, structural change of leasing income, and high cost of debt.

Investors have several strategies now, the purchase of quality income producing assets or assets with leasing income upside. At the same time, investors are particularly interested in assets with high debt burden, if there are prospect for debt optimization or owner’s strategic decision to sell at the current level.

The investment market in 2015 was as liquid as in 2014, with the same number of deals, because of rouble devaluation the average investment deal size declined to USD55 million from USD85 million.

Foreign investment share declined to 15 percent in 2015 from 33 percent in 2014. Regional investments amount to a mere USD58.7 million, or about 2 percent of the total 2015 volume, reflecting the investor interest in Moscow.

Investor demand for shopping centres and warehouses in 2015 took 25 percent and 18 percent of the total volume accordingly. Among the largest deals in these segments were the purchase of Fashion Season Gallery and PNK Chekhov I logistic complex.

11 percent of the total volume was invested into hotels. The key contributors to this were the sale of the Four Seasons Hotel Moscow and the Sheraton Palace hotel.

Despite the uncertainty on the market, investors see the benefits of investing at market bottom and advantage over other asset types in the form of value retention in the long term. As the current oil price level is prohibitive for its producers, we expect the situation to change and stabilization on real estate investment market to start during H1 2016.

Olesya Dzuba, Director, Strategic Analysis and Planning Department CBRE in Russia, commented: “High investor interest to commercial real estate is demonstrated by the deal volume in the negotiation stage. Notably, the interest is presented not only by Russian capital, that has been dominating on the investment market recently, but also by the interest of foreign investors, including Asian and Middle Eastern, which has not been realized yet. Taking into account the amount of deals that have been postponed from 2015 to 2016 and high investor interest, we forecast 30 percent real estate investment growth in rouble terms in 2016, with the investment volume in dollar terms remaining at the 2015 level.”