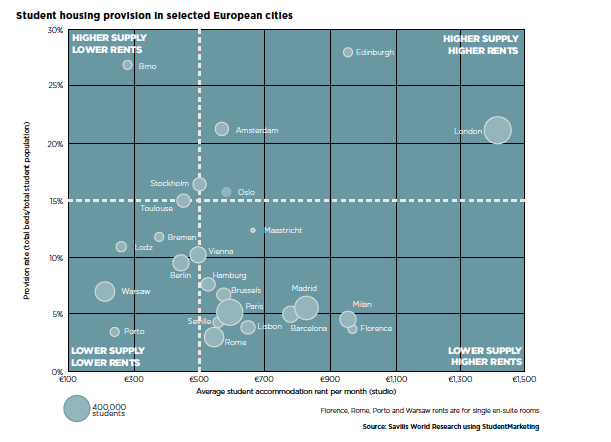 Investment in residential alternatives of all types is rising, with big-ticket global residential – EuropaProperty

Global student housing investment volumes have risen 87% in the last five years, says Savills. The maturity of the UK and US markets, coupled with low provision yet high demand for purpose-built student accommodation (PBSA), mean that southern European cities offer the strongest opportunities for new investment in the sector over the coming year. But global need for multi-family, co-living and retirement housing offers opportunities across all jurisdictions, and are particularly under-invested asset classes in the UK, says Savills.

In its Global Living report the international real estate advisor says that the provision of PBSA is highest in the UK where 27% of all students can be accommodated, and lowest in southern Europe. In Italy, Europe’s fourth-largest student market, the national provision rate is less than 5%.

Analysing city-by-city data from StudentMarketing – an independent provider of student housing and micro living research and data – Savills has identified that provision is lowest in Rome, with a student population of 220,500, but only 6,500 student beds (a provision rate of 3%), followed by Porto (3.5%), Florence (3.8%), Barcelona (4.9%) and Madrid (5.7%). These cities therefore offer the best immediate opportunities for investors, says Savills, as many have strong international student populations – indicating a solid supply base – and high average PBSA rents.

Kamil Kowa, Member of the Board and Head of Corporate Finance & Valuation at Savills in Poland, says: “The number of international students in Poland has surged five-fold over the last decade to 73,000 in the current academic year. Poland offers the sixth largest student population in Europe, strong economic fundamentals and more attractive yields than in Western Europe. This all makes our country one of the future investment hotspots for many investors who have already established presence in Western Europe and look for opportunities to grow in a stable environment.”

In the 2017/2018 academic year there were nearly 1.3 million students in Poland, where just 130,000 or 10% of all students could be accommodated in 490 state-owned and private halls of residence. This market’s potential has been recognised by such operators as Student Depot, Basecamp, Golub GetHouse (Livinn) and Zeitgeist Asset Management. Some projects that are currently in the pipeline will offer high-quality accommodation. Savills estimates that the Polish PBSA segment offers beds for approximately 4,000 students.

“Apart from Purpose Built Student Accommodation (PBSA) we expect growing popularity of another derivative of the residential market such as institutionally rented residential (PRS). Getting close to the top of the current cycle many fund managers are looking to increase allocation to such counter-cyclical assets,” adds Kamil Kowa.

Some of the first projects in the Polish institutionally rented residential sector include assets under management of the Catella fund comprising part of the Złota 44 building in Warsaw, Pereca 11 and a complex of three buildings underway in Rakowiecka Street in Krakow. Other large-scale projects include Browary Warszawskie, managed by Resi4Rent of the Griffin RE Group, and the Liberty Tower of Golub GetHouse. Senior housing is also likely to grow going forward. Poland already has more than 6.5 million people aged over 65.

Samuel Vetrak, CEO of StudentMarketing adds: “In terms of overall trends, student housing in Europe is widely considered as an established asset class with enough liquidity. There is a growing number of investors, including foreign and institutional ones, that see investing in student housing as an ideal way to diversify their portfolio and get higher yield rates than in traditional asset classes. In addition, investors appreciate the fact that student housing is considered as a recession-resilient asset class as the number of international students has grown constantly, even during the crisis a decade ago.”

Savills also highlights the movement by some student housing operators into the multifamily and co-living sectors and the opportunities this opens up for investors looking to spread risk across several different asset-types. Multifamily investment across eight major European markets exceeded €27bn last year, still a fraction of US volumes, but up 19% since 2013, according to Savills. Sweden, The Netherlands, Denmark and Germany have established institutional residential markets, offering the most liquid market conditions for trading.

Marcus Roberts, Director of Residential Capital Markets, Europe, at Savills: “As management quality has improved and operators have strengthened their brands, and with many markets under-supplied of professionally-managed private rental stock, providers such as The Fizz and Milestone are delivering a new product to satisfy demand. In the UK, multifamily is still a young sector with total investment volumes at £2.6 billion in 2017 – just 18% of Germany’s volumes but up 20% on 2016. Last year 70% of deals were forward funding and forward purchase deals. The focus on the development of new stock is likely to fuel future transaction activity.”