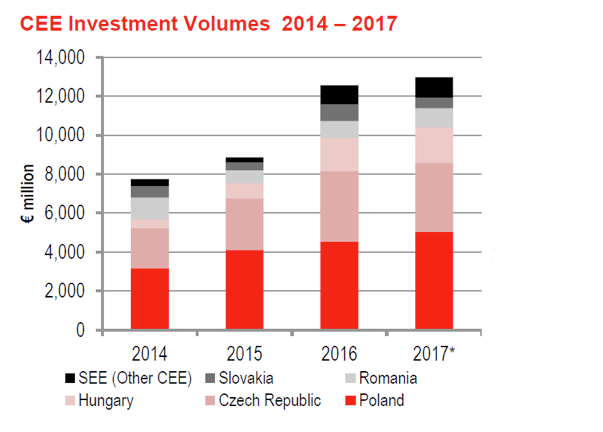 At around €12.98 billion, 2017 recorded a 3.3 percent increase over 2016 (€12.56 billion) and, for the second year running, set a new record of transaction volume for the CEE region. According to JLL, which has registered continued appetite from investors for the full range of assets across the entire region.

The full year breakdown saw Poland and the Czech Republic each record new second best ever volumes with a regional share of 39 percent and 27 percent respectively. These were followed by Hungary (14 percent), Romania (8 percent) SEE markets (8 percent) and Slovakia (4 percent).

With a solid pipeline of transactions set for 2018, we expect another strong year. Our forecast for the full year suggests CEE regional volumes will reach in excess of ca. €12.0 billion, which could again challenge the new record set in 2017. For 2018, the report also predicts the possible breaking of the record volume in Poland of €5.05 billion (from 2006), partially due to the shift of some major transactions from the end of 2017.

“For the second year running I have seen CEE achieving record investment volumes – plus further increasing its percentage of overall European volumes. I also sense that investor demand will continue to increase through 2018 as new capital tries to enter the CEE market, encouraged by the positive yield differential to Western European markets, but also supported by the strong occupational markets in the capital cities,” said Mike Atwell, JLL Head of Capital Markets CEE and the Czech Republic.

2017 was again another strong year for Czech Republic’s investment market. Investment volumes remained robust with a total investment volume of €3.54 billion in 2017 compared to €3.62 billion in 2016. Despite reflecting a marginal decrease in volume, this was primarily due to the shortage of available product and not the lack of investor appetite, both domestically and internationally. On a Global and European scale, we have continued to see increasing allocations into real estate with a heavy weight of capital that is seeking solid and secure income returns. With Western European markets showing their lowest yields on record, investors are keen to seek out markets which offer an attractive yield profile yet still benefitting from security and stability – thus Central Europe has continued to prove itself as a popular destination for capital, particularly the Czech Republic.

“During the latter part of 2017 I could sense that within CEE it is the Czech Republic that has gained ground and is undoubtedly now one of the top destinations in the region – across the retail, office and industrial sectors,” commented Mike Atwell.

The largest sector was retail – its volumes made up 45 percent of total volumes. The retail sector has proved resilient with several high profile transactions such as the purchases of Olympia Brno by Deutsche Euroshop, Letnany Shopping Center by CBRE Global Investors and the 50 percent purchase of Metropole Zlicin by Unibail Rodamco.

The offices sector has continued to demonstrate strong performance with 29 transactions making up 29 percent of the total investment volume. The status of Prague’s positive occupational market with low vacancy rates and strong take-up has made the capital city a key destination. Notable transactions include the acquisitions of Zlaty Andel by CPI, Skoduv Palac by GLL and Blox by CFH Investment Bank.

In the industrial and logistics sector we have recorded transactions worth €366 million in 2017 which makes up 10 percent of the total investment volumes. This smaller share is mainly due to the fact that the largest industrial portfolios were transacted in recent years. Key transactions of note are the Stage Capital portfolio acquisition by CBRE Global Investors, Logistics Centre Lovosice by P3/GIC and the Logicor Prague Airport transacted as a part of wider European portfolio by CIC.

We have also seen Czech capital expanding across borders with CPI investing into Germany and REICO investing into Poland. We expect to see this trend continue through into 2018.

Traditionally, Poland is the leading market by volume

The Polish Investment market, which saw €4.54 billion traded in 2016, continued to perform strongly in 2017, with €5.03 billion traded. This volume was comparable to the best result for country investment volumes from 2006, equal to €5.05 billion. The sector split for 2017 comprised ca. €2.07 billion in retail, ca. €1.58 billion in offices, ca. €940 million in warehousing, ca. €342 million in the hotel sector with the remaining falling to mixed use and residential.

The volume of transactions on the Hungarian commercial property market reached a level €1.84 billion, a 7 percent increase over 2016, but just short of the record volume set in 2007 (€1.97 billion). The outstanding weight of capital clearly signals the returned and strengthened confidence of investors towards the Hungarian market and the increased liquidity in every asset class. The office asset class remained the back bone of the investment market in H2 2017 with a 43 percent share of the overall volumes, followed by retail assets with 35 percent, industrial with 13 percent, hotels with 7 percent and properties for redevelopment purposes for the remaining 2 percent.

The 2017 property investment volume for Romania is estimated at almost €1 billion, a value ca. 10 percent higher than the one registered in 2016 (€890 million). The number of transactions increased, with the average deal size standing at approximately €28.5 million. Bucharest accounted for approximately 36 percent of the total investment volume, less than in 2016, showing that liquidity in secondary cities has improved. Market volumes were dominated by retail transactions (43 percent), while industrial, office and hotels accounted for over 22 percent, 17 percent and 18 percent respectively.

The total investment volume in Slovakia for 2017 was recorded at just under €525 million, with more than two thirds being closed in the second half of the year. The volume is below our €600 million estimation as several deals did not close before the year end and will slip into 2018. From an occupational perspective, Slovakia is enjoying a positive evolution of market conditions in both, industrial as well as office markets with low vacancy levels and healthy development pipeline, resulting in stable to increasing headline rents and reasonable incentives. The overall attractiveness of the investment market is boosted by increased demand from local as well as international investors, looking at wide range of risk levels. For 2018, we expect the total investment volume to reach a level of the €650 million.

As investment momentum continues across the CEE, the SEE sub-region has also been part of this regional trend. In the second half of 2017, the focus of investors has been in Bulgaria, Sofia more specifically, driven by two large shopping center transactions. Both transactions included South African investors, which means international investors continue with appetite for investments in these regions. Significant transactions in various sectors, involving foreign investors, also took place in Belgrade, Serbia, or in Slovenia, Ljubljana. The will to invest in the SEE remains strong, and therefore we expect that further transactions will take place in 2018 and market development will also be boosted.

“As ever the question is always how long can this market continue, we are now coming close to 10 years since the last decline – in my view, with the benefit of continuing low interest, a strong yield gap between real estate yields and government bonds, a sustainable and strong occupational market and strong macro-economics, I feel we have a little further to go on this market – we should all enjoy it, as these market conditions cannot continue unabated!” added Mike Atwell from JLL.