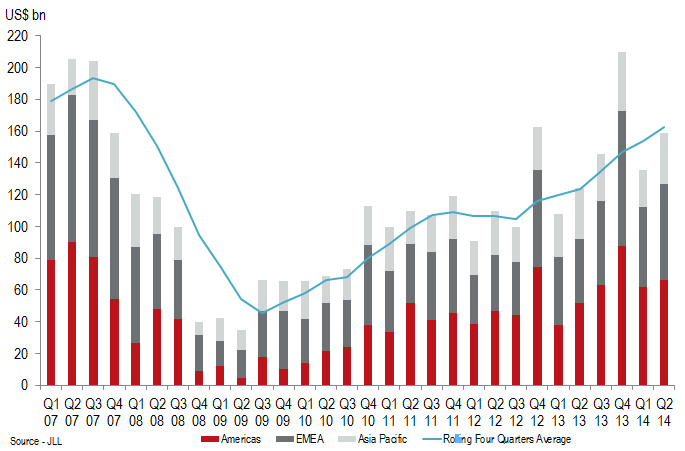 In H1 2014, an investment volume of around €2.87 billion has been recorded in CEE. Poland continues to be the most active market in Central and Eastern Europe accounting for 50 percent of total investment volume registered in the region in the past six months.

Total volume of investment transactions in Poland amounted to €1.43 billion in H1 and is forecast to hit €4 billion by the end of the year.

JLL presents its investment market summary of H1 2014 on the commercial real estate market in Central and Eastern Europe (CEE).

The eighth edition of JLL’s Global Real Estate Transparency Index, covering 102 markets worldwide, shows that the Central and Eastern European sub-region has seen the greatest shifts in transparency across Europe. Among the EU’s 28 members, the highest GDP growth in Q1 2014 was recorded in Hungary and Poland (both +1.1 percent).

Although individual CEE economies continue to recover at different speeds and from different base levels, all markets in the region are forecast to register positive economic growth. This is reflected in the investment volumes across the region.

Troy Javaher, Head of Capital Markets CEE, JLL, said: “In H1 2014, an investment volume of approximately €2.87 billion has been recorded in CEE. This represents a circa 65 percent y-o-y increase in volumes compared to the same period of 2013 (€1.7 billion). Poland remained the leading market in CEE with a share of circa 50 percent, followed by the Czech Republic (25 percent), Romania (15 percent), Hungary (8 percent) and Slovakia (2 percent). The SEE markets – Bulgaria, Croatia, Serbia and Slovenia – are currently being monitored by investors but did not record any significant transactions in the first half of 2014.’’

Transaction volumes remain robust in many markets and has produced further prime yield compression in recent quarters. Inward movement is expected to continue this year, albeit at a modest rate with levels now close to their previous lows in many locations.

According to JLL, in Poland industrial volumes on the rise. The H1 2014’s result of €1.43 million, is the best since 2007 and is over 40 percent higher than the respective period in 2013. The twenty-eight transactions concluded in Poland in H1 2014 consisted of €752 million in office deals, €368 million in retail and €313 million in industrial transactions. In Q2 alone, the volume of investment transactions in Poland amounted to €491 million (30 percent increase y-o-y), with the industrial sector leading the way with €222 million, followed by the office segment (€197 million) and retail (€73 million). So far no mixed use or hotel properties have changed hands this year.

The key office transactions closed in the first six months of 2014 in Poland included: an acquisition of Rondo 1 by Deutsche Asset & Wealth Management (for ca. €300 million) from BlackRock, and Lipowy Office Park sale by CA Immo to WP Carey (for €108 million) in Q1. In Q2 exemplary transactions include Atrium 1 sold by Skanska to Deka (for ca. €94 million) and six office buildings from Arka BZ WBK Property Market Fund portfolio sold to Octava FIZAN.

Major retail transactions included: Poznań City Center bought by a consortium of Resolution and ECE Fund from TriGranit, Europa Capital and PKP in Q1 and the sale of Galeria Mazovia by Lewandpol to CBRE Global Investors in Q2 (both for undisclosed price).

Major transactions in the industrial sector included: Tristan/AEW selling industrial properties situated on the outskirts of Warsaw, Lodz and Poznan to SEGRO (ca. €100 million), and the sale of logistics assets in Mysłowice, Stryków and Robakowo from Standard Life Investments to Blackstone (€118.2 million).

Tomasz Puch, Head of Office and Industrial Investment, JLL Poland, commented: “We have observed an increased appetite for regional offices amongst investors, already proven with H1 transactions concluded in Krakow, Wroclaw, Poznań, Gdynia and Łódź. At the same time, we have witnessed new entrants to the office investment scene such as WP Carey and Octava S.A., who have successfully concluded large and complex transactions of national reach.”

The first half of 2014 also brought a number of opportunistic and value-added transactions of a scale greater than in the corresponding periods of previous years. Such types of transactions amounted to over €200 million, doubling the H1 2013 result in this respect. With deals in the pipeline, JLL expects this trend to continue throughout 2014.

JLL estimates prime office yields to remain stable at around 6.25 percent, with possible compression for unique assets. Retail yields for best in class products are at 5.50 percent and truly prime warehouse asset yields are expected at or below 7.25 percent.

“Going forward, we expect 2014 to be another very prosperous year with volumes already exceeding the strong figures seen in 2013. In our opinion, 2014 will be the strongest year since 2006 with volumes forecast to reach over €4 billion of transactions. We expect the highest-ever volumes of industrial investment to come in at over €700 million, office investment to hit close to €1.9 billion and retail investment to continue its strong performance with approximately €1.5 billion of deals,” Tomasz Puch added.