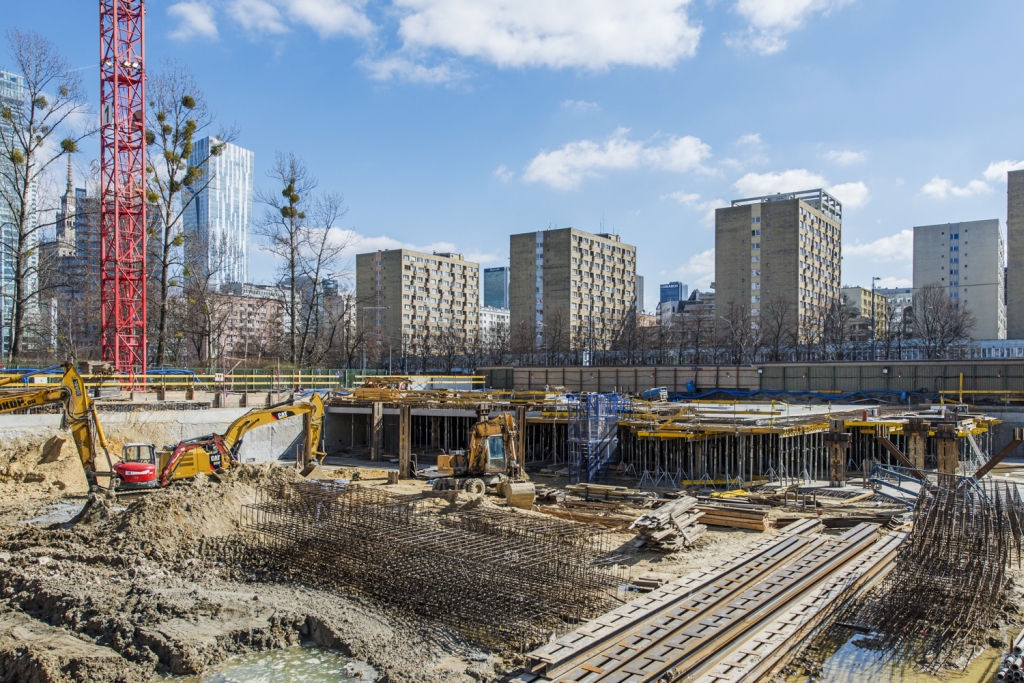 Intensive underground works are under way at Mennica Legacy Tower construction site. The skyscraper, which is under development, located at the intersection of Prosta and Żelazna Streets in Warsaw, will be the most technologically advanced office complex in Poland. A 140-meter tall tower with a neighbouring 43-meter tall Western building will offer a total of 65,630 sqm of modern lease space. The first building will be delivered in the fourth quarter of 2018.

The construction of Mennica Legacy Tower began in November 2016. The general contractor – Warbud – is already at the finish of the diaphragm walls and has already developed over one third of the barrets. Barrets are a special kind of pile, which is made from a single section of a diaphragm wall and additionally equipped with temporary steel posts. Their task will be to sustain the supporting slab at the level -1, of which pouring has just begun.

“Development of Mennica Legacy Tower is proceeding according to schedule, about 100 people are currently working on the site,” said Piotr Turchoński, Development Director at Golub GetHouse. “Currently, apart from finishing the last section of the diaphragm wall, we are making barrets and pouring the first areas of the supporting slabs. In the coming weeks we will be more and more focused on earth works and securing the excavation stiffening with the supporting slabs.”

Since the beginning of the works on the underground construction of Mennica Legacy Tower about 30,000 tons of concrete has been poured at the construction site and the foundations reinforcement took over 1,000 tons of steel. Exactly the same amount of concrete would be needed to develop an 80-metre tall pole with the basis of a full-size volleyball field or a 2-meter wide pavement leading from the centre of Warsaw to Lodz.

Mennica Legacy Tower project has been designed by the renowned Chicago-based architectural firm Goettsch Partners, which decided to work with a well-established design consultant Epstein. The entire investment will be completed in line with the demanding requirements of the BREAAM international certificate with at least ‘Excellent’ rating.

In addition to the elegant glass façade, the building will feature the highest quality interior finishes, including the reception lobby and common areas.