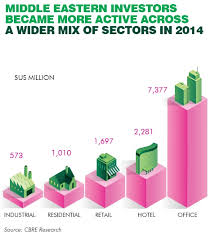 Middle Eastern buyers invested a total of $14.1 billion outside their home region in 2014, making the Middle East the third largest source of cross-regional capital globally, despite a fall in total spend, according to CBRE’s “Middle East In and Out 2015” report.

Europe remains the preferred market for Middle Eastern investors, receiving $10.2 billion in 2014. In line with other investor groups, the year saw a major shift in investment strategies, with activity growing across second-tier European locations, including Amsterdam, Frankfurt, Budapest and Madrid. While still the most popular market, London received 32 percent of spend in 2014 compared to 45 percent in 2013, with Paris and New York growing their shares in 2014 to 16 percent and 10 percent respectively. London and Paris were the only two markets to retain a top five ranking in 2014.

Iryna Pylypchuk, Director, Global Capital Markets Research, CBRE, commented: “There was a fall in outbound capital from the region from $16.1 billion invested globally in 2013 to $14.1 billion last year. In part, this is a function of difficulty in accessing product, and the large lot sizes these buyers tend to invest in. However, looking ahead and in light of weaker oil pricing, real estate acquisitions by sovereign wealth funds are expected to slow further in 2015 and beyond.”

Pylypchuk added, “In contrast to SWFs, lower oil prices may have triggered private capital to increase international allocations and speed up deployment faster than would have been the case otherwise. Our research clearly shows a greater allocation of investment to real estate and desire to diversify away from the home region. This has had a significant impact on Europe, where the combined investments of private wealth and equity funds from the Middle East grew by 49 percent year-on-year to $5.5 billion.”

While an overall drop in spend was recorded, Nick Maclean, Managing Director, CBRE Middle East, added: “Middle East investors’ overseas real estate spend has grown amongst private and family offices and Saudi investors, as geographical diversification has become more important. We feel that this trend will accelerate over the next few years.”

Valentin Gavrilov, Director of Research, СBRE in Russia, said: “Middle Eastern investor interest to Russia is quite limited. There was only one investment transaction, which occurred in 2014. In this deal the Qatar investment authority acquired residential complex “Pokrovsky Hills”, which is leased mainly to expats. One of American Goldman Sachs investment funds was the seller in that transaction. There has been no investment activity from Middle Eastern investors in Russia in 2015 so far. Key reasons for this situation include geopolitical problems and relatively high current investment risks. As a result, in 2015 we do not expect to see a noticeable activity of investors from this region on the Russian commercial real estate market.”