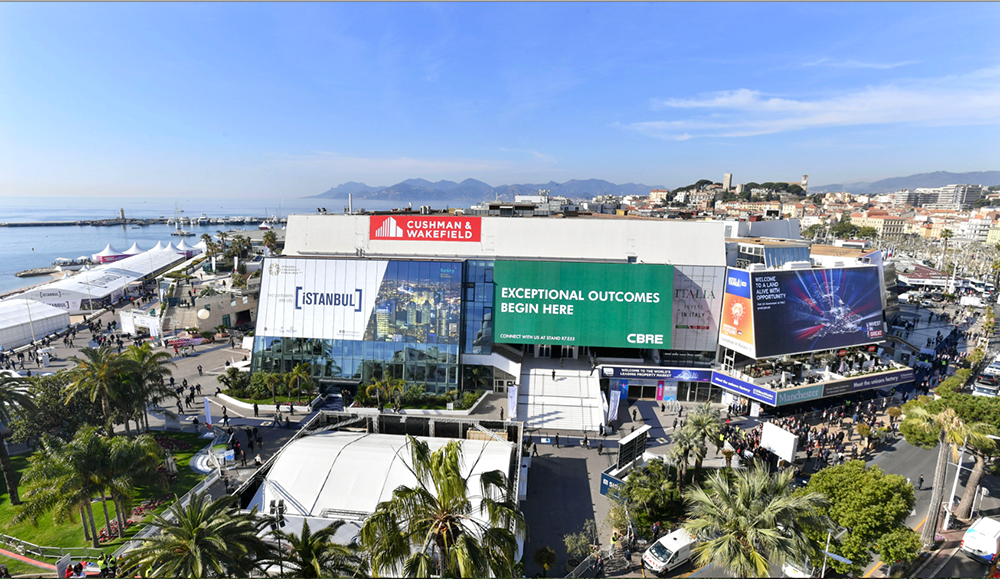 26,000 real estate, city and political leaders, including 5,400 investors, from over 100 countries came together at at MIPIM, the world’s leading international real estate business, conference and networking event.

Among the key talking points in Cannes were the growth in real estate investment expected this year, urban development, the move to target cities rather than countries in investment strategies and how tech is now being more fully embraced by real estate companies.

MIPIM delegates settled down for the week’s intensive business and networking against a background of relative industry optimism for the upcoming year. In its annual ‘Global Investment Atlas 2018,’ leading property agents Cushman & Wakefield noted that a strong global economy across all markets will encourage investors to release more funds into real estate this year compared to the record $1.6 trillion in 2017.

Cushman & Wakefield reported that Asian investors were particularly active, increasing their investment in Europe by 96 percent year on year. Investment from Asia Pacific to Europe hit $39.5 billion in 2017 compared to $20.9 billion heading towards the Americas. The Asian delegation at MIPIM was drawn from 15 countries.

In its annual EMEA Investor Intentions Survey, released during MIPIM by CBRE, the world’s largest commercial real estate services and investment firm noted that 33 percent of investors intend to deploy more capital in 2018 than last year, with 70 percent of investors actively pursuing ‘alternative’ assets. In the alternatives sector, investment volumes have risen 45% in the last 10 years to hit €23.6 billion in 2017. Among the assets drawing strongest investor interest are student housing and retirement living.

CBRE confirmed that 2017 was a record year for real estate investment in Europe with volumes totalling €291 billion.

The report said that for European investors the most sought-after real estate assets are industrial, notably logistics. CBRE noted that is the first time industrial has overtaken office investment and the interest in logistics clearly reflects the growth in e-commerce.

With hundreds of ambitious urban development projects on show throughout the event, MIPIM 2018’s central theme ‘Mapping World Urbanity,’ focused attention on the need for city authorities and real estate companies to take a joined-up strategic approach to urban development at a time when cities house over 50 percent of the world’s population.

Turkey’s Minister for the Environment and Urbanisation, Mehmet Ozhaseki, said his country is now totally focused on its environmental strategy, particularly regarding the country’s cities. “The primary problem is the urban environment, which emerged as a result of unauthorised and unplanned housing construction.” The minister added that unplanned industrialisation is also a cause of concern. “Industrial areas without sufficient infrastructure and organisation cause exposure to major environmental pollution.” Turkey has recently launched its ‘My Environment is You’ and ‘Zero Waste Project’ initiatives.

Mayor of Oslo, Raymond Johansen, underlined the importance of addressing the major challenges facing city administrators. “We are responsible for 70 percent of CO2 and climate change is visible. We have to act. We cannot let the next generation be responsible for the problem,” he told MIPIM attendees at the Reinventing Cities conference panel.

In an impassioned address at MIPIM’s Thinkers and Leaders conference, Dr Auma Obama, Founder and Managing Director of the Sauti Kuu Foundation, called on the real estate industry and political leaders not to forget development in rural areas. “If you invest in the rural area and make it liveable, you will get rid of the (urban) slums.” Kenyan-born Dr Obama also urged the real estate industry to listen to the young people that her foundation represents. “As adults we don’t listen to children and if we listen we don’t take what they say seriously, but they are our future.”

Taking the view of the young into consideration was also the central theme of MIPIM’s Opening Keynote address by 20-year old American author, lecturer and advocate for the young, Adora Svitak.

She stressed that planning the cities and urban environments of the future required “tuning into the attitudes of youth.” Adora Svitak added that urban design is “not just a logistical challenge but a moral one because our global cities hold up mirrors to humanity’s soul.”

Meanwhile elsewhere in MIPIM, several panels and networking events addressed the question of equality and diversity within the real estate industry. At the third edition of MIPIM’s women in real estate networking event – the largest to date – Ivanhoe Cambridge President Natalie Palladitcheff told the audience, “What I really want is boards that would love to have women because they bring something…they bring a new dynamism and a new way of looking at things…more than having women against men.”

With real estate playing such an important role in many national economies, MIPIM welcomed government ministers from a host of countries that included France, Turkey, the UK, Russia, Poland, Egypt, Israel and Abu Dhabi.

France’s Minister of Territorial Cohesion, Jacques Mezard, conducted the official opening of MIPIM 2018 on March 13. Speaking to reporters about investment opportunities in his country, the minister said that France’s President Emmanuel Macron is pro-investment and that France now has a dynamic international image.

Attending MIPIM to promote Poland’s Tricity region comprised of Gdansk, Sopot and Gdynia, former Polish President Lech Walesa told developers that they should forget the past and build with the younger generation in mind.

Mayor of Paris, Anne Hidalgo, current Chair of the C40 alliance of world cities devoted to carbon neutrality and urban regeneration, reminded MIPIM delegates that cities are now “at the vanguard of great change.” Mayor Hidalgo said that Paris has opted to support the most innovative, quality schemes, rather than the cheapest projects.

In a significant development, Leipzig attended its first MIPIM. Cities from western Germany have been part of MIPIM for years, but their eastern counterparts have been scarce at the event. Mayor Burkhard Jung said Leipzig had suffered significant population decline in the post-unification period but is now the fastest-growing city in Germany. He noted that the city has rebuilt itself around five sectors – automotive, logistics, media & creative, environment and healthcare.

Day one of MIPIM 2018 saw representatives from some 60 of the world’s largest sovereign wealth, pension, institutional and insurance company investment funds come together for the annual Re-Invest Summit. Combined, the participating companies represent over €650 billion worth of real estate assets under management.

Throughout the week, investors on conference panels and in the Palais exhibition zone acknowledged that the increasing importance of cities as economic drivers, has led them to adopt a city-by-city investment strategy compared to a country or regional approach of previous years.

During the closed-door RE-Invest discussions on March 13, investment specialists agreed that the real estate industry needs to increase its expertise in new technology in order to integrate tech developments in mid and long-term strategies. KPMG’s UK Head of Real Estate, Andy Pyle, commented that some investment companies are asking themselves whether they are set up correctly to deal with the future challenges of technology.

A poll of the RE-Invest participants showed that 40% planned to revise their investment strategy due to the potential of new technology.

“In 2015 we took the digital revolution as MIPIM’s central theme and there was a degree of scepticism, even resistance within the industry about embracing tech-driven change. This year tech is increasingly integrated into the MIPIM programme with the third edition of the international MIPIM Startup Competition, the fourth edition of the MIPIM Innovation Forum and conference discussions on tech that ranged from how self-driving cars will change cities to what millennials expect from the smart houses of the future,” said MIPIM Director Ronan Vaspart.

Following qualifying rounds of the MIPIM Startup Competition in London, Hong Kong and New York, the competition finals took place on March 14 with Norway’s Disruptive Technologies chosen as the 2018 winner. Founded in 2013, the Norwegian company uses miniature wireless sensors connected to cloud connectors to collect and analyse data that can be used for space monitoring or comfort management within buildings. According to Disruptive Technologies CEO, Erik Fossum Faerevaag, “This sensor allows us to do cost savings, increase margins and improve tenant relations.”

Continuing its mission to serve the global real estate industry, June 20-21, 2018 will see the launch of MIPIM PropTech Europe in Paris. The French government has put its weight behind developing the country’s tech sector and Secretary of State at the Ministry of Territorial Cohesion, Julien Denormandie, spent much of his time at MIPIM enthusiastically talking with tech and startup companies in the Innovation Forum.

“Technology is increasingly providing innovative solutions and ideas for the real estate sector and MIPIM PropTech Europe will be a unique opportunity for real estate leaders, tech companies and investors to come together to discuss tech trends and do business,” commented Reed MIDEM’s Filippo Rean.