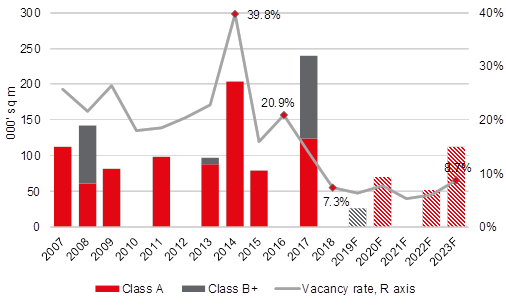 According to JLL, the high demand for offices, including government sector, has led to reduction of the vacancy rate by two thirds during 2016-2018, to 7.3 percent. Although the announced completions in the next five years is significant, the vacancy rate will stay stable at this low level, which will support further rental rate increase.

The Moscow City office vacancy rate declined below not only the market average level, but also below the Central Business District (CBD) indicator for the first time, to 7.3 percent vs 7.8 percent in the CBD. The highest vacancy rate of 39.8 percent was recorded in 2014 when 204,000 sqm entered the market.

“Taking into account the take-up amount in the last few years and announced new office projects, continued vacancy rate reduction with slight increase in 2022 and 2023 is expected,” commented Alexander Bazhenov, Office Market Analyst, JLL, Russia & CIS. “In the next five years the overall Moscow City office completions planned at 262,000 sqm. The bulk of those amount is expected for delivery in 2022-2023, 164,000 sqm.”

There were no buildings delivered in Moscow City in 2018, whereas the 2017 completions were at 240,000 sqm, the highest result in the submarket ever. Furthermore, among two buildings completed, IQ-quarter and Federation Tower East, were either fully or partially occupied before official completion. In 2019, the only office centre planned for completion is OKO Phase II, part of which was already leased by PJSC Rosbank.

After a double drop of the take-up in 2012-2015, the indicator increased significantly in 2016-2017, when the overall take-up amounted to more than 400,000 sqm. Following such an increase of demand, it has declined by half in 2018 compared to 2017, to 89,000 sqm. However, the reason for such a reduction was not a slowdown in demand, but the limited supply, only 83,000 sqm of offices were available in the submarket. Moreover, the supply of large office blocks of more than 10,000 sqm shortened from five buildings in 2015 to only two buildings now.

The limited office availability has let some landlords to increase rents, which has resulted in the average asking rental rate growth in the submarket of 16 percent YoY in 2018, to 30,600 RUB/sqm/year.

“The shortage of available office space is the main factor of rent growth in Moscow City. The delivery of new projects will unlikely lead to the vacancy rate increase, as those offices are already on the tenants’ radar, which is confirmed by 15,500 sqm pre-lease deal in OKO Phase II closed with JLL in Q1 2019,” commented Elizaveta Golysheva, Head of Office Agency, JLL, Russia & CIS. “Rents are expected to continue increasing, even though slower than in the previous year. By 2023 we expect rents to increase by 14-16 percent compared to 2018 level.”