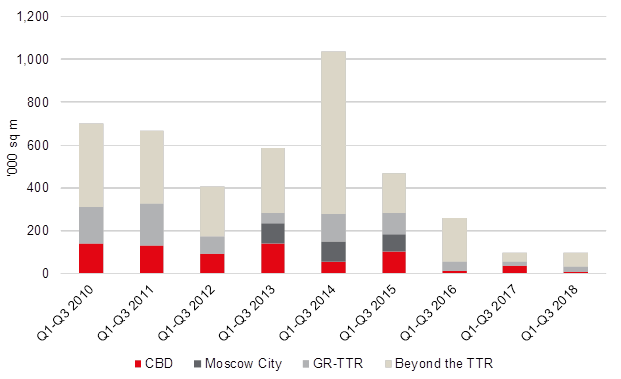 According to JLL, in Q1-Q3 2018, the overall take-up volume increased by 28 percent YoY to 983,000 sqm. Office completions, on the contrary, continued to lag, and the annual volume would likely reach a record low. In this environment tenants aim to choose premises faster, as the availability in key business districts is shrinking.

The take-up increased significantly both in the Central Business District (CBD; +29 percent YoY in Q1-Q3, to 208,000 sqm) and beyond the Third Transport Ring (TTR; +51 percent YoY, to 450,000 sqm). Media Instinct in Kuntsevo Plaza (6,000 sqm), Ingrad in Hermitage Plaza (4,600 sqm) and the first deal of international flexible offices operator WeWork in Krasnaya Roza (4,300 sqm) were prominent deals in Q3 2018. Although there were no deals of over 10,000 sqm, the bulk of activity represented expansion of current tenants and inflow of new tenants.

The new wave of decentralization is being observed, with deals beyond the TTR accounting for 46 percent of the Q1-Q3 take-up, up from 39 percent in Q1-Q3 2017.

“Such a shift took place due to the shortage of vacant space in key submarkets, the CBD and Moscow City. The vacancy rate there in Q3 2018 was 8.1 percent and 8.3 percent respectively. The declining availability affected rents. The average Class A rental rate increased by 13 percent and 17 percent in the CBD and Moscow City respectively, reaching in both RUB30,300 per sqm per year (net of operating expenses and VAT),” comments Elizaveta Golysheva, Head of Office Agency, JLL, Russia & CIS. “The shortage of suitable premises in existing buildings in these submarkets and limited new supply stimulate tenants to consider offices located beyond the TTR”.

In Q3 2018, only three new buildings entered the market, with the combined office area of 55,000 sq m. The bulk of completions was Class A (85%). All the completed buildings are located beyond the Garden Ring: Novion near Olimpiysky Avenue, VTB Arena Park on Leningradsky Avenue and Gallery 76 on Profsoyuznaya Street. In Q1-Q3 2018, the overall completions were at 95,000, which matches the Q1-Q3 2017 results (96,000 sqm).

“The trend for delaying the building commissioning continues. In the beginning of the year, the expected completions were at 250,000 sqm, and now the updated figure declined to 172,000 sqm. This year will set another record of low completions on the Moscow office market,” says Olesya Dzuba, Head of Research, JLL, Russia & CIS. “Nevertheless, we expect rental growth to provide confidence to landlords, stimulating faster commissioning of completed buildings, and boosting construction activity.”