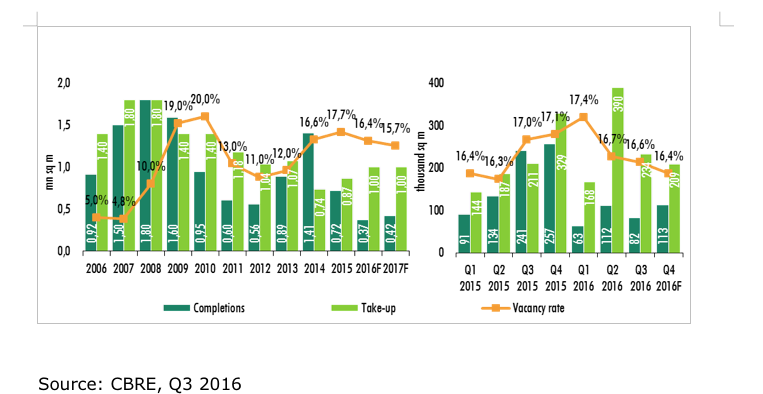 CBRE has summarized Q3 2016 results of the Moscow Office market. According to the report, the volume of new construction in CBD in 2017 will return to the levels of 2014-2015 and will reach around 100,000 sqm. Thus, about 75 percent of the new delivery in 2017 will localize in two key submarkets: Moscow-City and CBD.

Tenants and buyers have become more inclined to choose new Class A premises, for which prices and rental rates are still at reduced levels. The volume of new transactions in Q4 2016 may reach 210,000 sqm and 1 million sqm for the whole 2016. After a sharp decline of vacancy rates in Class A in Q2 2016, in Q3 vacancy dropped by 0.1 ppts and stabilized at 19.2 percent.

Change in vacancy rates in Class A resulted in a decline of overall vacancy in the market by 0.1 ppts for the quarter. Vacancy in Class B did not change as a significant amount of new construction (90 percent) contributed to Class B, which effectively replaced absorbed area. The demand values, combined with low levels of new completion will lead decrease in vacancy rate by 0.2 ppts to 16.4 percent in Q4 2016.

Elena Denisova, Senior Director, Head of Office Department of CBRE in Russia said: “Activity in the office market increased in Q3 2016. If in Q2 demand was largely maintained by two large transactions related to the settlement of debt, in Q3 the number of deals transacted at the market terms increased, which suggests that tenants and buyers have begun to make decisions and in some sense aware of the risk of “closing window of opportunity” for getting the best deal in the right building. The volume of lease renewals and renegotiations is gradually declining. We expect that this trend will strengthen in Q4. According to our forecasts, the volume of transactions for new leases and acquisitions of office spaces will reach pre-crisis levels of 2012-2013 by the end of 2016.”