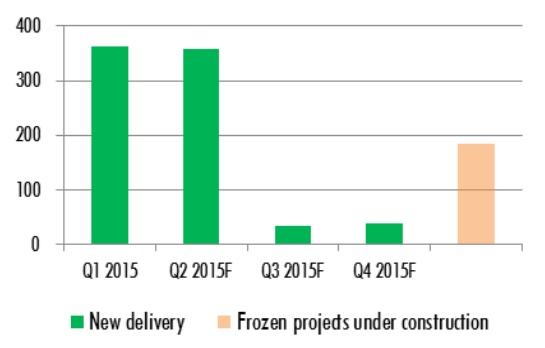 In Q1 the vacancy rate in the Moscow warehouse market exceeded 10 percent for the first time in modern market history, and amounted to 10.9 percent, according to the latest research from CBRE. This record figure of 1 million sqm of vacant space was mostly formed by the active delivery of new properties. However, further increase in vacancy is unlikely.

The Moscow warehouse market is characterised by the following trends: A large number of projects launched in 2014 are still coming to the market. As a result, supply in H1 2015 remains high: 363,000 sqm was commissioned in Q1 and 359,000 sqm is expected for delivery in Q2. The development may almost come to halt in H2 2015 compensating a surplus of unoccupied space on the market. The lack of new projects should result in the decrease of options for major tenants.

Despite weak demand, quarterly take-up amounted to 255,000 sqm and 40 percent of it was produced by just one just one XXL-Warehouse transaction (100,000 sqm). 90 percent of current market offerings, including both delivered projects and those under construction, are denominated in RUR. Average weighted rents have not changed since the beginning of the year and have stabilised at RUR 4,600 per sqm.

Financially strong, demand-side companies have fixed profitable commercial terms. Good news about the macroeconomic situation, in particular, a lower than expected decline in business activity and consumer demand – may result in demand already in Q2. 363,000 sqm was delivered to the market in Q1 2015, and the total stock reached 9.151 million sqm.

The following buildings were completed:
• Building 10 in PNK-Severnoe Sheremetievo (65,000 sqm) developed by PNK Group.
• 1st phase of Sherrizone-Nord warehouse complex (55,000 sqm) by Griffin Partners.
• The first building in Logopark Sofyino (developer – AT Nedvizhimost) with the total area of 92,000 sqm
• Two buildings in South Gate Industrial Park with the total area of 46,000 and 41,000 sqm accordingly.

359,000 sqm is planned for delivery in Q2 2015. The main part of the expected warehouse space is to be delivered in the southern part of the region where PNK Group is planning to complete a 100,000 sqm warehouse in PNK-Chekhov 3. Another significant contribution to delivery in Q2 will be made by the Kholmogory project in the North-East; this logistics park is being developed by Atlant Capital Partners.

Distribution of new delivery in 2015 is very uneven in terms of timing. About 97 percent of 2015 completions are to be commissioned in H1 (772,000 of the 794,000 sqm expected for the whole of 2015). The main reason for such a skewing is unprofitable commercial conditions for developers in the medium term. At the same time, construction costs, which dropped significantly due to the Rouble devaluation, have already started recovering as a result of rising inflation. National currency has also been strengthening in February-April 2015.

At the moment developers are focused on on-going projects and have not announced any new ones for almost a year, which means that in the short term potential occupiers will only be able to choose between existing projects.

Along with this, a number of renewal deals were closed on the market, totalling 96,000 sqm. The largest transaction of the quarter was the BTS-deal between Leroy Merlin and developer Radius Group – according to their agreement, a 100,000 sqm building is to be constructed for the DIY retailer in South Gate Industrial Park. This deal was the only forward-looking deal in Q1. The rest of demand activity was produced by deals involving the leasing of currently vacant space (40 percent of space leased was on second-hand premises).

Among significant transactions in Q1 2015 were:
• Major Logistics leased 24,000 sqm in Logopark Sever 2
• Distribution company Veles group leased 15,000 sqm in building 7 of PNK-Chekhov 2. The lease agreement was signed with the new owner of the building following the purchase of the building from the developer PNK Group.

The amount of vacant space reached almost 1 million sqm, representing 10.9 percent of the total stock. 67 percent of the 995,000 sqm currently vacant is in newly completed buildings, while 33 percent is existing, completed space, which became available after tenants had left it. Another 359,000 sqm of buildings currently nearing completion will come onto the market in Q2 2015, 254,000 sq m of which is available for the market. As a result, the vacancy rate is likely to remain at its current level – higher than 10 percent – until the end of the Q2.

Oxana Fedulova, Associate Director, Research Department in CBRE in Russia said: “The record new delivery in 2014 and new projects of the first half of 2015 formed significant stock of the vacant warehouse space. With the current business activity, the vacancy rate of 10 percent could become the objective reality in the next couple of quarters. It will go down much more slowly than it increased.”

Anton Alyabyev, Director, Head of Industrial & Logistic Agency CBRE in Russia, said: “The current situation in the market formed the optimal terms for tenants and buyers: the rental rates are on the minimal level, thus there is a big stock of vacant space available in the market.”

He added: “But this “window of opportunities” is really short-term. The conditions have formed to fix the rental rates and stop them from going down. The slowly going down vacancy rate together with the lack of new delivery will be pushing the warehouse prices up in the nearest future. There will be no further improvement of achievable commercial terms for tenants.”