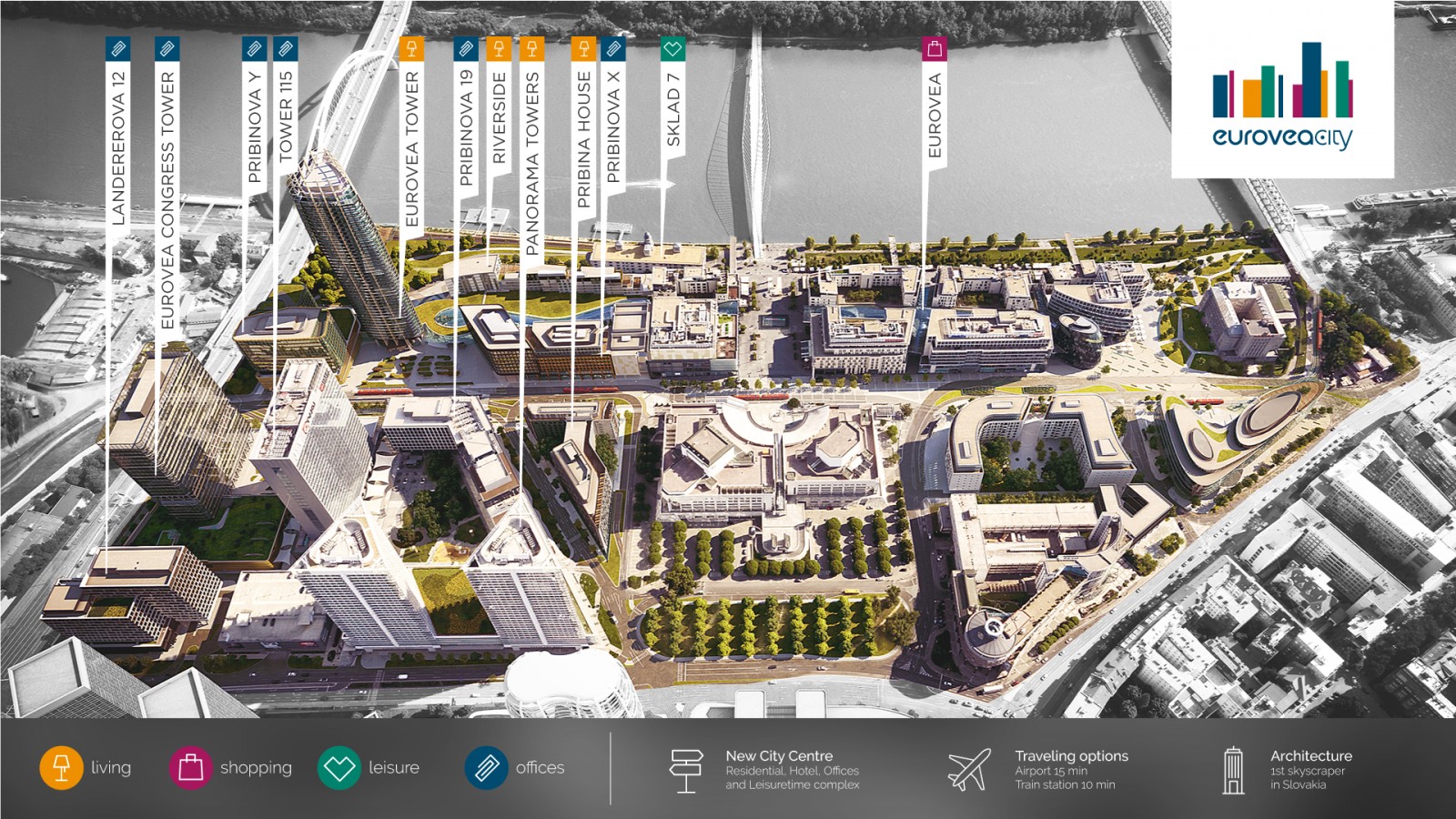 As a key part of the new emerging city centre, architects and urban planners are compelled to closely examine EUROVEA CITY’s architecture as well as overall urbanism, public spaces, foot-flow, and transport. Layout of buildings and regulatory conditions have applied since the very first constructions in the zone – today’s Tower 115 and Slovak National Theatre (SND) – and subsequent developments also respect this system and are creating a fully-fledged city district. Based on this, EUROVEA CITY’s developer – J&T REAL ESTATE (JTRE) – has named the zone’s main buildings and future landmarks. And Beth Galí – the renowned Barcelona-based architect – who is working on the overall design of EUROVEA CITY’s public spaces, presented her proposal for the optimal organisation of Pribinova boulevard: as a place that supports all mobility types and pedestrian-friendly.

“At JTRE we have a clear vision of how Bratislava should develop. We always consider how a city naturally evolves and needs to change – because headline projects such as EUROVEA CITY will influence city life for many years to come. We want our projects to be in harmony with both the city and its residents. That’s why we develop comprehensive and conceptual designs such as the urban solution of the EUROVEA CITY district and public spaces, as well as the recently presented design for the central tram route,” says JTRE’s Peter Korbačka who is behind the EUROVEA CITY district creative concept.

“The developmental organization and regulatory conditions for the Pribinova zone were set by the city when the ground was first broken in the area (today’s Tower 115 and SND) on the basis of a proposal by the Bauer, Paňák and Kusý architect team in 1988,” explains GFI architect Radoslav Grečmal. “Just like the zone’s current buildings, future constructions will also fully respect and transform this system into a genuine city district.”

Such regulatory conditions especially refer to the parallel waterfront-orientated construction lines of development at Pribinova boulevard and towards Landererova Street, as well as the block form of construction typical of the neighbouring Old Town area. The system also serves to define building heights, which graduate from Dostojevsky Row towards Košicka Street.

“The main and most attractive public spaces have always been considered the pedestrian waterfront area and SND square – which respect and highlight all projects in the area. An important city space will be Pribinova boulevard with views towards Bratislava Castle, which will be expanded by small squares in entrance areas to buildings and passages,” explains Grečmal.

Renowned Barcelona-based architect and urban planner Beth Galí has been working on the conceptual solution of the area’s public spaces for several months. During her first presentation in Bratislava she outlined her principles for public spaces, and a few months later spoke about the opportunities and obstacles she had identified with her team in the Pribinova zone. She has also recently presented an elaborated conceptual solution for people- and traffic-flow in the locality, focusing on the key Pribinova boulevard.

“Defining how people use and move in the zone is the first and prerequisite step before the final design of the appearance and form of public space – up to details such as selecting surfaces and street furniture,” says Galí in explaining her approach and system.

She adds that the traditional approach that “wider roads means less traffic density in cities” has proven a fallacy. City streets are not roads, but unfortunately the tendency of approaches towards urbanism is exactly roads for cars. Galí considers that Bratislava still has time to avoid the mistakes other cities have made.

Beth Galí has set these goals for EUROVEA CITY:

• EUROVEA CITY will become a district with a distinctive city life, character and identity. Its public spaces will reflect uniqueness and continuity through a network of pavements and street furniture.

For the future organization of Pribinova boulevard, Galí said that all mobility options in the city – pedestrian mobility, electric scooters, bicycles, motorcycles, cars, and public transport – can co-exist in one street without impeding the pedestrian area. The boulevard forms the main axis designed on the city promenade with an avenue of tree’s projecting a specific character and identity – representing the intersection between Eurovea’s southern and northern parts. The south has public spaces along the Danube riverside, and in the north streets connect with Bratislava’s historical centre.

Galí considers trams to be a particularly dynamic and key element in cities the size of Bratislava. European experts consider tramways to be the ideal system in cities with less than 800,000 residents – because in million+ cities tram lines can impede the smooth-running of the overall urban transport network.

“A good example are the trams in the French city of Tours – which is almost the size of Bratislava. Trams have recently been introduced as a new mobility system in the city centre, with routes leading to numerous key buildings. A result has been higher quality of public spaces, for example in the squares through which the tram runs, as well as an overall enhancement of urban life,” she observes.