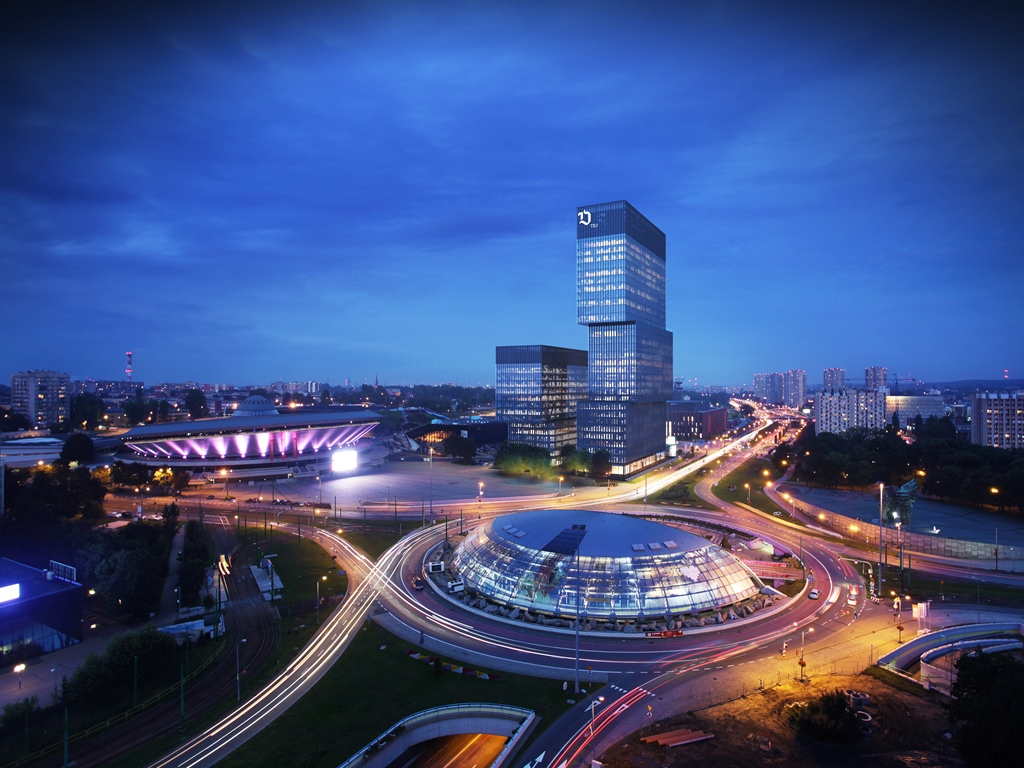 The eco-friendly and characteristic .KTW office buildings have been launched in Katowice. The authors of this architectural project are Przemo Łukasik and Łukasz Zagała from the Medusa Group studio, while TDJ Estate is the investor.

The .KTW I and .KTW II office buildings are located in the centre of Katowice and a metropolitan area of 2 million people, near the “Spodek” Arena and the key regional traffic and public communication routes covering the entire agglomeration. In the neighbourhood of the future buildings there will also be a Cultural Zone – an internationally-unique example of revitalising post-industrial areas of the city centre. Leading architectural studios are the co-creators of the Cultural Zone, namely Riegler Riewe Architekten, JEMS Architekci, as well as the local Konior Studio.

“The .KTW structure may remind one of the surrounding buildings of the Silesian Museum, Polish National Radio Symphony Orchestra and the International Congress Centre, arranged one on top of the other but shifted slightly with respect to each other. When it comes to the symbolic aspect, the structure corresponds to the Silesian work code defined by conscientiousness, fairness, and modesty. This is not a classically beautiful structure, nothing here was created for show, but it expresses a certain idea and fantasy,” said Łukasz Zagała, co-owner of Medusa Group design studio.

“When designing the .KTW office buildings, we paid specific attention to the role of the surroundings and the adjacent facilities. Our aim was to create buildings which would compete with the “Spodek” Arena. To show respect to this iconic structure of Katowice, we decided to completely do away with solutions based on circles, ellipsis or soft lines. Their application in our architectural concept would weaken its exceptionality. What unites the two buildings is an attempt to go beyond the transient fashion trends, allowing the buildings to remain in time regardless of the decade and yet still adapt to the contemporary architecture,” said Przemo Łukasik co-owner of Medusa Group design studio.

The TDJ Estate investment near the “Spodek” covers the development of two high-rise buildings. The first one, .KTW I will be 66-metres tall and will feature 14 storeys. .KTW II will have a height of 133 metres and will feature 31 storeys above ground. The total commercial area of .KTW will be 61.800 sqm.

The underground garage joining the two buildings will feature a total of 626 parking spaces.

“To TDJ Group, development of the .KTW office buildings means solid evidence of the strategy of developing in new markets. We want this project to become one of the business symbols of Upper Silesia and the Zagłębie Region. We believe that this will be an important impulse for business development in this area, confirming its actual potential,” said Maicej Wójcik, Board President, TDJ Estate. “The buildings, besides being spectacular, offer a flexible product which is adjusted to the highest market standards. For the last couple of months, we have been discussing initial terms with potential tenants in relation to .KTW. However, because this project has not been officially presented yet, we could not specify many details.”

The project will be completed in stages – the buildings will not be developed simultaneously but in two stages, at different periods. This should allow for the possibility of smoother commercialisation and create a perspective for flexible growth for the potential tenants. Furthermore, the investment will be completed in line with the BREEAM certificate, which takes into account such factors as energy consumption, innovativeness, impact of the applied solutions and materials on human health and comfort of work of the users, as well as building management. The expected assessment of certification of the .KTW I is Very Good.

According to the adopted business assumptions, in advance of the initial lease agreements, the first stage of construction works will be launched at the turn of the second quarter of 2016. As a result, the .KTW I building will be developed within two years.