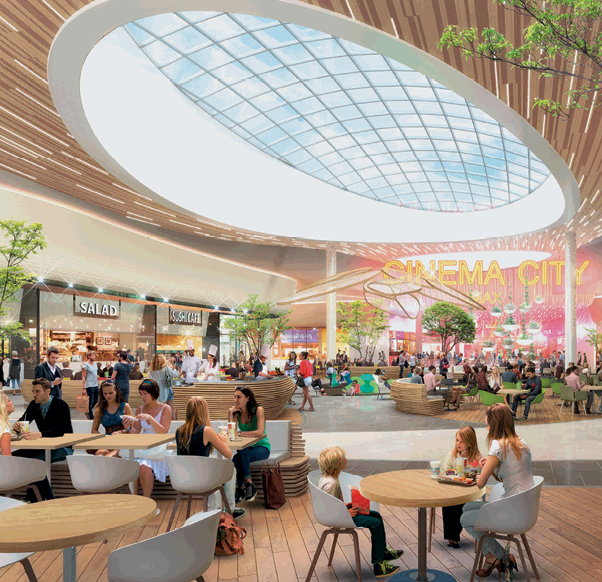 Poland continues to attract brands from across Europe. The significance and the share of the Food & Beverage proposition within shopping centres continues to grow. Furthermore, both new retail concepts and mixed-use projects have become increasingly popular as well.

“According to analyses conducted by JLL, there was approx. 590,000 sqm of retail space under development by the end of Q3 2017 in the shopping centre format alone with delivery to market scheduled for 2017-2019. In Q4 2017, the shopping centre market is likely to grow by an additional 193,000 sqm,” commented Joanna Tomczyk, Research Analyst at JLL.

The biggest objects with market delivery scheduled for Q4 2017

“The main factor that drives the development of the retail market is not the amount, but the quality of space on offer. Therefore, a common development pattern for older shopping centres is to remodel, extend, rebuild or change the functionality of existing projects into, for example, outlet centres. Furthermore, mixed-use projects are on the increase as well, mostly in Warsaw. This is illustrated by EC Powiśle, CEDET, Browary Warszawskie, Centrum Marszałkowska and Koneser in Warsaw as well as Monopolis in Łódź”, said Edyta Potera, National Director, Retail Agency, JLL.

The Food & Beverage sector is growing in importance as well. Already up to 12.5 percent of leasable space found within shopping centres throughout major Polish cities is occupied by restaurant units. This share is likely to grow even further as a response to the changing needs and preferences of consumers.

“Modern restaurant concepts, developed mainly in Warsaw – such as Hala Koszyki, EC Powiśle, Hala Gwardii and Soho Factory, are proving to be very popular. This trend is recognized and is being adopted by other Polish agglomerations, such as Łódź, which is the location for Monopolis, one of the most original mixed-use projects of recent years,” added Edyta Potera.

Poland continues to be an attractive market for foreign brands, due to its considerable size and the increasing purchasing power of its inhabitants. A number of new brands entered the Polish market in Q3 2017 many of which have launched their stores in Warsaw, including Hamleys from the UK, one of the world’s largest toy stores chains, which opened its first store in the Galeria Północna shopping centre. Other notable market entrants are Russian fashion brands from the Melon Group – Zarina and Love Republic – which both opened their first stores in Galeria Północna. Furthermore, this newly opened retail scheme was where another chain made its debut: KappAhl opened the first independent store of Newbie, a baby clothes shop. In August 2017, Victoria’s Secret opened its first full-assortment store in the Arkadia shopping centre in Warsaw. Nissa opened its store in the same shopping centre in September. After several years of absence from the Polish market, Carpisa, an Italian producer of women’s handbags, suitcases and accessories, opened a store in Galeria Wileńska in Warsaw. In Q3 2017, Max Premium Burgers, a restaurant concept from Sweden, opened its first Polish restaurant in Galeria Dominikańska in Wrocław.

Prime shopping centre rents, which refer to shop units of circa 100 sqm, earmarked for fashion & accessories and located in the best-performing assets in a given city, are as usual at their highest in Warsaw (up to €130/ sqm/ month). The levels of rents across major cities remained relatively stable compared to previous quarters, ranging from €45/ sqm/ month to €60/ sqm/ month.

“2017 to date has seen over €1.26 billion of investment transactions closed on the retail market. We firmly believe that Q4 2017 will bring a number of significant transactions which could drive the total retail investment volume to a level of about €2 billion,” commented Marcin Sulewski, Associate Director, Retail Investment CEE, JLL.

The largest transactions concluded on the retail market in Q3 2017 include: the sale of Galeria Słoneczna in Radom by White Star Real Estate and Legend Eastern Europe (Poland) Limited Partnership to REICO Česká Spořitelna for around €164 million, the sales of Galeria Solna in Inowrocław by Libra Project and Grupa Acteeum to Echo Polska Properties for €55.4 million, and the purchase of seven retail objects located in Kutno, Ciechanów, Piekary Śląśkie, Józefosław, Lubin, Poznań and Szczecin by Master Management from Direkt Invest Poland Funds / HBK Service for an undisclosed price.

Prime yields for best-in-class shopping centres in Poland remain stable, at 5.0 percent, while prime retail parks are expected to trade at approximately 7.0 percent.