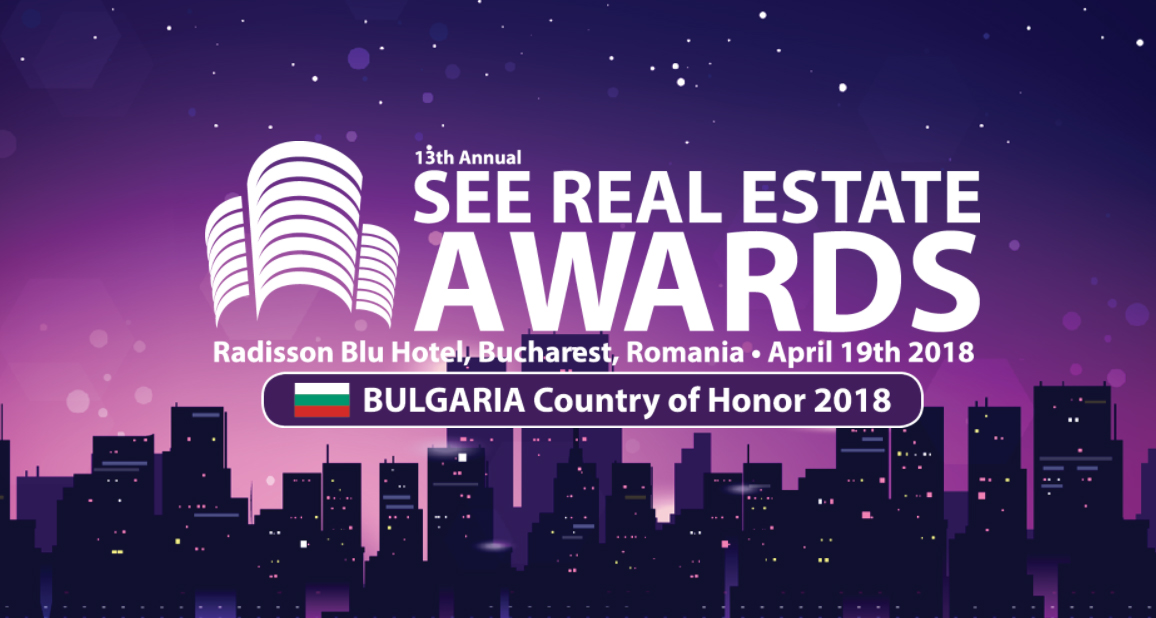 Heralded as the SEE region’s premier real estate event, EuropaProperty’s SEE Real Estate Awards, now in its 13th year, is recognised as one of the most respected and distinguished awards events, as well as one of the most trusted. With it’s unique format of gathering local, regional and international CRE professionals in an atmosphere conducive to celebrating the region’s success stories and discussing future opportunities, the event is unrivalled.

With the commercial real estate, investment, development, office, industrial and retail sectors all picking up in Romania and the SEE region this year’s event promises to be one of the most important, with key local and international players already in or wanting to enter these promising markets participating.

New for 2018 – this year EuropaProperty is proud to announce Bulgaria as the Country of Honour. Bulgaria is regarded as offering both development and investment opportunities as it has potentially higher returns, albeit with more perceived risk, than the more established CEE markets. GDP growth is predicted at just below 3 percent for 2018.

EuropaProperty is now celebrating 13 years of success in the region and once again returning to the Radisson Blu Hotel where on April 19th the top performers representing the most outstanding and accomplished projects, companies and individuals throughout the SEE region in 2017 will be celebrated.

Last year saw some of the region’s leading developer, investor and professional service providers in South Eastern Europe, presented with big prizes for their activities and accomplishments. Companies were judged on their overall market contribution, quality of customer services, market innovation, commercial success, leadership and market penetration.
The quality and number of nominations at last year’s event suggested an underlying strength to the region’s property markets, resulting in many companies winning multiple awards, the biggest of which was consultancy firm CBRE, who picked up all the agency awards as well as Property Management Firm and Professional Woman of the Year.

Forte Partners was also a big office sector last year. Not only did the company win the Office Developer of the Year, it also picked up the Concept & Design Project of the Year for their office project in Bucharest, The Bridge. Serbia’s BW Galerija by Eagle Hills also won a Concept & Design award in the retail category.

Project of the Year award winners were rated according to quality of design, building efficiency, quality of location, environmental concerns and commercial success. The judges decided that last year’s best retail development was ParkLake by Sonae Sierra. On the residential side, the Residential Development of the Year prize went to Coresi Avantgarden, a project by Immochan and Avantgarden Immo Invest, who also collected the Residential Developer of the Year award.

Accentuating the interest in the SEE region’s retail sector, several key retailers were awarded. Retailer of the Year awards were given to retailers active throughout the region based on their market innovation, expansion, contribution to the market, market share, concept and design, and commercial success.

EuropaProperty focuses on bringing together end-users and industry professionals. This year’s attendees are the most active retailers, BPO, shared services and IT companies, manufacturers, developers, investors, and commercial real estate professionals.

This one day event will also include the morning forum consisting of high-impact discussion-panels covering the region’s key sectors and issues followed by the evening’s opening cocktails, dinner and awards gala, with networking opportunities throughout the day and into the late evening.

An independent jury carries out the process of deciding between the nominations for the award categories. The members of the jury are all experienced real estate professionals, and are from every sector of the commercial real estate and retail industries in the region.

Nominations are now open and can be made online at www.seerealestateawards.com

This is one of the few events that sells out every year and with this one being no exception we strongly advice that you reserve your corporate table/sponsorship or partnership early. The 13th annual EuropaProperty SEE Real Estate Awards Gala & Forum will be held at the Radisson BLU Hotel in Bucharest, Romania, on April 19th.