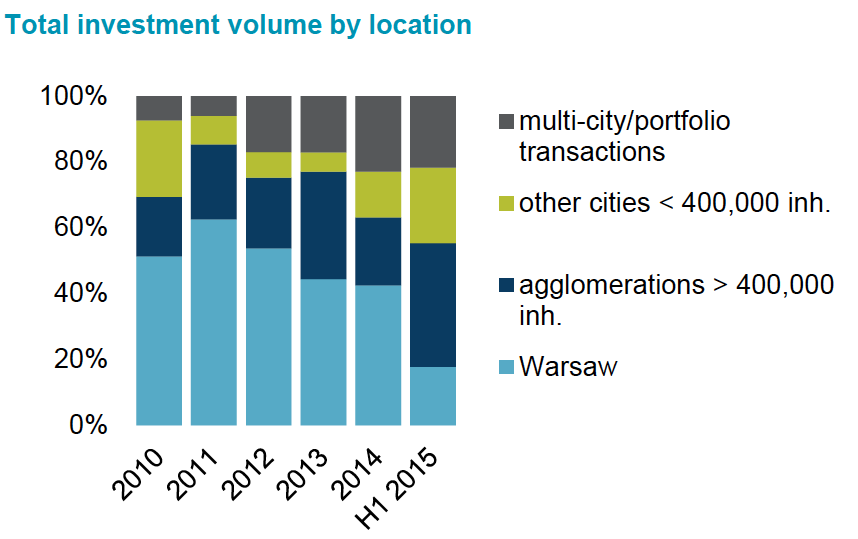 According to DTZ’s latest Investment Market Update, the commercial real estate investment volume in Poland totalled €801 million in H1 2015, down by 42 percent compared to the same period last year, and was at half the level seen six months ago.

The analysis carried out by DTZ suggests that this decrease was caused mainly by the lack of deals over €100 million in H1 2015. The market was dominated by transactions within the €50-100 million price range, accounting for 72 percent of the total volume. As a result, the average transaction value fell in H1 2015 to €40 million, down by a third compared to the corresponding period of 2014.

Kamila Wykrota, Head of Consulting & Research at DTZ, said: “Market sentiment has improved, and the demand for commercial property in Poland remains stable. New global players entered the Polish investment market, looking to penetrate it by buying real estate or acquiring successful investment platforms. The slowing of market activity in the first half of the year stems from a limited supply of prime assets.”

Offices remained the most popular asset class with a market share of 45 percent (€362 million) in H1 2015. This was followed by retail at 32 percent (€260 million), and industrial assets at 19 percent (€149 million). Unlike in previous years, investors were more prone to choosing assets in regional markets, with 82 percent of deals concluded outside of the capital. Across all sectors, Warsaw saw the slowest activity in the last three years. Investors are less averse to risk thanks to a better market sentiment and increased developer activity in both large and smaller Polish cities. Office activity was concentrated in leading BPO/SSC destinations led by Wrocław and Kraków, while retail investors targeted shopping centre assets in medium sized-agglomerations which provide opportunities for creating added value. The demand for industrial assets is increasing, so we can expect this sector to grow in H2 2015.

Investment activity in the Polish commercial real estate market continued to be dominated by foreign investors, who accounted for 90 percent of purchases, investing €720 million in H1 2015. Since H2 2014, we have seen an increased activity of the Americans, who in the last 12 months invested almost €1 billion in Poland. They were the most active players in H1 2015, responsible for as much as 45 percent of all foreign investment. Another third was added by international investors, followed by German capital at 24 percent.

From the type of investor point of view, funds still dominate the market, having invested €600 million in H1 2015. Investment funds are expected to continue as the key investors, despite a growing interest of foreign institutional investors looking to diversify their portfolios. We also expect several new players to enter the market, especially Nordic and Asia-Pacific entities.

After a slow start to the year, the investment market in Poland is expected to rebound in the second half of 2015. Additionally, Poland is likely to benefit from increased demand of non-European investors, who increasingly look for opportunities beyond Europe’s core markets of UK, Germany and France. Investors are expected to continue to shift focus to regional markets in search of opportunities and enhanced returns.

Kamila Wykrota, added: “As many large deals across all sectors are in the pipeline, and several large transactions are to close in the second half of the year, we expect the transaction volume to increase. We estimate that the full year activity will reach or even surpass €3 billion mark.”