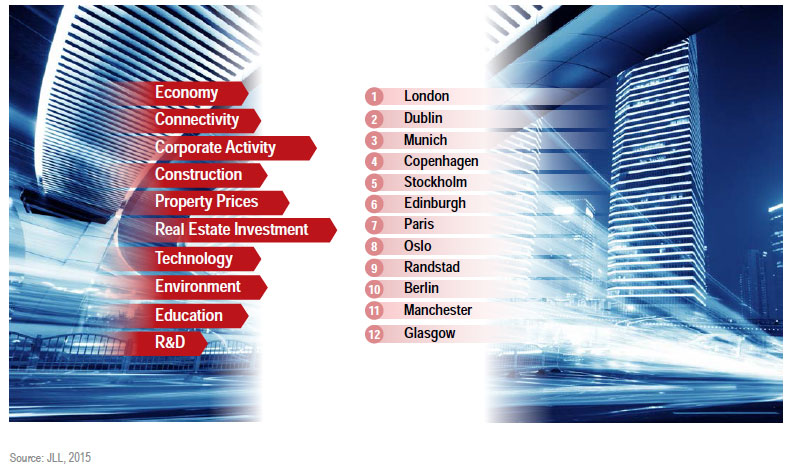 Twelve cities in Northwest Europe are successfully building forward momentum, according to new research by JLL.

The European Top 12 highlights Europe’s best performing cities on the basis of their short-term socio-economic and real estate momentum in combination with measures of the longer-term foundations for future success.

“Technology is a major element driving momentum, as well as attributes such as robust governance, favourable business-operating environments and highly transparent real estate markets. These all contribute to the success of the city and help drive in-migration and robust economic growth, which are boosting their attraction as investment destinations,” said Rosemary Feenan, Director, Global Research at JLL.

Both of Europe’s ‘Super Cities’, London (1st) and Paris (7th) are among the top performers although with quite different dynamics.

London is boosted by robust economic fundamentals and its increasing status as a global tech hub. This dynamism is feeding through into a positive outlook for commercial property prices and helping to drive the world’s highest levels of cross-border real estate investment.

Continued confidence in Paris saw 2014 real estate investment volumes rising to the highest levels since 2006 despite weaker national growth. Longer term momentum will be supported by ‘Le Grand Paris’ project an unprecedented €26 billion strategy (over a 15 year period) to strengthen the position of Paris as a globally-competitive world city.

Dublin (2nd) has registered the fastest office rental growth globally over the past year, as tech giants such as Google and Facebook and high-tech start-ups increase their presence.

Feenan concludes: “It is visionary leadership, as evident in London, Paris and Manchester, which is helping to propel these cities forward. Other cities have a newfound creative energy, developed organically from a compelling cocktail of proximity, density, world-class universities, entrepreneurialism and openness. These cities are joining with some of the world’s most high-tech connected urban economies, such as Stockholm and Munich, to make the European Top12 the most dynamic cities and real estate markets in the region.”