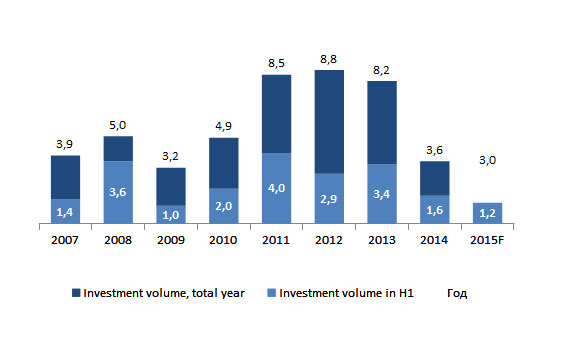 Office investment in Russia up 70 percent in H1 2015 – EuropaProperty

In the first half of 2015, investment in office real estate in Russia amounted to $579 million, which is up 70 percent y-o-y. Retail real estate in Russia, which has usually dominated demand, saw investment of only $208 million, which was a record low for the last few years. At the same time, deals that were suspended late last year due to the devaluation of the rouble are being rapidly closed, according to a report by Colliers International.

Total investment in Russian real estate in H1 2015 amounted to $1.23 billion, which is down 23 percent y-o-y. The decline is mainly due to a weak first quarter. The Moscow market was again on investor’s radar, with the capital seeing 81 percent of investment. The office sector, historically the most transparent and understandable for investors, attracted the largest amount of investment in the first half of 2015 – 47 percent. Warehouses and retail properties accounted for 19 percent and 17 percent, respectively. Multifunctional centres have been recently gaining in popularity – their share increased to 13 percent in H1 2015, up from an average of 10 percent over the past five years.

The largest investment transactions in H1 2015 were the sale of the Metropolis business centre (Building 1), the PNK-Chekhov I warehouse complex, the Mercedes-Benz Plaza business centre, as well as part of the Sponda portfolio – the Bakhrushin House business centre in Moscow and the Solnechny II shopping centre in Ramenskoye, Moscow Region.

A mismatch in the price expectations of buyers and sellers explains the limited number of transactions. Major players have adopted a wait-and-see attitude. At the same time, taking into account the decline in rental rates and capitalisation rates, investors now have profitable investment opportunities. However, almost no large transactions are being closed and owners are holding on to the most attractive assets, which is also reflected in the current size of investments.

During economic hard times, Russian investors usually dominate in the real estate investment market in Russia, and the presence of international players is reduced to a minimum. The share of foreign capital in total investment fell from 29 percent in Q1 2015 to 4 percent in Q2 2015. The Q1 figure was the result of one transaction with foreign capital. Nevertheless, foreign investors – particularly Asian investors – are still interested in the Russian market.

The high cost of bank financing is hindering the decline of capitalisation rates. In Q2 2015, the minimum rate of return in Moscow did not change and was at 9.5 -10.5 percent for the office and retail segments and 12-13 percent for storage facilities, depending on the terms of lease agreements, bank financing and the quality of covenants.

Stanislav Bibik, head of capital markets, Colliers International Russia, commented: “Despite the gradual reduction in the key policy rate of the Central Bank of Russia (on June 16, the rate was reduced to 11.5 percent), debt financing remains expensive and difficult to obtain, which is a limiting factor for the conclusion of investment transactions in Russia. In addition, fluctuations in the rouble exchange rate and oil prices are still determining factors for the Russian economy and the investment market as a whole. It is important to note that despite the current uncertainty in the market, we are seeing an increased number of significant investment transactions, which is undoubtedly an important signal for the return of investors to the market and growing interest in the Russian commercial real estate.”