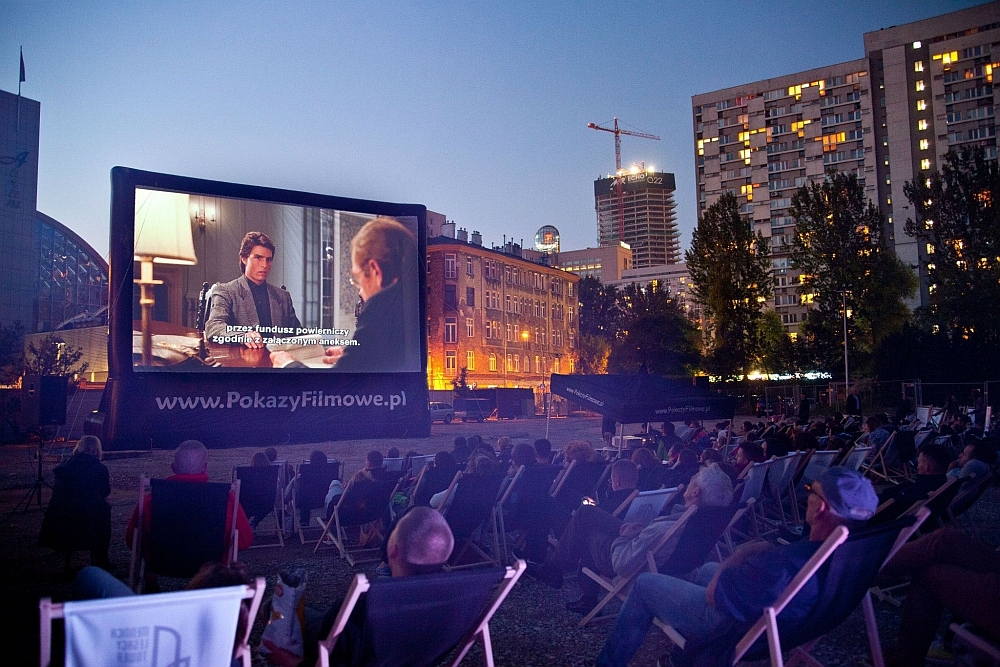 Space between the Mennica Legacy Tower buildings will become a public square with landscape architecture and greenery. Yet before the construction works begin, the investors decided to make their space available to cultural activities addressed to their closest neighbours and residents. For several weeks now the area has housed the Filmowa Stolica Lata open-air cinema, and the next event to begin soon is an outdoor exhibition organised with the Museum of Wola.

Hoping to raise the appeal of this part of Mirów part of Wola, Golub GetHouse and Mennica Polska S.A. — the investors of Mennica Legacy Tower — tidied up and opened a part of the area at the intersection of Prosta and Żelazna Streets, where numerous attractions are organised above all for the local community.

In the middle of August an outdoor exhibition entitled “New Varsovians. The history of social advancement in the second half of the 19th century” will be opened in the development’s area. The exhibition, organised jointly by the Museum of Wola and Mennica Legacy Tower investors, is devoted to people whose fortunes have become the basis of a story of the city’s modernisation and of social change. The curator of the exhibition is Joanna Kubicka.

“The exhibition about the new Varsovians tells stories of people who achieved success thanks to their own hard work, opening their own business or becoming involved in the city life. Now, Mennica Legacy Tower is also an investment embodied by the people behind it: experienced entrepreneurs, developers and architects,” commented Czarek Jarząbek, CEO of Golub GetHouse. “The cooperation with a thriving institution that is active in the district where we, too, are involved, was a natural step for us to take,” added Mr Jarząbek.

The outdoor exhibition at the site of Mennica Legacy Tower is part of the “New Varsovians. Update” Festival, which is a new project run by the Białołęka Culture Centre, the Museum of Wola, a division of the Museum of Warsaw, the City of Warsaw and the Działdowska Community Centre.

“Warsaw has profited from its inclusivity and openness for over 150 years. It is these values that constitute our point of departure when reinterpreting the identity of the modern Varsovian,” explained Hanna Nowak-Radziejowska, the manager of the Museum of Wola and the Festival’s curator. “We follow the urbanisation processes and the changes they bring about on various levels: city culture, architecture and social life. The aim of the festival is to open a discussion on the identity of the modern Warsaw resident in the context of these forces. We want to consider the identity of Warsaw as an open city, a city of newcomers, who have been one of the drives of development since the Industrial Revolution in the 19th century,” added Ms Nowak-Radziejowska.

At the same place, before end of June, a series of 10 outdoor film screenings began on Friday evenings. The screenings are going to take place until the end of the summer holidays. Amateurs of open-air cinema, which has been organised in cooperation with Filmowa Stolica Lata, will have sunbeds, blankets, bicycle racks and food trucks at their disposal.

The cultural events on the site of Mennica Legacy Tower are organised under the honorary patronage of the Mayor of Warsaw’s District Wola.

“Such initiatives bring obvious benefits to our inhabitants. I am very happy that private investors become involved in the organisation of social activities. This is a good sign for the future, especially since the city centre keeps expanding in the direction of Wola. When planning their investments, the investors do not forget about our residents and take care to create friendly public space, which may be used, for example, to organise cultural activities in the future,” said Krzysztof Strzałkowski, the Mayor of Wola.

The “New Varsavians. Update” Festival consists of three pillars: social animations “Warsaw from Within”, taking place July through October 2015 in Wola and Białołęka, artistic activities (September and October 2015) as well as debates, discussion panels and a scientific conference (October through December 2015). The diverse, interdisciplinary activities included in the Festival’s programme constitute an attempt to face the identity of the capital, the expectations of its inhabitants and strangers; they entail a critical reflection on the changes taking place in modern Warsaw.