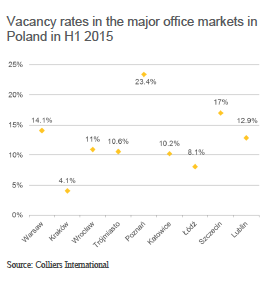 Around 1.2 million sqm of new modern office space is currently under construction in Poland. The highest level of development activity is registered in Warsaw, Kraków, Wrocław and Tricity. Although the overall vacancy rate in Poland recorded a slight increase to 12.9 percent, against 12.4 percent at the end of 2014, the largest developers are planning to remain the high level of activity – informs the latest report by Colliers International summarizing the office market in the first half of 2015.

In H1 2015, the volume of transactions amounted to 621,700 sqm (+38 percent yoy). The demand structure was dominated by new contracts (64.9 percent) and renegotiations and renewals of existing contracts (23.4 percent). Pre-let agreements continued to represent a significant part of market activity (23 percent).

Base and effective rates are stabilising slowly. The average base rents in Warsaw varied from €11 to €24/sqm per month, while in regional cities rents ranged between €10 and €15.5/sqm per month.

From the beginning of the year, the Warsaw office market increased by 147,000 sqm. Nearly 80 percent of new space was completed in non-central locations, including schemes such as: Postępu 14, Nestle House, Park Development II and Karolkowa Business Park. In the city centre two office buildings were delivered: Carpathia Office House and Spectrum Tower (renovation).

Among the regional cities, most new office space was completed in Wrocław (50,900 sqm), Poznań (48,400 sqm) and Tricity (31,700 sqm). Moderate increases were recorded in Łódź and Szczecin. Single office buildings were delivered to the market in Kraków (Bonarka 4 Business E) Katowice (A4 Business Park II) and Lublin (Center Park Offices).

Gross demand in Warsaw reached the level of 386,000 sqm, which is about half more than in the same period in 2014. The highest level of tenant activity was observed in sectors such as: financial, IT and professional services.

The trend of consolidation and relocation to new facilities is still being observed, both in Warsaw and in major regional markets.

“More demanding requirements regarding financing may translate into a reduction in the number of new projects or delaying them. Developers who already delivered successful office projects to the market are more privileged as they are trusted partners of the financing institutions and tenants. That is why the biggest developers in the market announced speculative starts for their schemes,” said Paweł Skałba, Partner and Director of the Office Agency at Colliers International.

“Companies in the business services sector will continue their expansion in regional cities. However, it is worth noting that BPO/SSC tenants are looking increasingly favourably at the Warsaw market,” added Paweł Skałba.