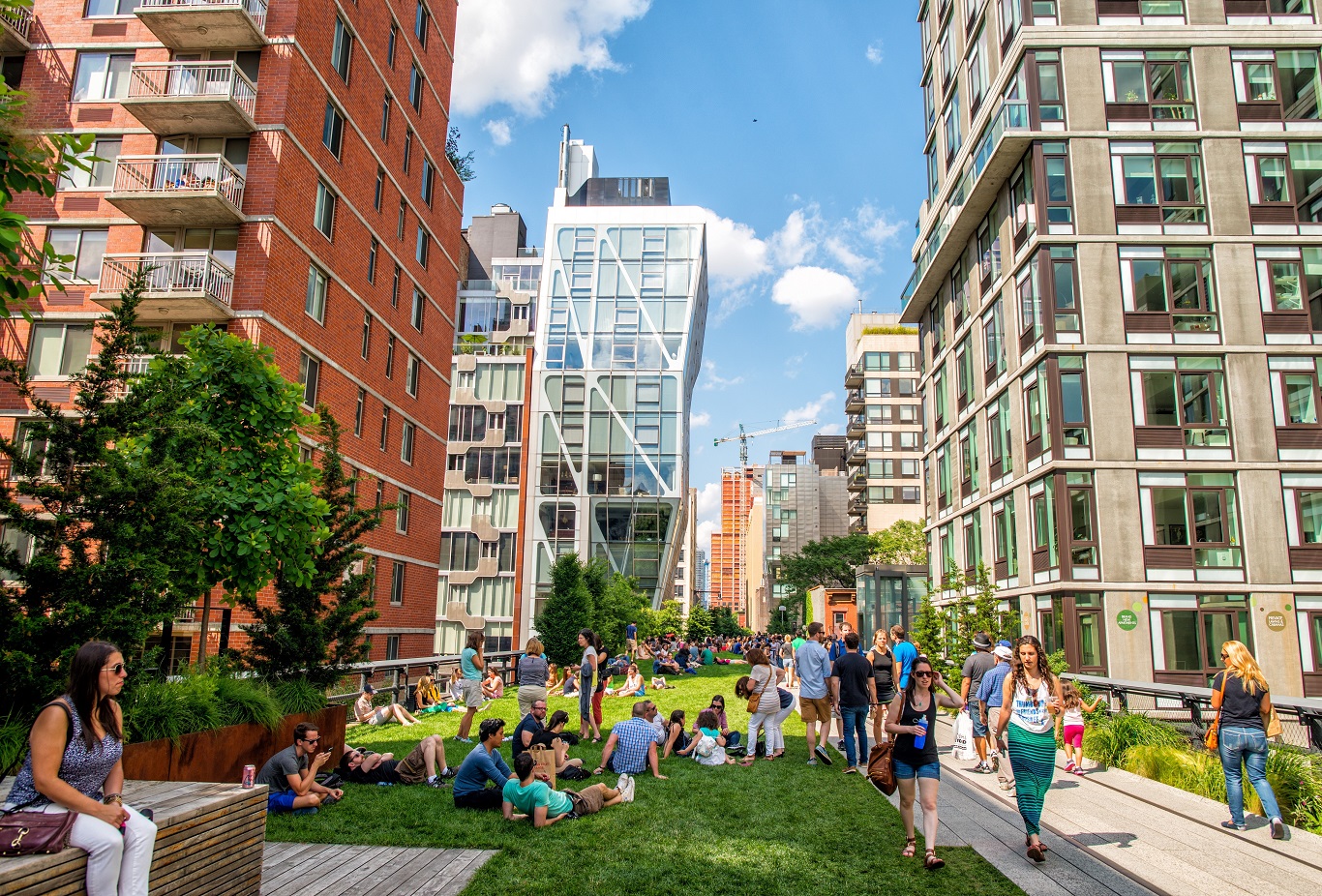 The idea of placemaking is not new, but it still inspires. At its centre are community leaders, urban movements, architects, developers and local government. However, we all benefit.

The way we design our towns and cities, shape public space and arrange buildings has a significant impact on how we feel and behave. These were the conclusions reached by Charles Montgomery, an urban planner and author of the ‘Happy City’ concept as well as books under this title. He describes the phenomenon of placemaking – an idea that has grown into a trend in Poland in recent years.

Placemaking is based on the belief that places serve people, not the other way around, and they should therefore meet their needs as much as possible. The term became popular in the mid-1990s by the Project for Public Spaces studio in New York, but the roots of this inclusive, user-centred approach go much deeper.

The precursors of placemaking are journalist and urban activist Jane Jacobs and urban planner William H. Whyte, who in the 1960s said that cities should be designed with people’s needs in mind, not cars. What sounds like a truism today was almost subversive over 50 years ago.

“Institutionalized spatial planning processes were the domain of authorities and specialists with diplomas from technical universities, operating within the narrow limits of their competences. These professionals, however, often remained helpless in the face of both micro and macro-scale problems such as congested streets, deserted parks or badly planned developments. In such cases, the idea of placemaking posited that a consultative voice and initiative had to be given to those with the greatest interest, i.e. local communities. No company, developer or architect is able to implement placemaking strategies well without involving the people who use the space in the creation process,” notes Marta Machus-Burek, senior partner, director of the Retail Agency at Colliers International.

“New technologies and the sharing economy, which have influenced the way we live, have played an important role in changing the perception of space. Fascination with cities and how we spend our free time mean that our expectations have also grown. In turn, universal access to the Internet and the movement of many processes related to the design and arrangement of public space online mean that today we can all easily and actively be involved. A good example is participation in public consultations or submitting applications for local plans or participatory budgets – all this is done today via the Internet, without complicated formalities,” says Dorota Wysokińska-Kuzdra, chairperson of the Polish branch of the Urban Land Institute.

“Placemaking is a continuous process that is not only about designing and building public space, but also its continuous improvement. It requires conscious leaders able to manage it properly and make it lively and attractive to the local community. An increasing number of commercial projects are appearing in Poland that are creating attractive spaces. They often cover entire quarters or large fragments of streets. Good examples in Warsaw are Hala Koszyki, Warsaw Spire with Plac Europejski and Koneser. Their developers not only gave these places a new shape and functions, but they have also brought them to life by organising various attractions for local communities. A similar idea is guiding investors who are building or planning projects such as Browary Warszawskie, Towarowa 22 and Elektrownia Powiśle. Such investments are the most city-forming,” adds Dorota Wysokińska-Kuzdra.

Learn from the best

Thousands of examples from around the world prove that the concept initiated in the 1960s in the United States is effective. High Line Park in New York built on the viaduct of an unused railway line running along the west side of Manhattan has become an icon. The history of the park goes back to 1999, when a plan to demolish the historic structure provoked two New Yorkers to form the High Line Friends group to express their objection. They shared their enthusiasm with other local people who supported the project, sponsors who offered funds for the conservation of the structure and local artists who became ambassadors of the initiative.

“Today, the green walkway is a landmark in New York and it attracts millions of tourists every year. Restaurants, hotels and above all residential buildings are being built near High Line. Equally important, however, are the intangible benefits of this grassroots initiative – New Yorkers together created a unique place where they can meet and relax in green suroundings. This paved the way for similar activities around the world,” notes Marta Machus-Burek.

Another spectacular example of placemaking is the Superkilen project in the capital of Denmark implemented by a team of architects from the Superflex, BIG and Topotek1 studios. In place of an amorphous, degraded space, coherently designed squares and a park with an unusual, innovative form were created. The aim of the project was to revitalise a fragment of the multicultural Norrebro district so that it reflects the identity of all the communities living in it. Importantly, residents took part in designing the space, and the architects took into account all their wishes and suggestions. This approach has produced street furniture and architectural elements inspired by the culture of over 60 nationalities who live in that part of Copenhagen. It includes Brazilian bar stools, a Moroccan fountain, Turkish benches, Japanese cherry blossoms, a Ukrainian slide, Argentinean barbecue tables, Dutch bicycle racks and Polish (or more precisely Gdansk) manhole covers.

Placemaking activities are carried out not only by city residents, NGOs and local authorities, but also by development companies. “Increasingly, they have the ambition to create valuable urban spaces, taking care of their image as socially responsible companies and creators of attractive places of work and rest that go beyond the walls of buildings. The idea of placemaking should also be adopted by consulting companies in the real estate sector, which, by advising clients, can influence the shape of urban space around buildings. That is why we cooperate with the Urban Land Institute, a global non-profit organisation that undertakes urban space research and education in this field,” says Paweł Proński, associate director from the Office Agency at Colliers International.

In Poland, it is still difficult to find excellent examples of placemaking. The Nowa Towarowa project initiated by Ghelamco and Skanska in which inhabitants, city activists and Warsaw authorities were involved has great potential. Unfortunately, it has still not been carried out. In the capital, though, we have interesting examples of the creation of attractive public space by developers, which is then used to activate the local community and implement placemaking initiatives. One of them is Plac Europejski next to the Warsaw Spire office complex. A large, attractively arranged city square with fountains, greenery and an outdoor art gallery has been created there, where the developer organises cultural, sporting and artistic events throughout the year. Other interesting projects include Plac CytryNowy at the Spark office building, and the space in front of Mennica Legacy Tower, which is being built nearby at the intersection of Prosta and Żelazna streets. A good example on the right bank of the Vistula is Koneser in Praga. In addition to well-designed public spaces and revitalised historic buildings, it offers residents numerous cultural events, including cinema Tuesdays, literary Wednesdays and jazz Thursdays.

“Shopping centre owners also see the power of placemaking. It is alongside this type of development that the most interesting spaces are being created today, for example public squares with good design, filled with additional attractions such as play areas, outdoor cafes, fountains and seasonal markets,” says Marta Machus-Burek. “However, it should be noted that many owners don’t include users when planning placemaking strategies. They implement their own designs for public spaces, not making full use of placemaking, but only one element of it. The potential of a place increases significantly if the people who use it take part in its creation, not just architects and designers,” the Colliers International specialist adds.

The Towarowa 22 development designed by the famous Danish BIG studio is raising the bar in this regard. Public space will intertwine with buildings of various functions: retail, office and residential, which will be connected by a network of passages. The developer’s ambition and plan is to create a network of pavements and streets connecting the project with the revitalised parts of Wola to ensure a natural circulation of pedestrian traffic. The development, in conjunction with the revitalisation of the Former Norblin Factory, Browary Warszawskie and Plac Europiejski will create a completely new quality of public space in Wola, making it a place where residents and visitors to the district will want to spend time.

Galeria Wilanów is an example of the fact that the local community in Poland wants to be active and decide jointly on the quality of the space in which it lives. After protests and pressure from residents, its developer has come up with a completely new design. Instead of one large-scale structure, a complex of four retail buildings submerged in greenery will be connected to each other by pedestrian galleries and will have access to a park.

“Important and beautiful spaces have always been created in European cities. The agora in Greece, the forum in Rome and the medieval market square with its town hall were all attractive places where people lived their lives. That is why for me placemaking is simply an attempt to return to the European tradition of thinking about the city as a place for social life. It is good that investors are beginning to notice this aspect. But to achieve success, the actions of individual developers are not enough. Cities should develop a vision of shaping and developing public spaces, involving urban planners and residents in this process, and coordinating the actions of investors by using their potential,” says Krzysztof Domaradzki, architect and urban planner, author of completed concepts for the reconstruction of Nowy Świat and Krakowskie Przedmieście streets and numerous spatial development plans in Warsaw.