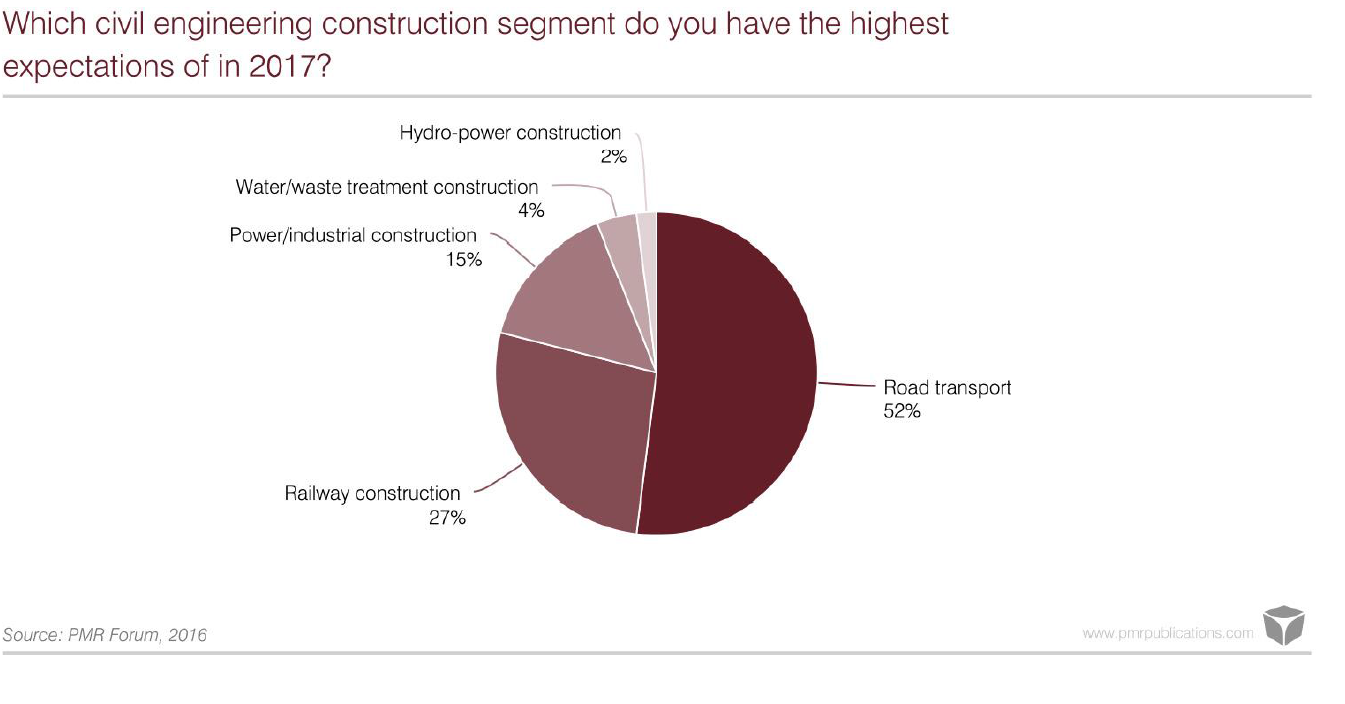 The construction industry has seen more than a few surprises since the beginning of the year. The first PMR Forum of the Construction Market in Poland 2017, which was held at the Airport Okecie Hotel in Warsaw, was an excellent opportunity for participants to voice their opinions on the current situation and trends in the construction sector and to share plans and forecasts for the coming years.

The event was attended by over 100 executives of contractors, property developers, manufacturers of building materials, distributors of building materials and banks. Despite a standstill in announcing tenders and awarding contracts for large-scale infrastructure projects and a slowdown in projects conducted by the local authorities, the interviews and polls we conducted with conference participants suggest that sentiment among construction is not as bleak as one would expect based on an analysis of data on construction and assembly output in the recent months that is compiled by the Central Statistical Office of Poland (GUS). The Forum coincided with the release of the latest edition of PMR’s report Construction sector in Poland, H2 2016 – Market analysis and development forecasts for 2016-2021. Bartlomiej Sosna, PMR’s Head Construction Market Analyst, and Michal Bundyra, Econometrician at PMR, shared the latest information on the development of the construction sector with Forum attendees.

The main problems currently faced by the construction industry, pointed out by contractors during the panel discussion, include in particular lower a number of tenders for large-scale infrastructural projects and fewer projects carried out by the local self-governments. To adjust to the difficult market conditions, this year companies had to implement slight modifications to their development strategies, structure of order books, and in some cases their employment policies. According to a statement by Boguslaw Wroblewski, CFO at Strabag, the company intends to double its share in the building construction sector, in particular in the residential construction market, but more as a contractor than as a developer. Nonetheless, Strabag also wants to complete orders in the segment of industrial and public utility buildings as well as hydrotechnical construction projects. As stated by Pawel Machnicki, Deputy CEO at Skanska, the contractor, whose current order book consists of approximately 50 percent infrastructure projects and 50 percent building construction projects, intends to increase its focus on acquiring large-scale contracts with a continued involvement in the public sector. In turn, Erbud represented by Jozef Adam Zubelewicz, Member of the Management Board, still focuses on acquiring orders in the building construction segment. Residential construction represents approximately 15 percent of the company’s order book, while public sector projects comprise less than 20 percent of its total orders. Erbud diversifies its operations by continued presence in foreign markets, which for now cover mainly Western Europe. As stated by Mariusz Jedrzejczyk, Head of the Krakow Hochtief Branch, the company does not implement any engineering projects and focuses on residential, office and industrial construction projects. Orders from public sector entities represent approximately 15-20 percent of its order book.

Apart from Skanska, which this year decided to trim headcount by approximately 12 percent, the contractors taking part in the panel discussion do not plan any job cuts. Strabag carried out a staff restructuring process in 2012-2013 and since then its headcount has remained stable. No further changes should be expected in that area in 2017. Erbud, which currently employs approximately 2,000 staff, intends to increase the number of construction supervisors.

During the discussion on the financing chain, the representatives of Strabag and Skanska did not mention any material problems with payments of amounts due to contractors by investors. However, Jozef Zubelewicz pointed to the often prolonged process of final settlement of the entire project by investors, which does not present a great difficulty to large companies but may have an adverse effect on the condition of smaller contractors. Mariusz Jedrzejczyk stated that effective dispute resolution is often hindered by issues of structural nature, including ineffective judiciary and badly drafted contracts.

As regards the assessment of the effect of the change of government, which occurred a year ago, on the conditions in the construction market, the panellists indicated delays in infrastructure projects, in particular railway and power engineering projects, as well as numerous changes in law. Moreover, Mariusz Jedrzejczyk stated that the slowdown in the infrastructure segment leads to intensified competition between contractors seeking to acquire orders in the building construction segment.

The representatives of the contractors participating in the discussion have not yet observed the effect of entry into force of the amended Public Procurement Law (effective as of July 2016) on the contract award process. According to Jozef Zubelewicz, if the currently prohibited technical dialogue would be allowed, the price would not be a problem. According to Pawel Machnicki, the changes in the Public Procurement Law are a step in the right direction, but establishing selection criteria based on factors other than price is not an easy task and it requires education and promotion. The changes in law of particular relevance to the construction industry, including changes related to the new Urban Construction Code, Act on Trade in Agricultural Land, and the consequences of limiting the investor’s several liability for payment of consideration to subcontractors in the bill on amendments to the Civil Code put forward by the Senate, were assessed by Konrad Marciniuk, PhD, Legal Counsel representing the Law Firm of Miller Canfield.

As regards material external economic and political factors that may affect the Polish market in the next few years, PMR asked the forum participants about their expectations concerning the effect of Brexit on Polish economy in 2017. 43 percent of the respondents stated that the effect would be moderate, 30 percent – small, 12 percent – strong, 11 percent – very small, and 4 percent – very strong.

The level of optimism among the participants of the panel discussion for financial institutions, moderated by Radoslaw Gorecki, Communication Manager at Ghelamco Poland, was very diverse. Anna Glanowska-Szpor, Construction Sector Managing Director at ING Bank Slaski, stated that 2017 and 2018 should see growth in the construction industry. According to Piotr Okonski, Head of Construction and Property Financing, Strategic Customers Department at PKO Bank Polski, the slowdown in the construction industry is noticeable, albeit temporary, and a rebound in capital outlays should be expected. Moreover, the lower number of public sector projects has been offset by investment in the residential construction market. According to Roman Nagler, Sector Credit Director at Bank Zachodni WBK, market sentiment has worsened in the wake of weak construction data published by the Central Statistical Office (GUS). He expects that investments will improve, but the key issue is project profitability, given that BZ WBK has negative experience in that area from the previous investment boom. The risk inherent in construction projects is still higher than the average in the economy. Michal Sternicki, General Director of Aareal Bank – Polish Branch, was also far from being optimistic as he pointed to NBP data on falling investment, in particular in the private sector. Michal Sternicki believes the large uncertainty of future business environment in Poland (including the taxation of the retail and banking sector) makes private investors put new investment projects on hold in anticipation of improvement in market conditions.

The issues raised by distributors in the relevant panel discussion moderated by Anna Wronska, Editor-in-Chief of Murator, included the different approaches to the analysis of indicators concerning single-family houses and multi-family residential buildings. Miroslaw Lubarski, Member of the Management Board, Marketing and Exports Director at Grupa PSB, pointed to the fact that in the case of building permits issued in the development segment the investment process is much better synchronised than in the segment of individual investors, which is more unpredictable. Miroslaw Lubarski also said that the floor area of apartments completed or under construction was a more important factor than the number of units completed or under construction in the context of production and distribution of construction materials.

The panellists were in agreement that individual investors have become better informed with respect to the purchasing of construction materials. Michal Jakubowski, Managing Director representing Tadmar/Saint-Gobain Polska, stated that the role of individual customers in the selection of technology and producer had increased, when previously decisions in that area had been made mainly by contractors. In their preferences, key factors driving customers are not only the brand and price, but also environmental friendliness and energy-saving performance. Marcin Szczygiel, President of the Management Board of SIG, also raised the issue of still relatively low innovativeness of the construction industry, which, according to him, may improve thanks to online sales. According to Miroslaw Lubarski, the importance of e-commerce may increase but mostly in the case of interior finishing and decoration materials. He added that for the time being he did not imagine that in the case of construction materials online sales could replace traditional sales channels. Micha Jakubowski estimated the share of e-commerce in the construction market at approximately 2.5–3 percent, but in the case of bathroom products and heating equipment the share was much higher.

The panellists also discussed the effect of the government Family 500+ child benefit programme on the distributors of construction materials. Most of them stated that it would not be significant since the allowance offered by the government to the families is not sufficient to efficiently encourage people to renovate their homes. However, one effect of the programme which has become noticeable is that part of employees of construction material distributors decide to quit their jobs.

Another issue raised was the effect of the Flat+ government-led housing programme on the construction materials market. There are still too many uncertainties concerning implementation of the programme to assess its potential impact, according to Szymon Jungiewicz, Head of the Research and Analysis Department at Grupa Emmerson. However, in the near future it will not have a significant bearing on the residential market.

The Forum participants also had the opportunity to learn about the advantages of using the BIM technology, presented by Jakub Kulig, BIM Project Manager representing Robobat Polska – Graitec Group. The development of concrete roads in Poland and their investment potential was presented by Michal Hebdas, Commercial Officer at Cemex Infrastructura. During the event, interesting discussions were held not only in the plenary room and during the discussion panels with invited guests, but also on the sidelines.