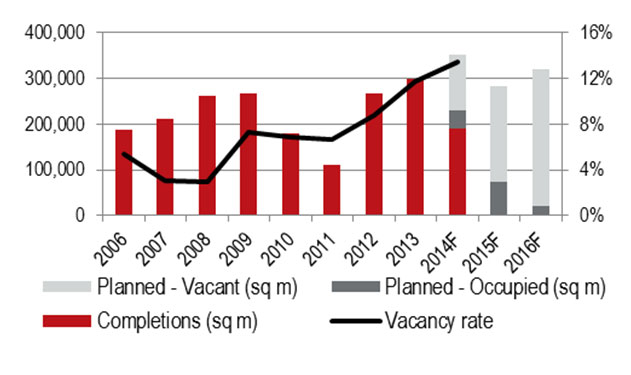 Over 1.1 million sqm is currently under construction in Poland. The most active markets in terms of office space in the pipeline are Warsaw, Kraków, Wrocław and Tri-City. Refurbishment trends are gaining pace in Warsaw, summarized JLL in its latest report on Q2 2014, analyzing key trends on Poland’s office market.

Mateusz Polkowski, Associate Director, Research and Consultancy, JLL, said: “Construction activity in Warsaw remains high. Currently, around 579,000 sqm is under active construction, and an additional 62,000 sqm is under refurbishment. Remodeled and renovated buildings account for around 10 percent of the developed office space in Poland’s capital city. We think that the trend of older buildings being refurbished and tailored to market needs and expectations will continue. In 2014, a total of ca 350,000 sqm of new offices will be completed, including the above-mentioned refurbishments. The Warsaw market will roughly maintain its current pace in 2015 and 2016 with ca 300,000 sqm of new supply being completed for each of these two years. The volume of new office projects will be reflected in the continued upward pressure on the vacancy rates. We expect that in 2016 the total office stock in Warsaw will hit 5 million sqm.”

In H1, 189,000 sqm of modern office space was leased in office markets outside Warsaw (90,600 sqm in Q2 alone). The biggest transactions in Q2 were signed by UPC (renewal of 6,500 sqm in Green Park, Katowice), IT company (5,600 sqm expansion in Enterprise Park C, Kraków) and a bank (renewal of almost 5,000 sqm in Silver Forum, Wrocław). The largest change was observed in Łódź, where gross take-up amounted to 14,200 sqm. As the gross take-up in Łódź over the last two years has hovered around an average of 5,800 sqm per quarter, this means that H1 2014 demand has already hit 85 percent of 2013’s total. In Q2 the most active market in terms of tenant demand was Katowice (22,000 sqm of leased space).

In H1, 190,300 sqm of office space was commissioned in Warsaw. In Q2 alone, around 106,000 sqm was delivered to the market, with the largest office building completions being Eurocentrum Office Complex I (38,700 sqm), GreenWings (10,800 sqm) and Gdański Business Center 1-A (29,600 sqm). Non-Central stock exceeded 3 million sqm of existing modern office space.

The vacancy rate in Warsaw went up slightly comparing to the end of 2013 when it stood at 11,8 percent. At the moment 13.4 percent (574,400 sqm) of Warsaw’s modern office stock remains vacant (13.6 percent in Central Warsaw, 13.3 percent in Non-Central locations).

Quarterly vacancy rates were stable at the end of H1 2014 in major cities outside Warsaw. The lowest vacancy rate is still found in Kraków (4.5 percent) and the highest in Szczecin (24.4 percent). The largest decrease compared to the end of 2013 was recorded in Łódź (from 13.4 percent to 9.2 percent).

“We expect that the vast majority of office markets in Poland will remain favorable to tenants. The situation will be more balanced in those markets characterized by stable demand for office space and relatively low vacancy rates,” Mateusz Polkowski summarized.