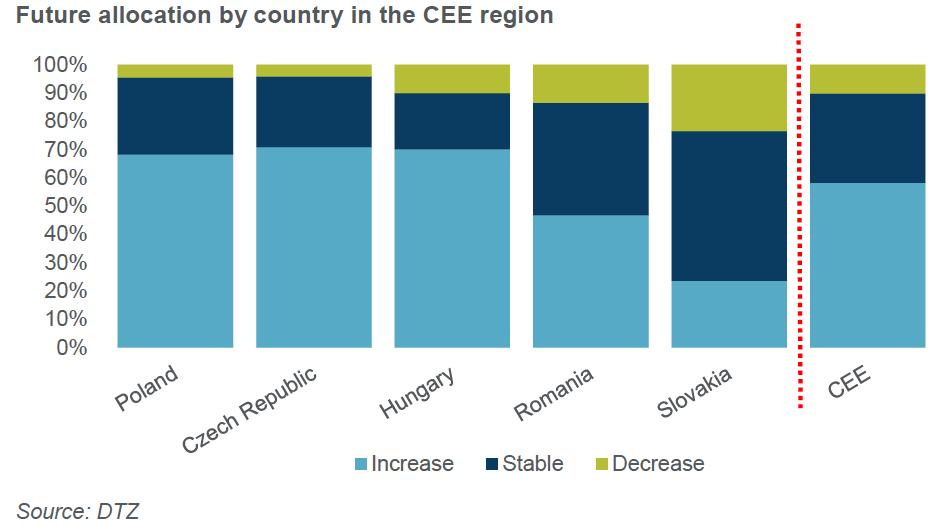 According to a research paper published by DTZ entitled CEE Investor Survey, investors are positive towards commercial real estate in Central and Eastern Europe, i.e. Poland, Czech Republic, Romania, Slovakia and Hungary. The Polish office market is preferred by investors, followed by the Czech and Polish retail space markets.

In the 12 months ahead, 74 percent of investors expect further allocation of capital to commercial real estate in Central and Eastern Europe compared with 72 percent six months ago, driven by a decrease in yield and vacancy rates. 23 percent of investors believe that the value of their portfolio will remain unchanged, and 3 percent predict a decrease in their portfolios’ value.

“In the coming twelve months we foresee that the largest expansion in Central and Eastern Europe will be in Poland and the Czech Republic, where around 70 percent of investors surveyed by us are looking to acquire assets in these countries’ retail and office markets. They are particularly interested in opportunistic and value added investments, as well as in the core segment,” said Łukasz Maciak, Capital Markets Director, DTZ.

Half of the respondents expect an improvement in terms of financing conditions in the region, compared with 66 percent a year ago. 47 percent of respondents indicated they do not expect a change, which in many instances could be associated with interest rates being at historical lows.

Approximately 60 percent of the investors interviewed anticipate a decrease in prime retail yields on the Polish market, whereas 20 percent expect it to remain unchanged, and 10 percent foresee an increase.

Overpriced property is considered to be the main risk on the Polish market. As far as the Czech Republic, Slovakia and Romania are concerned, respondents revealed that they are wary of a lack of suitable investment product. Economic and political risks and concerns over an insufficient supply of attractive assets weigh heavy in Hungary.

The research on which this paper is based has been conducted by DTZ between April and June 2015, among investors who are active on the property market in Central and Eastern Europe, Germany, Austria, United Kingdom, France and Spain.