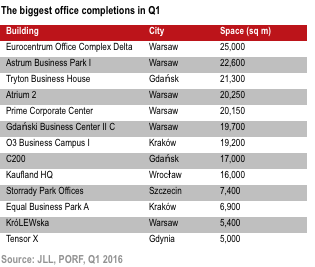 There is around 1.5 million sqm of office space under development throughout Poland. Developer activity in Krakow at historic high – over 280,000 sqm of offices under construction, summarized advisory firm JLL on the situation of the office markets in Warsaw and other major Polish cities at the end of Q12016.

Anna Młyniec, Head of Office Agency and Tenant Representation at JLL, commented: “In Poland, office lease agreements for a total of 250,400 sqm were signed in Q1 2016. Major office markets outside Warsaw accounted for 108,200 sqm of this number. The highest take-up was recorded in Warsaw – 142,200 sqm, followed by Kraków with 39,400 sqm. We expect an increase in tenant activity in the upcoming months.”

“The modern business services sector remains a key office tenant on major Polish regional markets, accounting for approx. 63 percent of demand registered outside Warsaw in Q1 2016. In Wrocław, companies from the sector accounted for 83 percent of the city’s quarterly office take-up, in Katowice – 81 percent and in Kraków – 74 percent,” added Anna Młyniec.

“Currently, there is approx. 1.5 million sq m of office space under construction throughout Poland. The largest developer activity is in Warsaw, where 662,000 sqm is under construction, followed by Kraków – 284,000 sqm, Wrocław – 170,000 sq m and Łódź – 106,000 sqm. According to our preliminary forecasts, the Polish office market is likely to grow by 900,000 sqm in 2016,” said Mateusz Polkowski, Associate Director, Research and Consulting, JLL.

Vacancy rate in Warsaw was 14.1 percent by the end of Q1 2016. Outside Warsaw, the lowest vacancy rate was registered in Kraków (5.7 percent) while the highest was recorded in Szczecin (18.3 percent).