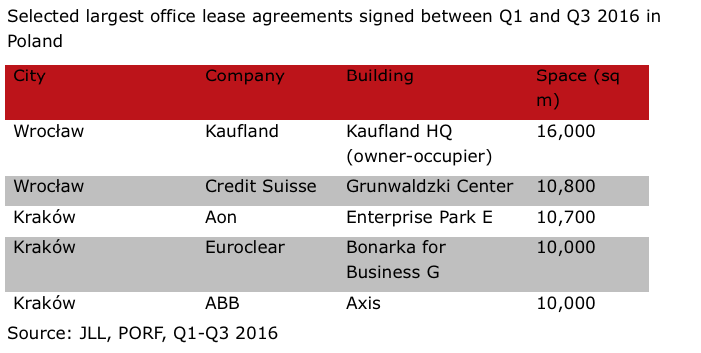 Over 691,000 sqm of office space has been delivered to market since the beginning of 2016. A further 1.43 million sqm remains under development. Tenants continued to be active – companies signed lease agreements for nearly 933,000 sqm, according to JLL summarizing the situation on the office markets in Warsaw and the eight other major Polish cities.

“Demand for modern office space in Poland continues to be strong. In total, lease agreements for 932,700 sqm were signed between Q1 and Q3 in Warsaw and other major cities. Warsaw accounted for 530,700 sqm, while regional cities came in with 402,000 sqm. What is interesting is the fact that between Q1 and Q3 none of the lease deals signed in Warsaw exceeded 10,000 sqm of space, and much larger lease agreements were concluded in regional cities,” said Mateusz Polkowski, Head of Research and Consulting, JLL.

“In terms of office markets outside Warsaw, the highest tenant activity was recorded in Kraków – 149,750 sqm, and Wrocław – 78,850 sqm. Both cities were at the forefront of occupier activity and together accounted for 56 percent of total demand registered in regional markets. It is worth pointing out that take-up within these two cities was largely driven by pre-letting activity (nearly 40 percent of the total volume), which has prompted developers to increase construction activity, especially in Kraków,” commented Karol Patynowski, Director, Regional Markets, JLL.

In total, over 691,000 sqm of office space was delivered to market between Q1 and Q3 in Warsaw and eight other major cities in Poland. Warsaw alone accounted for nearly 391,000 sqm of this total, while regional cities outside Warsaw accounted for 312,500 sqm. Excluding Warsaw, the largest amount of office space was completed in Kraków – accounting for up to 32 percent of overall space delivered to Poland’s regional cities between Q1 and Q3. The largest Q1-Q3 openings outside Warsaw included: Tryton Business House in Gdańsk, O3 Business Campus in Kraków and University Business Park B in Łódź. The biggest project completed since the beginning of 2016 in Warsaw was Warsaw Spire A.

“By the end of Q3, around 1.43 million sqm of modern office space remained under construction in Poland. The major regional cities outside Warsaw accounted for 879,000 sqm. High developer activity was recorded in Kraków – 272,900 sqm and Wrocław – 215,850 sqm. Both cities maintain their lead in this respect, and account for around 55 percent of this pipeline outside Warsaw,” said Mateusz Polkowski.

In Warsaw, around 550,000 sqm of office space remains under construction.

The vacancy rate in Warsaw stood at 14.6 percent. Outside Warsaw, the lowest vacancy rate was recorded in Kraków (6.3 percent) while the highest was in Katowice (15.5 percent). It is worth noting the drop of vacancy rates in Szczecin, with a downward shift from 17.7 percent in H1 2016 to 14.7 percent by the end of September 2016.

Between Q1 and Q3 2016, JLL’s team of experts advised on office lease transactions for over 200,000 sqm of space throughout Poland, accounting for a 27 percent market share, the highest result among advisory companies.