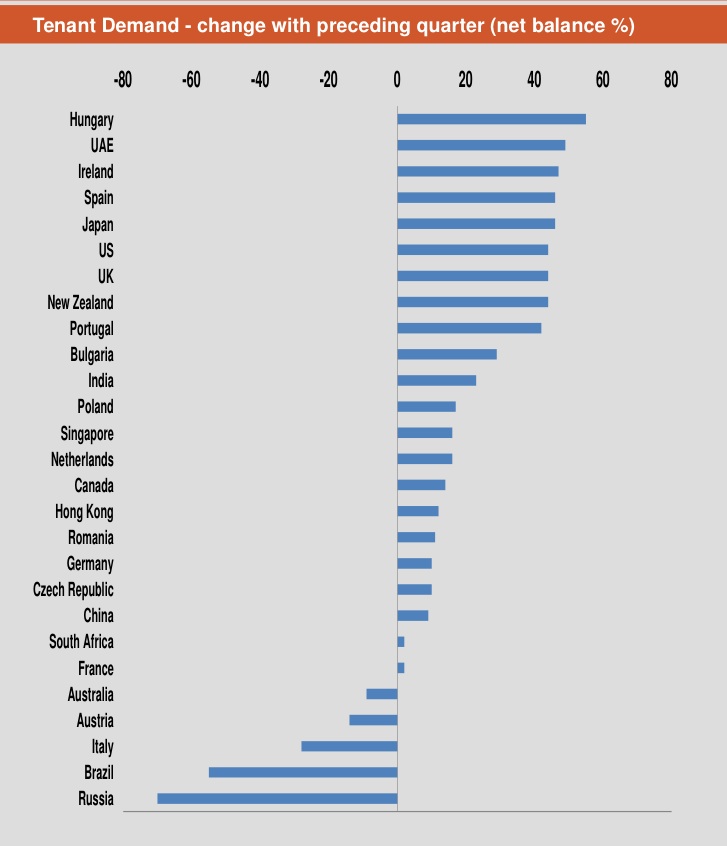 Despite the recent turmoil in financial markets, key indicators of sentiment for the global real estate market continue to improve, according to the RICS Commercial Property Monitor Q3 2014 for the third-quarter (Q3) of 2014.

Japan, the UK and New Zealand are seeing increasingly positive momentum while some peripheral European markets, those worst hit by the 2008 financial crisis, have also seen a meaningful lift in overall market confidence.

In Europe, Hungary in particular saw solid momentum, especially on the occupier side, with increased demand in the rental market leading to significant upward pressure on rent expectations for the next 12 months. This is likely due to the sharp rise in employment numbers witnessed during the first half of 2014.

Russia has seen sentiment weaken due to, what some respondents note, sanctions affecting business and some predicted more sanctions to come.

In Germany, as with the rest of the euro area, economic momentum is lacking and the uncertainty created by EU sanctions on Russia appears to have added another downside risk to the growth outlook. Nonetheless, the labour market remains strong and this is supporting prospects for solid rental value growth over the year ahead. Meanwhile, commercial property investors seem undeterred by the slightly fragile macro backdrop with buyer demand rising at an accelerating pace in Q3 and ensuring the prospects for capital values stay robust.

In other parts of Europe, some markets worst hit by the 2008 financial crisis continue to recover as is reflected in the growth in occupier demand and investor interest. Portugal, Spain and Ireland have seen confidence return since 2013, a trend that seems to be establishing itself going forward. This upward trend is expected to continue to support the outlook for rents and commercial property prices over the medium term. The United Kingdom has seen strong sentiment, in keeping with year on year gross domestic product (GDP) growth of over 3 percent in both markets.

In line with trends reported over the past 6 quarters, forward looking sentiment indicators suggest that Japan will continue to see strong upward momentum in the investor and occupier markets, especially over the next 12 months. These strong expectations are being driven by the current upbeat tone to market conditions.

The emerging markets of Brazil, Russia, India, China and South Africa (BRICS) present a varied picture, with India leading on market sentiment with sizable gains projected for rents and commercial property prices of around 10 percent per annum over the next three years. One factor is the Indian government’s recent approval of Real Estate Investment Trusts (REITs), with expectations among the Indian survey sample that this development could see funding for commercial real estate sector improve as a result.

In China, growth in supply is outstripping that of demand in both the occupier and investment sectors, an indicator that the near term outlook for rents and commercial property prices will likely be flat. Overall market sentiment remained marginally negative in the Chinese property sector for the second consecutive quarter, the first time this has occurred since 2009. South Africa demonstrates similar trends to those of China, but investor interest has seen an increase over the past three months.

In Brazil, moderating economic growth and higher interest rates appear to be taking their toll on the real estate sector with sentiment deteriorating across the board.

Of this quarter’s results, RICS Chief Economist Simon Rubinsohn, said: “The global economic recovery remains fairly fragile, despite some encouraging signs in some of the world’s economies. The results of the RICS Global Commercial Property Monitor provide some reassurance and suggest a slightly improved environment for both occupier and investment markets. Whether the more positive trend can be sustained will depend, critically, on whether the macro headwinds can be resisted.”