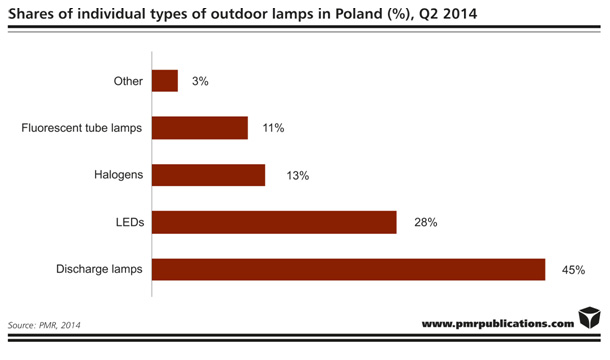 Outdoor lighting fixtures constitute a major segment of the Polish lighting market. They contribute nearly one-fourth of the professional lighting market, representing a value of about PLN 500 million a year. Costs of municipal lighting represent a significant part of local governments’ budgets. This is the reason why many of them decided to upgrade the existing infrastructure in recent years.

The value of the market of the professional lighting fixtures market is nearly PLN 2bn, with outdoor lighting representing about one-quarter of the market’s total value, according to PMR’s latest report entitled “Lighting market in Poland 2014 – Development forecasts for 2014-2019”. Discharge lighting fixtures have been the most popular outdoor lighting solution in the past two years as they accounted for 45 percent of products used. They outpaced LED lighting equipment, which has enjoyed exceptionally rapid growth and gained a 28-percent market share. Other sources indicated by contractors included halogens and fluorescent tube lamps, which had a combined share of 24 percent of the market.

A wide-margin advantage held by discharge lamps, which are, at any rate, considered to be less effective than LED lighting, consists in more affordable prices. LED bulbs remain a significantly more expensive solution, which has an adverse effect on the financial aspect of lighting projects. A large group of municipalities and communes have, in the past, decided to upgrade lighting infrastructure based on the ESCO model, where, however, they bear the investment cost of projects in the long term. The SOWA scheme, which offers non-returnable subsidies from NFOSiGW, is a much more viable path for the development of LED technologies. As a result, the municipalities and communes are able to use significantly more advanced solutions. This shift is also seen in the very projects, which obtained funding under the scheme – a large portion of them use mostly or exclusively LED lighting.

Lighting control systems steadily become a standard on roads and streets across Poland. It would appear that renewable energy could be an additional source of savings in powering public lighting systems, given current needs for energy savings and the society’s increased environmental awareness. However, the survey results show that solar-powered lamps are used only occasionally. Three out of every four contractors stated that they had never installed lamps of this type, while the balance of respondents would use RES batteries rarely or very rarely.