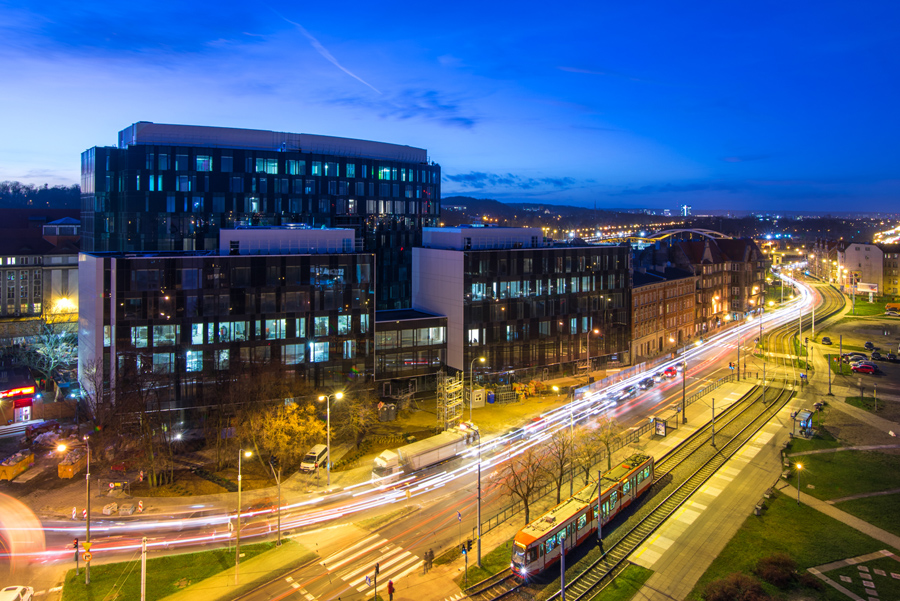 Warsaw is the largest business centre in the country and its office stock amounts to 4.6 million sqm. The city enjoys unflagging interest from tenants and developers, which was reflected in the record results in 2015. In this period, the total office stock increased by 277,000 sqm, most of which was delivered in Mokotów (46 percent) and in the central zone (21 percent). The total volume of transactions registered from January to December reached 830,000 sqm (+35 percent y-o-y). Currently, there are approximately 790,000 sqm of new office space, which will be delivered to the market within the next three years.

Investors were also active in regional cities. At the end of 2015 the total office stock totalled 341,400 sqm. It is worth mentioning that almost three times more office space was delivered to the market than in 2014. Developers completed 56,200 sqm within nine projects. Most modern office supply was delivered within one project – the Poznań Business Garden complex (40,600 sqm). A few large transactions remain under construction, including Bałtyk Tower (12,500 sqm), which is scheduled to be delivered to the market in 2017, as well as two phases of the Maraton complex (25,000 sqm). Poznań was characterized by a high level of tenant activity. Due to the high volume of transactions in Q4 2015, the level of available office space decreased and at the end of December amounted to 16.9 percent.

A similar situation can be observed in Łódź, where the vacancy rate is at its lowest level for the last eight years. Decreasing vacancies have encouraged developers to start planning new investments. Between January and December 2015, developers completed four projects totalling 20,000 sqm, among which phase II of Centrum Targowa (8,000 sqm). As a result, at the end of 2015 the Łódź market noted a record amount of square metres under construction. Currently, 94,000 sqm are under construction, of which 80 percent is located in four projects – Przystanek mBank (24,000 sqm), Nowa Fabryczna (21,500 sqm), University Business Park complex (19,200 sqm) and Symetris Business Park (9,400 sqm).

As a result, at the end of 2015 the Lublin market noted a record amount of square metres under construction. Currently, 70,500 sqm are being built constituting around 70 percent of existing supply. The record amount of office space under construction (approximately 50 percent) is located in one project – CZ Office Park (31,700 sqm) whose completion is planned for H1 2017. Tenant activity was focused mainly in small office modules. It can be assumed that due to the increase in modern office supply, market activity will grow as well.

Zielona Góra and Radom are developing markets with a relatively low level of supply growth.

The total office supply in Zielona Góra is estimated at 23,600 sqm and in Radom at a level of slightly over 22,000 sqm. Similar to other smaller cities, most of the existing supply is constituted by B/B+ class projects that are delivered by local developers. The main customers for such locations are local entrepreneurs who are searching for small modules for rent and sale. Radom Office Park (5,000 sqm) is offering the first A-class space and is a positive example of change within this trend. Companies such as: PKO BP, PGNiG, Polska Grupa Zbrojeniowa and ASSG from the shared services centre sector have opened their offices there.

The report also touches on issues related to the role of social media, which in a couple of years ceased to be just a platform to support private relationships. They have become an important tool for creating the reputation both for individuals and for companies. The most popular job-searching platforms are job posting portals (61 percent of the time the candidate spends looking for job online) and web sites of companies. However, social media are catching up fast.

“It is worth paying attention to this data when planning the recruitment strategy, because as numbers show the younger the generation the more often it uses social media. After all, the human potential in the SSC / BPO sector mainly consists of young people entering the labour market or those with short work experience,” said Joanna Kowalczyk, Permanent Placement Team Leader Construction & Property, and Adecco Poland.