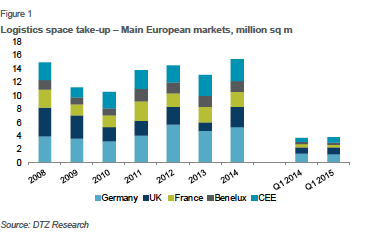 Commenting on the increase, Robert Hall, Head of EMEA Logistics at DTZ, said: “Location-wise, Germany remained the most active market in Europe in Q1 2015, with 35 percent of total occupier activity recorded in the region. The CEE region also had a strong start to the year with more than 800,000 sqm of logistics space leased, up by 32 percent in comparison with the same period a year ago.”

Marc Le Bozec, Head of Industrial & Logistics Agency at DTZ Poland, added: “In the CEE, the Polish market was the most dynamic in terms of tenant activity, with 700,000 sqm leased. New space was in highest demand in Poznań, Wrocław, and the Silesia region. We expect the volume of the lease agreements concluded in 2015 to exceed 2.5 million gross sqm.”

Industrial investment volumes in Europe reached €4.2 billion for Q1 – comparable to Q1 2014 figures, a record year for the decade. In terms of locations, the UK was the main European investment hotspot with €1.3 billion of inflows, and the largest transaction of the quarter, the acquisition of a €323 million portfolio by Cerberus Capital Management, was signed in Italy.

Magali Marton, Head of EMEA Research at DTZ, added: “Continuing the 2014 trend, international and US-based investors showed a strong interest in European industrial markets, completing almost €1 billion of the logistics assets acquisitions in the region in Q1 2015. We expect to see investor activity continuing on the buy-side as a couple of pan-European portfolios are currently on the market.”