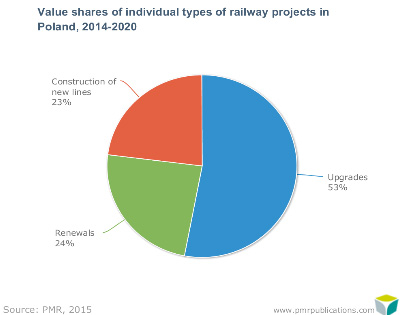 Railway construction market in Poland to top €1.4 billion in 2015 – EuropaProperty

The Polish railway construction industry faces new challenges in the new EU programming period. Although PKP PLK has not quite completed all the projects funded in the previous programming period, the time is fast nearing for the company to go ahead with tendering activity for projects which will be co-financed with funds from the 2014-2020 programming period.

Despite a myriad of difficulties and setbacks in project implementation in the recent years, PKP PLK should be praised for the great efforts it had gone to in an attempt to structure the investment process in terms of the company’s responsibilities and competencies, according to the authors of the report. The company introduced a considerable number of key changes, including prior preparation of official project plans, improved supervision of the project process and a greater participation on the part of investors in the process of securing administrative decisions.

As a result, a vast number of projects in the pipeline for the coming years will involve preparation works, and this can actually delay many of the planned investment tasks. The Long-Term Investment Plan for the Railway Sector (WPIK) comprises as many as 32 preparation projects. The tasks involve the development of feasibility studies for 23 projects, environmental inventories (15 projects) and project documentation (2 cases). The value of the works exceeds PLN 500m (€120 million). In the future, these efforts will result in the construction of almost 7,000 km of railway tracks.

As far as the planning for construction works is concerned, the plans for 2014-2020 provide for increasing the role of revitalisation projects. Renewal projects will be the most numerous (a staggering 36 projects), which however will consume about one-quarter of the planned expenditure due to their lower capital intensity. From the organisational point of view, the projects are easier to carry out and take less time, though they do not represent a developmental progress in terms of the material scope. While renewal works do restore railway line efficiency, but they do not upgrade the original technical parameters. However, in the Polish context where a vast number of railway lines are in a very poor technical condition, even the more serious renovation works can really help improve the quality of travel.

In terms of value, renewal projects cost nearly four times less than upgrade projects and as much as seven times less than the development of greenfield railway lines. Therefore, the additional aspect of renewal projects is that they encourage greater activity on the part of medium-sized contractors. In many cases, these companies will be able to take part in tenders in the capacity of the main bidder, not just consortium partners or subcontractors. On the other hand, higher-value projects of key significance are handled by the major contractors.

Construction activity is expected to reach its highest levels in the Mazowieckie (€2.6 billion) and Slaskie (€2.2 billion) voivodships. Podkarpackie and Warminsko-Mazurskie are at the opposite of the scale. These regions will largely use funds from a special programme dedicated to the Eastern Poland macro region.