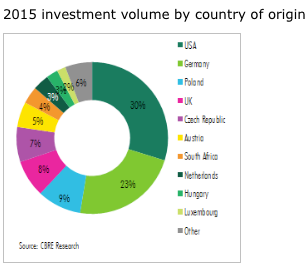 Investment into Central and Eastern European (CEE) countries (excluding Russia) for 2015 increased by 25 percent compared to 2014, reaching €9.9 billion. While year on year increases were expected, the overall performance exceeds forecasts and paints a picture of a solid rebound within all CEE countries.

Foreign investors continued to dominate the region, with US funds making large portfolio acquisitions, with an average volume size of €160 million.

The US accounted for 30 percent of investment into the region in 2015, compared to 23 percent in 2014, with US funds making investments in all core-CEE countries, as well as Latvia. The re-entry of core funds like Morgan Stanley and Goldman Sachs indicate increasing investor confidence in CEE. Germany was the second largest investor, accounting for 23 percent of all investment into the region last year, an increase from 12 percent in 2014. Germany’s presence can be attributed in part to the activity of Union Investment, who were the largest investor in the region in 2015.

The high levels of investment in 2015 did impact yields pushing them down. Cross-regional disparities in terms of pricing need to be assessed – while certain markets and sectors have almost reached the yields from the previous peak economic cycle (most notably Czech Republic and Poland), other countries have yet to reach their potential. As investment transactions for prime properties do not show any signs of slowing down, CBRE believes some markets may even see yields moving into a new territory, beyond those from 2007.

While outlook for 2016 is positive, a potential deterrent to the substantial growth in investment volume might be the scarcity of attractive product, available for transaction. As a consequence, office development in Warsaw and Bucharest is at record levels, making use of investors‘ and occupiers‘ interest in the markets.

Gijs Klomp, Head of CEE Investment Properties, CBRE, commented: “The strong investment volumes within the region are a result of US and German investors looking to take advantage of relatively high yields and strength of available stock on the market. In 2016 we expect this to continue as the stage is set for strong economic growth in the CEE, with relatively high yields compared to Western Europe and increasing interest from banks to finance in the region. In addition, the strong expansion seen in the retailers’ reported sales across the region will continue to keep retail investors interested. We also expect to see an increasingly diverse investor profile as Asian investors begin to increase their presence within the area.”

Irina Ushakova, Director of Capital Markets Department, СBRE in Russia, said: “The record high volume into commercial real estate in Western Europe (especially in the UK, Germany and France) for 2014-2015 was up 73 percent compared to 2012-2013 – has led to yield compression on those markets. As a result the capital shifted towards Eastern Europe, where markets offer higher levels of return on investment compared to Western. A similar shift has been recorded in 2005-2007, when American and western European capital started investing in Russia. Nevertheless, because of the geopolitical situation Western capital is refraining from transacting in Russia this time, despite the corrected values and increased level of yields, which are offered by the local market. With this background, Asian and Middle Eastern investors are interested in the Russian market, finding good opportunities in terms of yield level vs asset quality.”