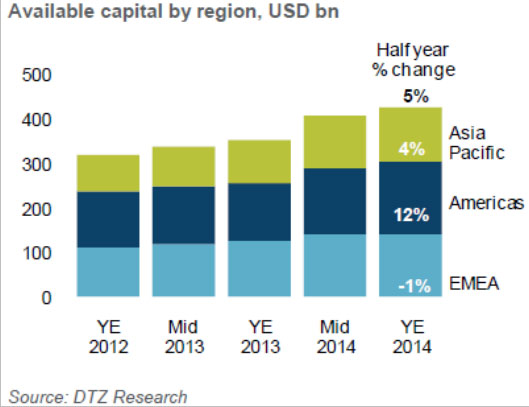 According to the DTZ’s Great Wall of Money report, total capital invested in commercial real estate reached a new global record of USD 429 billion at the end of 2014. This growth was supported by funds stemming from equity raising by companies. However, the growth rate of new measures fell to 5 percent at the end of December, from 15 percent in the middle of 2014.

The majority of capital raised was generated by funds targeting multiple property types. At the end of 2014, over 70 percent of funds invested in more than one sector, although the share of this group of investors shrunk by close to 10 percent compared with 2013. Funds targeting a specific asset class rose by 29 percent in the corresponding period.

In the case of funds dedicated to a specific type of property, the largest share in the portfolio was occupied by residential space (23 percent), industrial (19 percent) and retail (18 percent).

At the end of 2014, single country funds possessed the majority of available capital (59 percent), whereas 41 percent of capital accounted for funds seeking investment opportunities in multiple markets. This reverses the downward trend in these investors stake observed since 2012.

“The increase in new capital reflects a continued appeal of commercial real estate as compared to treasury bonds. With improving liquidity on the markets, we expect that investors’ demand will contribute to higher volume of investment transactions in the next 12 months,” said Craig Maguire, Head of Capital Markets, DTZ.