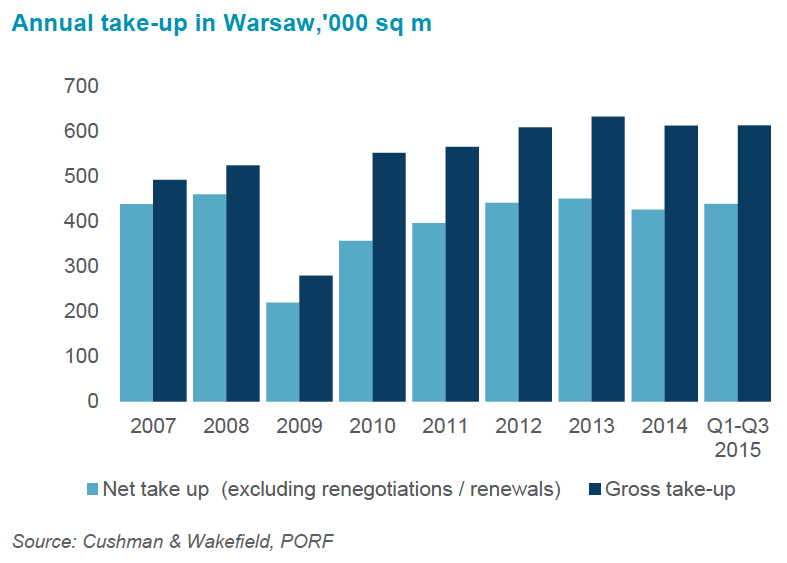 Record year for the office leasing market in Warsaw – EuropaProperty

According to the latest report from Cushman & Wakefield, leasing activity is still growing, and 2015 may see a record-breaking volume of office space take-up in Warsaw. In Q3 2015 alone, the leasing volume totalled 222,000 sqm and the vacancy rate fell for the first time since 2011.

According to Cushman & Wakefield’s report, in Q3 2015 the total volume of office lease transactions on the Warsaw market reached 222,000 sqm, which equals the value recorded last quarter and represents a growth of 36 percent compared to Q3 2014. Due to such strong occupier interest, 2015 can already be hailed as a record year in terms of gross take-up which has reached 613,000 sqm, equalling the volume recorded over the entire 2014.

The largest lease transactions in the first three quarters of 2015 included Samsung’s 21,000 sqm pre-let at the Warsaw Spire complex, PZU’s 17,500 sqm lease in the Konstruktorska Business Center and EY’s 13,500 sqm renewal at Rondo 1.

By the end of 2015, the total volume of lease transactions is expected to reach 800,000 sqm, which would be the highest value recorded so far on the Warsaw office market.

The growing demand is reflected in net absorption figures, which present the real change in the amount of office space occupied by tenants. The volume of net absorption recorded from January through September 2015 exceeded 220,000 sqm, representing a rise of nearly 25% on the value noted over the whole 2014. Assuming that the demand remains stable, the net absorption in 2015 may also reach a record-breaking volume.

As a result of strong demand, the vacancy rate in Warsaw dropped from 14.1 percent in Q2 2015 to 12.9 percent in Q3 2015, which represents the lowest figure since the beginning of 2014 and the first quarter-to-quarter decrease since 2011.

Office space supply in Warsaw is rising in line with the growing demand. In the first three quarters of 2015 nearly 240,000 sqm of office space was completed with occupancy permits, of which 90,000 sqm came to the market in Q3 2015 alone in four new office buildings, including Royal Wilanów (29,800 sqm) and Domaniewska Office Hub (27,000 sqm). This brought the total office stock in Warsaw to 4.63 million sqm. With 80,000 sqm scheduled for delivery by the end of 2015, this year’s annual supply may total 320,000 sqm, which will be the highest value recorded on the Warsaw market since 2001.

According to Cushman & Wakefield’s report, office supply is expected to grow next year due to strong developer activity with 430,000 sqm likely to be completed in 2016. However, some office projects scheduled for 2016 may be delayed. Strong development pipeline is likely to push vacancy rates up next year.

Office rents remained relatively flat in Q3 2015. Average prime rents in central districts stood at €22-24 /sqm/month and at €16-18 /sqm/month in buildings located close to Fringe borders. The monthly rent per square metre outside the city centre ranged between €13 and €15.5.

Richard Aboo, Partner, Head of Office department at Cushman & Wakefield, said, “The flattening of rental levels, especially in the older “class B” buildings, has triggered a surge in “new” demand as tenants, historically located in “C” class office space move to better quality space. This, coupled with a more optimistic outlook in the economy, is pushing tenants to rethink their real estate strategy and to consider relocating their offices to newer and better communicated office developments.

Katarzyna Lipka, Associate Director, Consulting & Research, Cushman & Wakefield, added, “Despite the record-breaking take-up volume noted in the first three quarters of 2015 and a decrease in the vacancy rate, the Warsaw office market remains a tenant-led market, which means that businesses leasing office space enjoy a stronger bargaining power in negotiations. This trend is likely to continue in 2016, which may lead to the pressure on rents, particularly in buildings of inferior location or schemes planned or under construction. As a result, next year will remain conducive to relocations and lease renegotiations.”