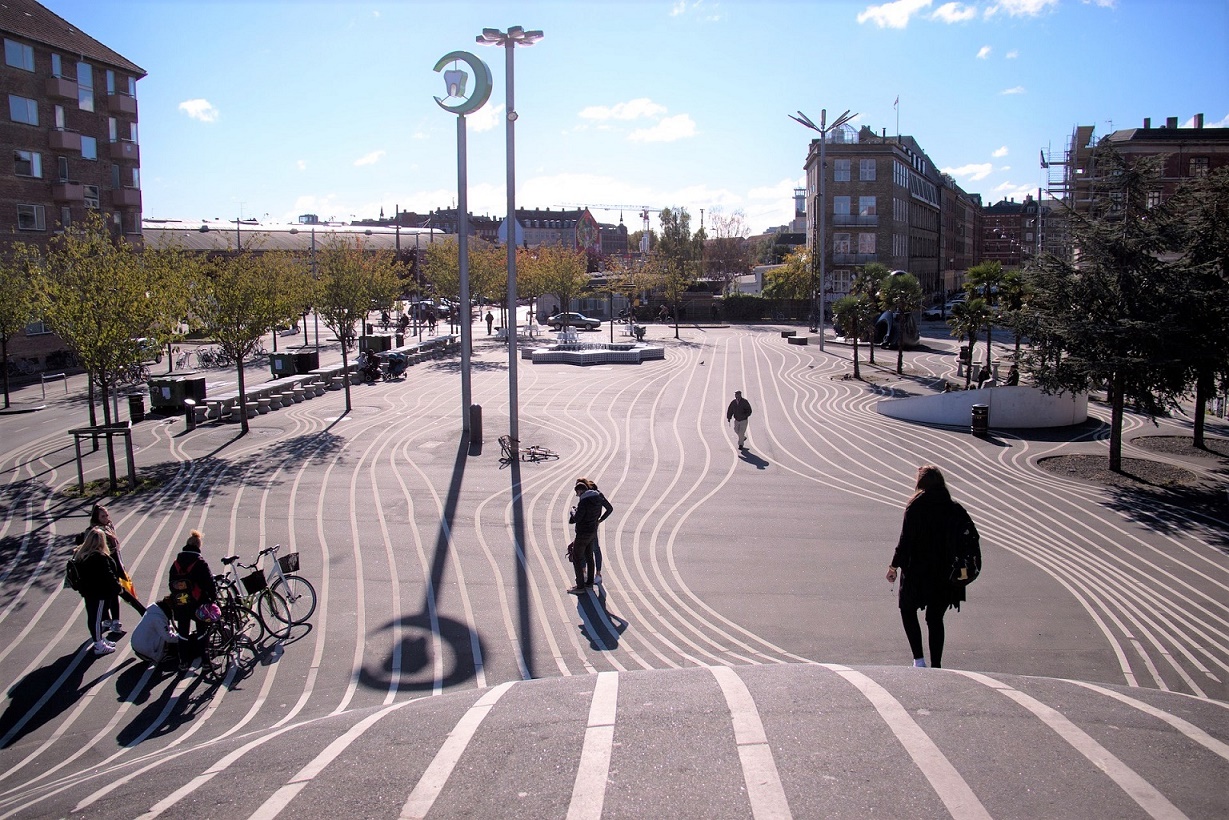 Urban space in the twentieth century belonged to cars. In the 21st century it has been reclaimed by people – this is how current urban trends can be summarised. Inward development, the narrowing of streets to expand space for pedestrians, the building of a dense network of cycle lanes and strengthening the role of public transport are some of the measures taken in modern cities to improve the lives of residents.

The progressing urbanisation and rapid development of cities mean that we are paying increasing attention to spatial planning. “Cities today must be more than just a collection of housing estates and office buildings. The quality, functionality and aesthetics of the surrounding space is extremely important. A city should not overwhelm, create barriers or restrict. Conversely, urban space should be planned so that it offers residents safe and comfortable living and working conditions and facilitates interacting with other people. Hence our cooperation with the Urban Land Institute, a global non-profit organisation that studies urban space and offers education in this area. The partnership between city authorities, developers and real estate consultancy companies with such organisations will play an increasingly important role in the future,” says Monika Rajska-Wolińska, Managing Partner at Colliers International in Poland.

The ultimate goal that contemporary urban planners and aware city authorities set themselves is the safety and comfort of people. Leading this are large Western European cities, where ‘human scale’ has become the leitmotif in the design of space. This translates into many areas: the dimensions and density of buildings, the layout and width of streets, transport, urban infrastructure, architecture of public spaces and buildings and parking policy.

One of the most significant trends is the recovery of urban space for pedestrians. In the 20th century, due to the rapid development of motorised transport and spatial policy, many European and American cities were rebuilt with whole blocks of buildings being demolished, which gave way to wide roads that dissected the urban tissue. Public squares were turned into car parks, and pedestrian crossings were placed above or below ground level.

“Today’s practices are completely opposite. Wide streets are being narrowed or moved out of central areas, and car parks are being hidden underground. They are giving way to attractively arranged public spaces – squares and boulevards that are designed only for pedestrians and cyclists,” points out Dorota Wysokińska-Kuzdra, Urban Land Institute Poland Chair. “These solutions are being implemented not only by city authorities, but also by developers, who are increasingly putting them into practice on their own. We can see this in the case of newly established housing estates, office buildings and shopping centres,” she adds.

Modern cities have changed their priorities. Today, in first place is not the car, but other means of transport with an emphasis on public transport and cycling. In Europe, trams are experiencing a renaissance, which are coming back into favour in countries such as France, the UK and Denmark, which gave them up several decades ago. Ground-based and underground rail transport is now the primary and preferred mode of transport in major cities thanks to its environmentally-friendly character and greater efficiency.

European cities are also investing huge resources in developing bicycle infrastructure, making it one of the most important modes of transport. Not only are ordinary cycle paths being built, but also bicycle expressways that are making cycling a much faster and more efficient way of getting around. In recent years, London has joined the group of the most pro-cycling cities, which includes Amsterdam and Copenhagen. The mayor of London, Sadiq Khan, has increased the budget for the expansion of bicycle infrastructure to GBP 770 million (approximately PLN 4 billion), which is twice the amount previously allocated for this.

One of the major problems faced by cities in the 20th and 21st centuries has been urban sprawl, the process of uncontrolled spread of a city into the area surrounding it. Classic examples are Asian and American cities, in which the suburbs sometimes stretch over several dozen kilometres. Polish cities are also facing the suburbanisation process. “This is a problematic situation for residents, local authorities and investors. Managing such an organism is becoming difficult, a city’s finances suffer and individual and public transport is much less effective, and therefore more expensive. People waste many hours on long journeys and in traffic jams, and chaotic building makes it impossible to create public spaces that are necessary for social life,” says Monika Rajska-Wolińska.

Western European cities that have adopted an inward development strategy have started to deal with this problem very well. Such a strategy limits the further development of suburbs, instead focusing on making existing built-up areas denser as well as revitalising existing urban infrastructure. Thanks to this, it is possible to reduce a city’s operating costs and improve the quality of life and the state of the environment, which suffers the most from suburbanisation.

According to urban planners, compact buildings have not only an economic but also a social justification.

“Compact urban design, or density, is a fundamental urban principle for our cities and societies. We can see that there are three main advantages when thinking dense cities. The first is the simple fact of physical proximity, allowing people to optimise their time between daily activities. A close neighbourhood also builds interactions and occasions between people, supporting relationships and the connection to local culture, commerce and recreation. The second is the pooling of common resources; hospitals, libraries, universities, shopping malls, shops, public transport, public spaces etc. With more people using these services, the cost of them is reduced and the collective demand is a strong incentive for continuous investment and improvements to be made. The third is the benefits of a shared identity amongst citizens. The feeling of belonging is more than local pride, but something that underpins mental health and empathy across society – a key indicator of a happy and sustainable city”, says David Sim, Creative Director in the Gehl studio, set up by one of the most influential modern urbanists, Jan Gehl.

Return to the centre

The effect of an inward development policy is to turn cities back to their centres. After decades of population outflow from inner-city areas to the suburbs, we are now observing the opposite trend: the revival of central city districts and the diversification of their functions. An important tool for local governments and urban planners in this is revitalization. “This takes place on many levels: it is not enough just to renovate the facade of a building, it must be followed by functional changes and then it has to be activated,” says Monika Rajska-Wolińska.

Good examples in Poland are Lodz and Warsaw. “In Lodz, we have excellent projects to revitalise whole post-industrial complexes for housing, offices, retail and services that are very popular as places to work and live. Meanwhile, in Warsaw a similar area is Wola in the vicinity of the Daszyński roundabout and Towarowa, Prosta and Karolkowa streets, where in recent years modern housing estates and office complexes have been built on a large scale in post-industrial areas, and soon high-class retail and service facilities will be completed,” says Monika Rajska-Wolińska.

Car parking as a planning tool

A very important tool in contemporary spatial planning is parking policy, which determines not only where cars are parked. “Local authorities can use parking to indirectly influence the transport decisions of residents. Current research shows that the cost and availability of parking spaces in large cities has a greater impact on the choice of transport than anything else,” points out Dorota Wysokińska-Kuzdra. “Municipal authorities can shape parking policy, for example by setting up paid parking zones and regulating the number of parking spaces and their cost. Properly carried out, it can translate into reducing traffic jams and air pollution and increase the quality of public space. This in turn affects not only the comfort of people’s lives, but also the competitiveness of cities for investors,” she adds.

In many Western European cities, parking can be quite expensive, not only on weekdays, but also on weekends and holidays – this is the case in cities such as Copenhagen, Paris, Munich, Oslo, Helsinki, Barcelona and Madrid. Parking fees converted into zlotys can range from PLN 12 to over PLN 20 per hour. In Amsterdam, it is necessary to pay for parking 24 hours a day. Recently, the authorities in the Dutch capital announced that there will be fewer parking spaces, and by 2025 as many as 10,000 may disappear. They will be replaced with wider pavements and greenery.

“Fewer parking spaces do not necessarily mean more parking problems. As in the case of roads, the Lewis-Mogridge law applies here. According to this theory, expanding streets does not in the long run lead to a reduction in traffic jams, as the number of cars using them just increases. The same is true for parking spaces – an increase in their supply affects demand because it encourages people to drive. Paradoxically, the best solution to the problem of parking in cities is a reasonable reduction in the number of parking spaces, the expansion of paid parking zones and the differentiation of tariffs that correspond to real demand. Modern parking policy is heading in this direction,” says Dorota Wysokińska-Kuzdra.

An example of a strict policy comes from the City of London, where more parking spaces than planners have allocated cannot be built. That’s why The Shard, the tallest building in the European Union, which is 309m tall and has 95 floors, has only 48 parking spaces. Cities that have adopted even stricter standards include Hamburg, Zurich and Boston. The authorities in these cities have frozen the existing number of parking spaces in their centres and have introduced an exchange system whereby each new space built in an underground car park will mean that one street level space will be removed.

“Although the many changes that have taken place in recent years in European cities may seem like restrictions, they all have one common goal, which is to improve the quality of urban space, and thus to increase the comfort of our lives,” summarises Monika Rajska-Wolińska.