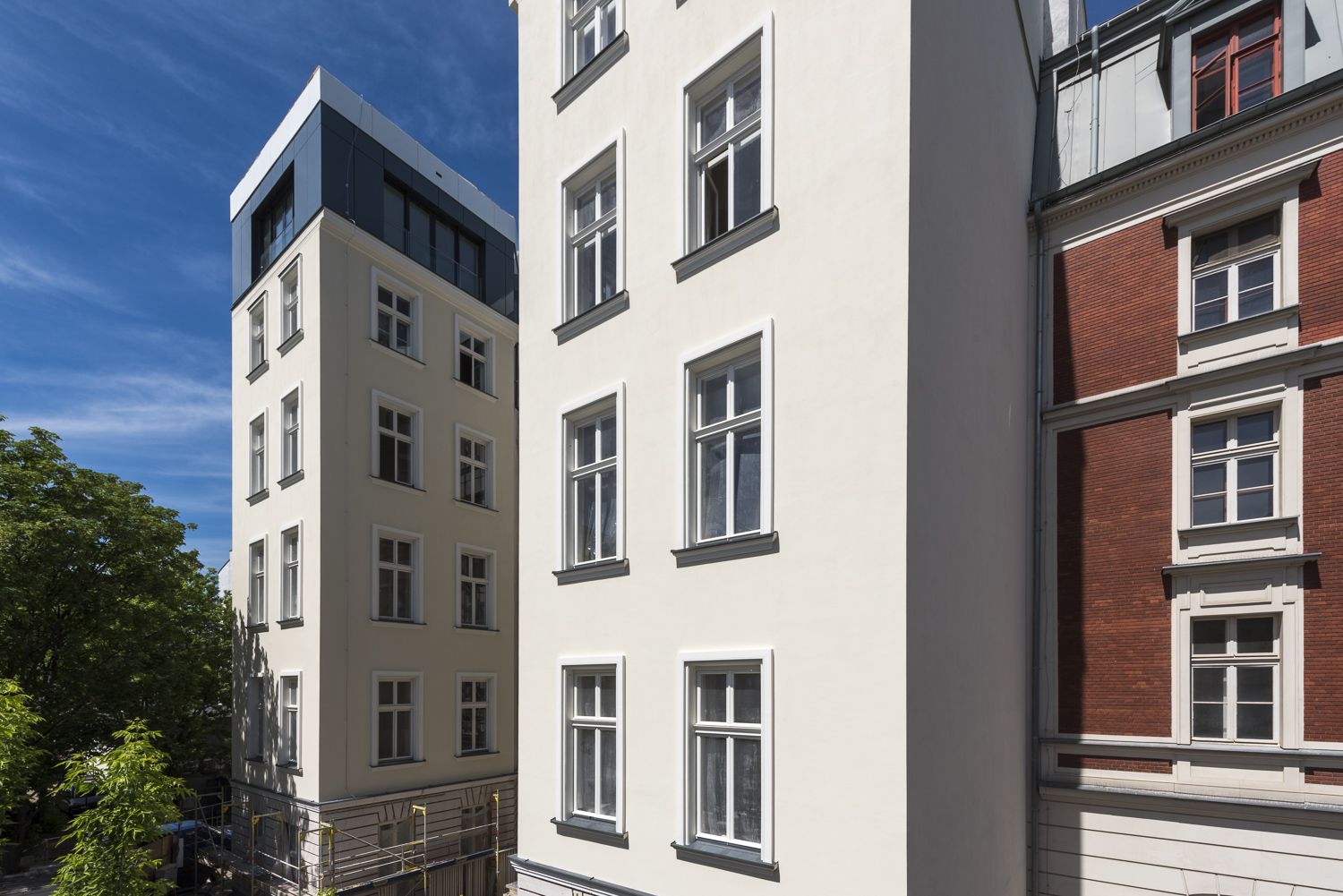 Completion of works on the two historical tenement houses at Foksal 13 and 15 is coming up. The next stage of revitalisation is drawing to a close – the facades from the south side have gained a completely new look. It perfectly reflects the character of the project combining respect for historical matter with modernity and top-notch design.

The 19th century residences at Foksal 13/15 are now being tailored to the needs of modern users without damaging its precious historical fabric. Both buildings are true pearls of belle époque architecture. Hundreds of architectural details and finishing elements have survived in the interiors, giving the space a unique character. The developer, Ghelamco, entrusted the renovation project to architect Anna Rostkowska, a prominent expert in historical architecture. Eric Kuster, a world-renowned Dutch designer, was also invited to cooperate on the project with respect to designing the interiors of common parts.

The south facades of both tenements – located from the interior side of this area of the city – have just been unveiled from scaffoldings. As a result of the renovation, the outbuilding with number 15 has gained a modern, minimalistic look with large balcony windows which add lightness to the building’s body. The glass in aluminium joinery enables excellent lighting of the interior with bright southern light. The facade was designed by a renowned studio Sud Architectes. Thanks to its universal simplicity and elegance, it harmoniously fits with the historical character of the project. The materials with excellent properties used for finishing the walls, namely stone and marmoglass, give the building a luxury look.

The courtyard part of residence at Foksal 13, on the other hand, has retained its historical style – only the built-on floor is finished according to latest trends. New windows have been fitted in the most southward top walls, which have been blind until recently. The facade is decorated with delicate bands, bossage and cornices. Also the original cast iron slabs and balcony balustrades are being carefully renovated. After cleaning and supplementing the missing elements, they will become a magnificent ornament. The plastered exterior wall has been painted with special silicate paints dedicated to historical buildings.

Soon also the representative facades from Foksal Street will gain their ultimate look – they are planned to be unveiled this summer.

Foksal 13/15 is a luxury apartment project which Ghelamco is delivering in the historical centre of Warsaw. The tenement houses were built in the years 1895-1898 based on the design by Artur Otton Spitzbarth. Both back then and now, it has been one of the most prestigious addresses in Warsaw, at which Warsaw’s aristocracy and intellectuals had their palaces and apartments.

In their long history, the residences at Foksal 13/15 have been home to many prominent persons from the worlds of culture, science, politics and business, among others Bolesław Eiger, Stefan Napierski, Zygmunt Badowski, Kazimierz Kubala or Stanisław Grabski. In the 30s of the 20th century, the tenement at Foksal 13 became property of Jan Wedel, the famous Polish entrepreneur and “King of Chocolate”, who redeveloped it and equipped it with modern solutions, among others Warsaw’s first panoramic lift.

The project’s unique character lies in the wealth of authentic 19th century elements which survived in the interiors. The staircases are decorated with sculpted overdoors and portals, white marble floors, and hand-forged balustrades. Equal wealth of details can be found in the apartments, whose interiors are nothing short of aristocratic residences.

The revitalization project was designed by architect Anna Rostowska, a prominent expert on historical architecture from Proart studio, in association with the renowned studio SUD Architectes. The investor invited Eric Kuster, the renowned Dutch designer from Metropolitan Luxury, to arrange the interiors. His designs perfectly combine the classic and the modern. Eric Kuster’s portfolio includes prestigious projects for famous singers and athletes.

Foksal 13/15 will provide its future tenants with numerous comfortable amenities, including a leisure zone, fitness room, and spacious terraces on the top floors, overlooking the centre of Warsaw. A yet unseen solution will be guest rooms, where the tenants will be able to put up their guests or business partners for the night in comfortable conditions. A garage for 60 cars has been built under the property. The project’s fine character will be complemented by concierge services.